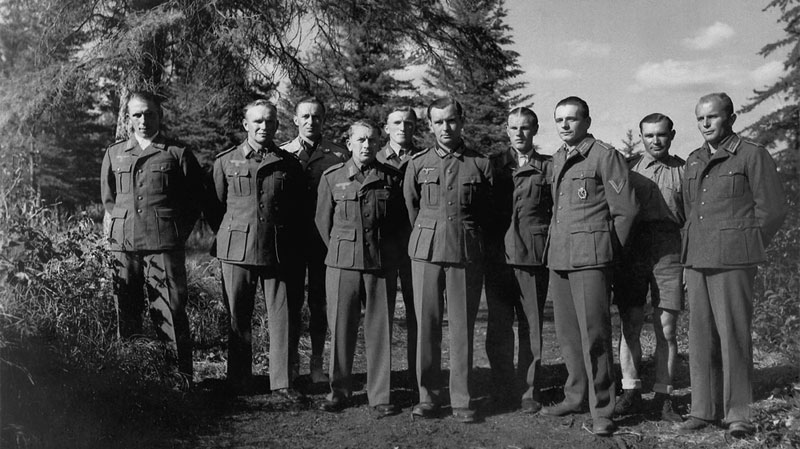 German prisoners of war who spent much of the Second World War in a Manitoba logging camp purchased mail-order items from the Eaton's catalogue, kept themselves impeccably groomed and even staged "temporary" escapes into the nearby countryside.

Those are just some of the findings of a three-year archeological dig in Riding Mountain National Park, located about 300 kilometres northwest of Winnipeg, where the Whitewater PoW camp was located.

Adrian Myers, a PhD student from Stanford University, has been leading the project since 2009, when he first arranged an agreement with Parks Canada to access the site which had sat neglected and abandoned for decades, little more than a few overgrown foundations still visible.

The site was once a bustling wilderness work camp housing about 500 people. About 450 German Afrika Korps soldiers were sent to the camp after their capture in October 1943 during the Second Battle of El-Alamein in Egypt. They were kept at the camp until October 1945.

The PoWs were shipped to Canada from England on returning troop carriers, as Britain farmed out tens of thousands of PoWs to its allies and former colonies.

"Some of them had fought in the eastern front in Russia, in France, in Europe and then in Africa for the most part," Myers told CTVNews.ca by cellphone from the park.

"We do know that the prisoners on the whole were delighted to be captured as PoWs and brought to Canada, taken out of brutal conditions and brought to a paradise compared to where they'd been before."

Myers, who is from B.C., spent the summer of 2009 surveying the site, which once held 15 log buildings, forestry equipment and teams of horses to haul the logs.

After it was shut down in 1945, the government auctioned off everything it could, and local residents then scavenged anything they could use. Nature did the rest, essentially reclaiming much of the site.

In 2010, the second phase of the project, Myers began sinking test excavations and mapping the location, essentially creating a digital model of the site as it would have appeared in the 1940s.

And this summer, Myers and his team of volunteers are carrying out full-scale excavations of the location -- particularly in the areas where the camp's garbage was dumped.

The results have been fascinating.

In addition to finding items such as plates, cutlery, tin cans and bottles, they've also found a surprisingly high volume of items one would not necessarily expect to find at a rough-and-tough PoW logging camp deep in the wilderness.

"Were finding large volumes of personal grooming products. So it appears they were really taking care of how they looked and how they smelled. We've got toothbrushes, combs, face cream, we've got cologne, aftershave, razors, all these kinds of things," he said.

"It's an intriguing situation because they're in a bush camp but they're really taking care of their appearance."

That fits with historical photos from the camp, which show well-groomed German soldiers posing in their formal dress uniforms.

The dig even turned up an Eaton's mail-order catalogue from 1943 -- likely the source of the products which the PoWs would have purchased with their .50 cents a day in pay.

"On a daily basis we're pulling things out of the ground that we can compare to the Eaton's catalogue by flipping through the pages, and we're finding them," he said.

The dig has also turned up evidence of some contraband activities. Beer bottles and whiskey flasks -- liquor was officially banned at the camp -- have been found in abundance, along with evidence that suggests the camp dentist may have doubled as a moonshiner, something that fits with oral accounts that have been passed down over the years.

In addition to the hard, physical evidence turned up at the site, Myers has also managed to track down the few surviving PoWs who were imprisoned at the camp to collect their stories.

Of the 10 he has located -- the youngest is 89 -- Myers has spoken with four. And interestingly, the common thread is that all of the former PoWs have fond memories of their time at the camp.

"The fellows I talked to in Germany, at least a couple of them said they'd always wanted to move back and it never happened. And in all four cases they said it was a wonderful time to be in Canada and out of the war," Myers said.

Whitewater was one of numerous satellite PoW camps set up across Canada, in addition to several large, higher capacity facilities.

Established under an agreement that Parks Canada would get free labour from the prisoners in exchange for the use of the land, it was designed as a low-security facility. The PoWs would cut and stack firewood, which was then hauled to the nearest Canadian National Railway line, where it was loaded on train cars for transport.

There were no fences around the camp, and it was sufficiently isolated that it was believed escape wasn't an option.

Several PoWs did eventually manage to escape, but what was more common, Myers said, were "temporary escapes."

"PoWs would sneak out after evening rollcall and return by morning rollcall, and they'd be doing things like going for walkabout, or going out, leaving the park and finding towns," Myers said.

"And there are stories of them joining local barn dances. There's even a fellow still alive out here who took a PoW out for a beer."

That information has led Myers to a second intriguing theory. The Riding Mountain area of Manitoba was settled largely by Eastern European immigrants, including many Ukrainians, who would have been relatively new arrivals at the time.

Perhaps due to a belief that the Germans would eventually unseat the tyrannical Russians who were occupying Ukraine at the time, there was a relatively sympathetic attitude towards the PoWs among locals, Myers said.

"They don't seem to have been seen as enemies, really," he said, noting that in many other parts of the country the sentiment was clearly the opposite.

Once Myers has completed the summer's dig, he will begin the process of examining and archiving the items, working at Simon Fraser University in B.C. From there, he will carry out further research at the National Archives in Ottawa, conduct additional interviews with the few surviving PoWs, and write a dissertation based on his findings.

The overarching objective, he said, is to rescue a part of the story that simply isn't told in the documents and data that tell only one side of the PoW camp's story.

"But through historical archeology the goal would be to recover the story of the prisoners, not necessarily through the archival research but through the remains, through what they left behind at the camp."