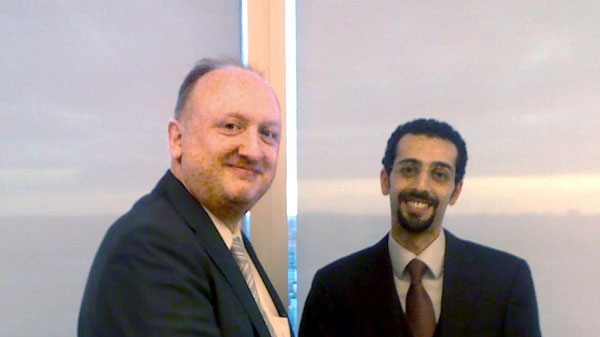 In this file photo, Danish daily newspaper Politiken editor Toeger Seidenfaden, left, shakes hands with Saudi Arabian Lawyer Faisal Yamani during their meeting in London on Thursday Feb. 25, 2010. The Politiken newspaper said Friday Feb. 26, 2010, that it had handed over an official apology from the newspaper for reprinting cartoon images of the Prophet Muhammad with a bomb-shaped turban, in their newspaper.(AP PHOTO/POLFOTO, PER MAGID)

COPENHAGEN, Denmark - Thirty-eight staff members of Danish daily Politiken say they are against the newspaper's apology for reprinting a cartoon of the Prophet Muhammad with a bomb-shaped turban.

In the letter published in Saturday's paper, the news staff say the paper "has nothing to apologize for," and that "it gives the impression that we regret our journalism."

Politiken last week apologized for offending Muslims with the 2008 reprint that came after police uncovered an alleged plot to kill its creator, cartoonist Kurt Westergaard.

The apology was part of a settlement with a Saudi lawyer representing eight Muslim groups in the Middle East and Australia who sued Politiken in Denmark for offending Muslims. Politiken has around 200 staff members.

Islamic law generally opposes any depiction of the prophet, even favourable, for fear it could lead to idolatry.