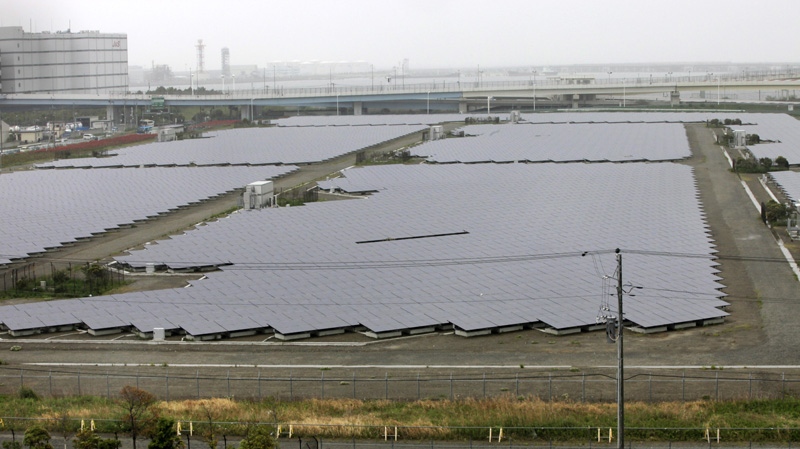 In this Wednesday, May 2, 2012 photo, solar panels cover the 11-hectare compound of the Ukishima Solar Power Station in Kawasaki near Tokyo. (AP Photo/Itsuo Inouye)

TOKYO - Another long, stupefyingly hot summer is looming for Japan just as it shuts down its last operating nuclear power reactor, worsening a squeeze on electricity and adding urgency to calls for a green energy revolution.

On Saturday, the last of the country's 50 usable nuclear reactors will be switched off, completely idling a power source that once supplied a third of Japan's electricity. At a time when temptation to set the aircon to deep freeze is at its greatest, companies and ordinary Japanese will be obliged to economize amid temperatures that can climb above 40 degrees Celsius (104 Fahrenheit).

Nuclear energy seemed a steady mainstay of Japan's power supply until the March 11, 2011, tsunami crippled the Fukushima Dai-Ichi plant in the worst atomic accident since the 1986 Chernobyl explosion. Authorities have since tightened safety standards and refrained from restarting reactors that were shut down, mostly for routine checks.

To offset the shortfall, utilities have ramped up oil- and gas-based generation, giving resource-poor Japan, the world's third-largest economy, its biggest annual trade deficit ever last fiscal year. That $100 million-plus a day extra cost, worries over the risks of nuclear power and concern over carbon emissions are leading many decisionmakers to view renewable energy such as solar, hydro and wind more positively.

Prime Minister Yoshihiko Noda has pledged to reduce Japan's reliance on nuclear power over time. And Japan is debating renewable energy targets of between 25 percent to 35 percent of total power generation by 2030, looking to Germany, which raised the proportion of renewables from 5 percent in 1990 to 20 percent by 2010.

"If Japan has the motivation, it can do this, too," said Sei Kato, deputy director of the Environment Ministry's Low Carbon Society Promotion Office. "We have the technological know-how. Japan can do anything that Germany can."

Real change has been slow. Giant solar arrays and wind farms can't be built overnight and powerful utilities that spent billions on nuclear are lobbying to protect their interests. The government is muddling along, seemingly unable to take a decisive stand either way as opinion becomes increasingly polarized between mavericks calling for massive investment in alternative energy sources and big business interests that favor keeping Japan Inc. nuclear powered.

Many believe Japan has little choice but to restart nuclear reactors even in the face of spirited public opposition. Utilities predict power supplies could fall 16 percent below demand in western Japan during the summer peak.

The government is eager to restart some reactors in coming months if it can persuade skeptical local leaders and residents that they are safe.

"The bottom line is that without nuclear power Japan will have a very hard time meeting demand," said Paul Scalise, a fellow at the University of Tokyo who specializes in Japan's energy sector.

Oil, coal and gas now generate about nearly 90 percent of Japan's electricity, with hydropower accounting for about 8 percent and other renewables - solar, wind, geothermal and biomass - making up the balance.

Hiroshi Hamasaki, an energy expert at Fujitsu Research Institute, estimates that with stable "feed-in" tariffs, which guarantee renewable energy producers a fixed price for their power, renewable energy generation could surge by 200 times over the next three years.

"There will be a boom close to a bubble, with many companies rushing to enter the market over the next three to five years," Hamasaki said.

Although experts are enthusiastic, green energy in Japan still faces numerous obstacles and headwinds. Besides the nuclear industry's vested interests, those barriers include stifling regulations, a power grid ill-suited to accommodating volatile solar and wind energy, and the huge upfront costs of building solar or geothermal plants. Both are technologies in which Japan is a world leader, although it has lost out to China in solar cost competitiveness.

To help move things along, the government is easing restrictions on land use for solar and wind power. It also is relaxing regulations on small hydropower projects and regulations on drilling for geothermal energy in national parks.

More crucially, last week it approved feed-in tariffs that are expected to spur investment by guaranteeing higher returns for renewable than for conventional energy.

From July, utilities will be required to buy electricity from renewable energy from providers at a rate of 42 yen ($0.52) per kilowatt hour (kwh) for solar energy, 23 yen/kwh for wind power and 30-35 yen/kwh for small-scale hydropower. These preferential rates will apply for 10 to 20 years depending on the energy source.

Most of those higher rates will be passed on directly to consumers.

That business incentive is essential, said Masayoshi Son, a telecoms tycoon and leading proponent of renewable energy. He said the rates were a "good start," adding that if prices were any lower, "Japan would likely never see a new energy era."

The company has begun building five mega-solar plants across the country, with output capacity of 2.1 megawatts to 2.8 megawatts. The first will begin operations as soon as July 1. That is still just a fraction of Japan's 3.5 gigawatts of installed solar capacity.

A vocal critic of Japan's business establishment for years, Son has publicly blasted Japan's regulators and utilities for working together to block new entrants and keep the power rates consumers pay high.

But the heavy political influence once exerted by the country's "nuclear village" of power companies and regulators is waning, experts say.

"Before, many companies were reluctant to move toward renewable energy because they were afraid of displeasing the utilities, but that has changed," said Koichi Kitazawa, head of an independent commission investigating the Fukushima crisis and former president of the Science and Technology Agency.

Many of Japan's biggest corporations, from steel mills and automakers to ceramics and electronics makers also are developing renewable technologies, often incorporating solar and wind power features into their own offices and factories.

Most renewable initiatives remain piecemeal, such as a "smart community" plan for Kamaishi, a tsunami-hit city planning to rebuild as an eco-town powered by solar, wind and other renewable energy.

Unlike a European country such as Denmark, which has pledged to shift entirely to renewable energy by 2050, Japan is an island isolated from neighboring countries. An Asian "super grid" proposed by Son that would link Japan to mainland Asia, and massive wind power capacity in the Gobi desert, will take years and could prove prohibitively expensive.

Even Son concedes that renewable energy is going to serve only a small percentage of electricity demand over the next few years.