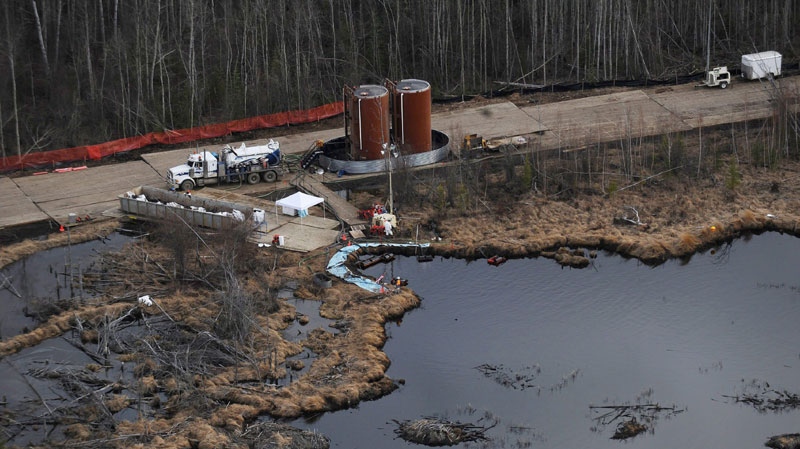 Aerial photos of the cleanup of the Rainbow pipeline break northeast of Peace River, Alta. on May 4, 2011. (THE CANADIAN PRESS/ Ian Jackson)

EDMONTON - The owner of an oil pipeline that caused the second-largest spill in Alberta's history says the problem is fixed and the company has applied to reopen the line.

Plains Midstream Canada has asked the province's Energy Resources Conservation Board for permission to start sending oil down the Rainbow line -- three months after it leaked 4.5 million litres of oil into the northern Alberta wilderness.

"The ERCB received a formal request from the company to restart Rainbow pipeline operations," board spokesman Darin Barter said Thursday.

"The ERCB will conduct a thorough assessment of all the materials submitted to the ERCB to determine if the pipeline can be safely returned to operation and operate within all regulatory requirements."

A spokesman for the aboriginal band living nearest the spill said Plains Midstream hadn't shared that material with them.

"They've actually refused to give them to us," said Garrett Tomlinson of the Lubicon Lake Nation at Little Buffalo.

In an emailed statement, a Plains Midstream spokeswoman said the company had complied with all the board's requests.

"Plains has fully co-operated with the ERCB and other regulatory and government agencies," said Victoria Person. "We remain committed to working on the site until the land is properly restored to meet all applicable environmental standards and we will continue to monitor the site for years after."

The company also said it has been in regular contact with First Nations leaders, including providing clean-up updates and tours of the spill site. It says some First Nations community members have been involved in the clean-up operations.

A leak on the 772-kilometre, 44-year-old line between Zama, Alta., and Edmonton was first detected April 29 and the pipeline was shut down.

Early estimates suggested that only several hundred barrels of oil had spilled. It wasn't until four days later that the energy board reported the full extent of the leak from a centimetre-wide crack around the bottom of the pipe.

Witnesses who flew over the site reported that oil was running into a muskeg area about the size of two football fields. The black outline of the oil was clearly visible around the edge of the water, bordered on one side by a beaver pond that some credited with preventing the spill from being worse.

A school in the nearby First Nations community of Little Buffalo was closed for days after people reported getting headaches, feeling nauseous and smelling a strong petroleum odour. However, both the company and the government said all air-quality readings remained within acceptable limits.

Company officials have suggested the leak stemmed from maintenance done on the pipeline last year, when soil was packed in a way that led the pipe to settle and eventually break.

The shutdown immediately rippled through the northern oilpatch, causing producers to suspend shipments that would have normally gone down the line. Some companies stored more oil on-site and some were forced to truck crude south.

The Northwest Territories town of Norman Wells, which depends on natural gas from nearby oilfields to heat its homes and businesses, was forced to declare a state of emergency after that gas was no longer available.

Plains Midstream says it has recovered just under half the leaked oil since the spill. Contaminated soil has been removed and affected ponds have been drained.

Small backhoes are removing remaining pockets of oil from pond and stream banks. Vacuum trucks are sucking up fluids that drained into containment trenches.

A total of 74 workers are still on the site.

Tomlinson said communications between the company and the band have slowed to a near-standstill and the band has no way of assessing the cleanup for itself. He said Plains Midstream said it would share its report with the band after ERCB approval and not before.

"Plains has largely kept us at a standoff," Tomlinson said. "The good momentum we had in the beginning on communicating has been lost.

"It's something we've explained to the ERCB at length, that it's not good enough."

The company said it has been in regular contact with First Nations leaders, including providing clean-up updates and tours of the spill site. It says some First Nations community members have been involved in the clean-up operations.

Barter said there's no timeline for a decision on whether the line can be reopened.

Before the leak, the Rainbow line carried an average of 187,000 barrels of oil a day.