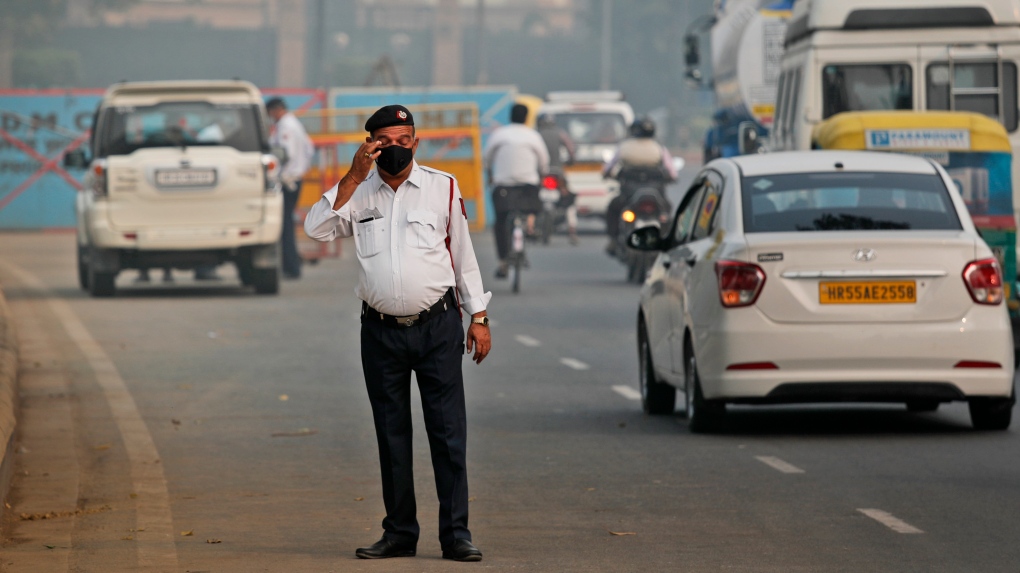 In this Nov. 4, 2019, file photo, a traffic officer wears a pollution mask and clears the irritants from his eyes in New Delhi, India. (AP Photo/Manish Swarup, File)

NEW DELHI -- India is facing two public health emergencies simultaneously: critically polluted air and the pandemic. And Surinder Singh, a bus driver in the capital New Delhi, is trapped between them both.

In previous years, the government encouraged more people to use buses that run on cleaner fuels, like the one he drives, as an emergency air quality measure. But this year there are limits on passengers to maintain social distance. The air stings Singh's eyes and he worries about contracting the virus every time a person gets on board.

Still reeling from India's harsh lockdown that dried up his US$9 daily income for two months, the 47-year-old father of two says he has no choice but to work. Masked and armed with a bottle of hand sanitizer, he starts his journey near a private hospital that is overwhelmed by virus patients. He travels through roads packed with traffic to the city's largest and most frenetic railway station.

In this Nov. 4, 2019, file photo, a traffic officer wears a pollution mask and clears the irritants from his eyes in New Delhi, India. India is grappling with two public health emergencies: critically polluted air and the pandemic. Nowhere is this dual threat more pronounced than in the Indian capital New Delhi, where the spike in winter pollution levels has coincided with a surge of COVID-19 cases. (AP Photo/Manish Swarup, File)

"I drive the bus in constant fear," he said.

Millions of others are equally desperate in India's historic recession. The economy contracted by 23.9% in the April-June quarter -- its worst performance in at least 24 years -- and by 7.5% in the next quarter.

The virus, meanwhile continues to spread with over 9.7 million cases, and more than 140,000 deaths. And India's underfunded hospitals, already strained by the virus, are also filling up with patients in respiratory distress from air pollution.

The pandemic has made emergency measures, such as boosting public transit, harder to implement. And long-term targets, including weaning power plants from dirty fossil fuels, are taking a back seat. India plans to increase coal production to reduce imports, and its recovery plan remains heavily reliant on energy sources that produce carbon emissions.

"This pandemic will define the pathway of how we move in the future (to control air pollution)," said Sunil Dahiya, an analyst at the advocacy group Centre for Research on Energy and Clean Air.

India's environment ministry did not respond to requests for comment.

The dual threat is particularly pronounced in the Indian capital New Delhi, where the annual spike in winter pollution levels has come amid a surge in new COVID-19 cases. The city is among the most polluted in India, where an estimated 1.67 million people die annually from bad air. Dr. Akshay Budhraja, a pulmonologist at a private hospital here, said it was flooded with patients with respiratory distress who thought they had COVID-19. "Patients are very, very anxious," he said.

The Delhi pollution gets worse in the fall and winter when the burning of crop debris in neighbouring states coincides with cooler temperatures that trap smoke close to the city. Over 76,000 farm fires were spotted by satellites in Punjab state -- the most since 2016 -- and Delhi's air quality levels in October were worse than previous years, government data shows.

Although the city of 29 million people and 10 million cars is enveloped in smog, authorities have fewer options than before the pandemic. Last year, authorities had restricted some of the capital's private vehicles and increased public transportation. But this year, standing passengers aren't allowed in Delhi's buses, and metro coaches are only allowing about 50 people, compared to a maximum of 300 in the past. Anumita Roychowdhury, a director at the advocacy group Centre for Science and Environment, estimated that public transit is operating at a third of capacity overall.

The pandemic also has hindered efforts to clean emissions at coal-fired power plants, which account for 65% of India's electricity. The government had asked plants to install technology that would remove sulfur dioxide from their emissions by 2022. But after initial delays from problems in getting loans, the pandemic snapped supply chains and made it impossible to import the required equipment, said Ashok Kumar Khurana, who heads the Association of Power Producers.

India's power ministry has sought a deadline extension from the environment ministry while the government has undertaken measures aimed at boosting coal production. In June, Indian Prime Minister Narendra Modi announced the auction of 40 new coal leases to private miners. Modi described this shift from India's state-controlled coal industry as "freeing the coal sector from decades of lockdown."

Last year, the government asked the state-run Coal India to increase the annual production from the current 661 million tons (600 million metric tons) to over a billion tons by 2024. To make the transition to domestic coal easier, it has also waived regulations that mandated a federal environment ministry review if a power plant wanted to change the type of coal being used.

Much of India's coal reserves have a high ash content that burns inefficiently and results in increased emissions and air pollution, said Roychowdhury. India is the third-highest emitter of carbon dioxide, behind China and the United States.

These are efforts to save "an industry that is already circling the drain," said Kanika Chawla, an energy policy expert at the New Delhi-based think-tank Council on Energy, Environment and Water. Before the pandemic, India's power plants were running below capacity because the growth in power production capacity had outpaced demand.

With demand dipping further, Chawla said that the government had an opportunity to pivot away from fossil fuels and accelerate a "just" transition to cleaner fuels. "We were clearly at a crossroad," she said.