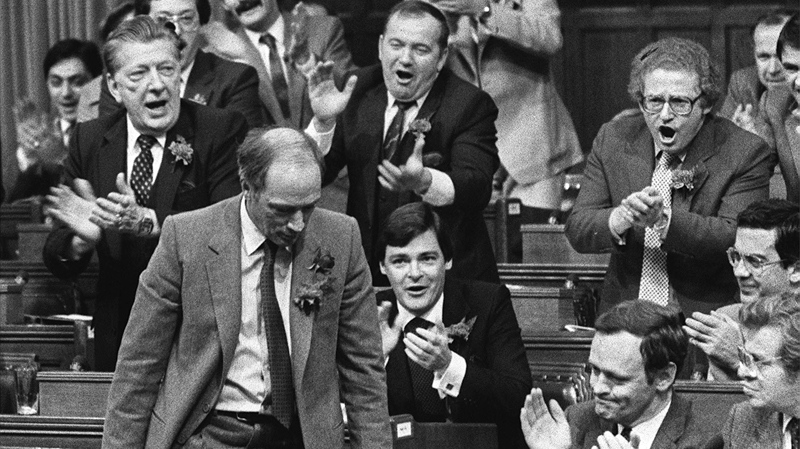 Prime Minister Pierre Trudeau gets a rousing cheer from his cabinet members after a vote in favour of passage of the constitution 246-24 in the House of Commons in Ottawa, Dec. 2, 1981. (Andy Clark / THE CANADIAN PRESS)

OTTAWA - The CIA secretly painted Pierre Trudeau as a politician torn between being a leader of the Third World and a genuine player with global industrialized nations, declassified records show.

The January 1982 assessment of the Liberal prime minister's ambitions is among several detailed -- and until now virtually unknown -- analyses of the Canadian economy by the U.S. Central Intelligence Agency.

Through the U.S. Freedom of Information Act, The Canadian Press obtained more than a dozen CIA reports that explore various aspects of Canadian commerce, industry and technology during the Cold War era.

The assessments reveal a keen interest in Canadian affairs on the part of an agency better known for waging a covert war against East Bloc spies in the decades leading up to the 1989 fall of the Berlin Wall.

Despite the passage of time, portions of the records were considered too sensitive to disclose.

The CIA's directorate of intelligence prepared a pair of confidential studies of the Canadian economy in April 1972 in advance of a meeting between Trudeau and then-U.S. president Richard Nixon. One study noted pressure was mounting in Canada for control over foreign investment -- a dominant theme of the time -- "despite a continuing need for additional funds to further Canadian development."

A decade later the CIA crafted an incisive analysis of a faltering Canadian economy for the U.S. trade representative.

"With a domestic market about the size of California's, Canada is sensitive about living in the U.S. economic shadow," says the January 1982 assessment, which explored Liberal government efforts to bolster Canadian control of key sectors, including energy and technology.

"Politically, Trudeau frequently appears torn between the urge to play leader of the Third World and the desire to hold his own with the industrial giants. Economically, however, he clearly wants Canada to jettison its Third World image."

Canada would never have been a principal target of U.S. intelligence collection efforts, but clearly turned up on the American radar screen from time to time, said Wesley Wark, a University of Toronto history professor who took part in an April conference on the history of the CIA and its place in politics and culture.

The document illustrates that the Americans will sometimes use clandestine methods "to find out things about Canada that they want to know," said Wark.

The CIA took considerable interest in Canada's mineral industries, producing a May 1972 study that weighed trends and implications, concluding the country was in excellent position to further its position as the world's leading mineral exporter. However, Canada would continue to rely on U.S. markets and long-term capital.

Long before Canada's western tar sands became familiar to the world, the CIA recognized the "enormous amounts of oil" along the Athabasca River, probing possible Japanese interest in the deposits in an October 1972 memorandum.

"The sands rank with the U.S. shale deposits as the world's most extensive known, largely untapped oil source," says the memo, which includes a map of the deposits and presciently forecasts environmental concerns over the project.

"The pollution issue and opposition to defacing Alberta's landscape may arise but has not as yet."

One of the earliest and most extensive CIA studies of Canada was a 1953 examination of maps of the country's land use, animal life, mineral resources, industry, power facilities and health installations, among other indicators.

"The data shown on special-subject maps can be of considerable assistance in working on and analyzing problems dealing with Canada," says the study, originally classified secret.

"Maps are important to a clear understanding of the location, distribution, and relationship of the resources and factors that combine to make Canada the economically important country that it is."

Seen together, the analyses indicate the CIA was taking a long-term view of Canada -- possibly eyeing the country's assets as an advantage in the event of war with the Soviet Union, said Steve Hewitt of the department of American and Canadian studies at the University of Birmingham in England.

"I guess what surprises me, not that the U.S. has interest in Canada, it's more the range of areas that they're looking at and how strategic they are," said Hewitt, who also attended the April conference on the CIA at the University of Nottingham.

Memos show the U.S. government tapped the CIA's cartographic expertise to provide evidence in a 1983 maritime boundary dispute with Canada heard by the International Court of Justice.

In the early 1950s, the CIA relied on the U.S. Office of Naval Intelligence for information on the B.C. shipping industry.

Sometimes the CIA's interest in Canadian trade was sparked by concerns about dealings with the Soviets or nations under Moscow's influence.

The intelligence agency flagged a $45-million Soviet purchase of Canadian wheat and closely charted Canada's exports to Cuba in the early 1960s when U.S. tensions with Fidel Castro boiled over into a heart-stopping missile crisis.

A secret 1951 report expressed concerns about a 560-ton shipment of Canadian aluminum possibly bound for Czechoslovakia via Italy.

The agency also had strong suspicions in the 1950s about a Toronto firm that figured in a number of dubious shipments to East Bloc countries. While surmising the company might have been an innocent dupe, the CIA concluded that "any transactions in which this firm takes part should be viewed with suspicion by pertinent export-control authorities."

Hewitt wonders whether RCMP security agents passed the information to the CIA, or if U.S. agents gathered intelligence about the Toronto firm on their own. "I think it would have been bad form for them not to have at least notified the RCMP what they were up to."

Any still-secret, highly classified CIA material dealing with Canada would shed light on the inner workings of the intelligence-sharing relationship between the two countries, Wark said.

"It would be fascinating to see, but we'll probably never see it."