TORONTO -- Fourteen fish farms in British Columbia are infected with a virus that can potentially spread from farmed salmon to struggling wild salmon populations, according to a new report released Wednesday.

The report, released by Tofino-based conservation group Clayoquot Action, says that piscine orthoreovirus (PRV) was found at nearly 100 per cent of the open-net salmon farms tested by the organization in Clayoquot Sound, a waterway on the west coast of Vancouver Island.

However, a spokesperson for the B.C. Salmon Farmers Association denied the report’s findings in an interview with CTVNews.ca, saying that the virus is found naturally in B.C. waters.

Clayoquot Action's report said an infected salmon farm can “release as many as 65 billion viral particles an hour” that can then spread to wild salmon populations through tidal currents.

There are questions about how deadly the virus is for Pacific salmon, but a 2018 study led by a federal scientist linked the virus to a deadly form of anemia in at least one species of wild B.C. salmon.

In Atlantic salmon, PRV can cause fatal heart and skeletal muscle inflammation.

Salmon are an important source of food for bears, whales and other predators, but their populations are struggling. Last year, the Department of Fisheries and Oceans (DFO) forecast 4.7 million salmon would return to the Fraser River. Just 600,000 – or 13 per cent of the original forecast – showed up.

“Salmon are what’s known as a keystone species … over 100 different species depend on wild salmon,” Bonny Glambeck, campaigns director for Clayoquot Action, told CTVNews.ca in an interview. “The ecosystem utterly depends on these fish.”

Last year, volunteers and staff members from the organization visited 15 farms run by two companies: Cermaq and Creative Salmon. They stood on boats and used long nets on poles to scoop up bits of fish fat, feces, flesh and scales. Those samples were then sent to the Atlantic Veterinary College and tested by Dr. Fred Kibenge, a noted expert in salmon-related viruses. 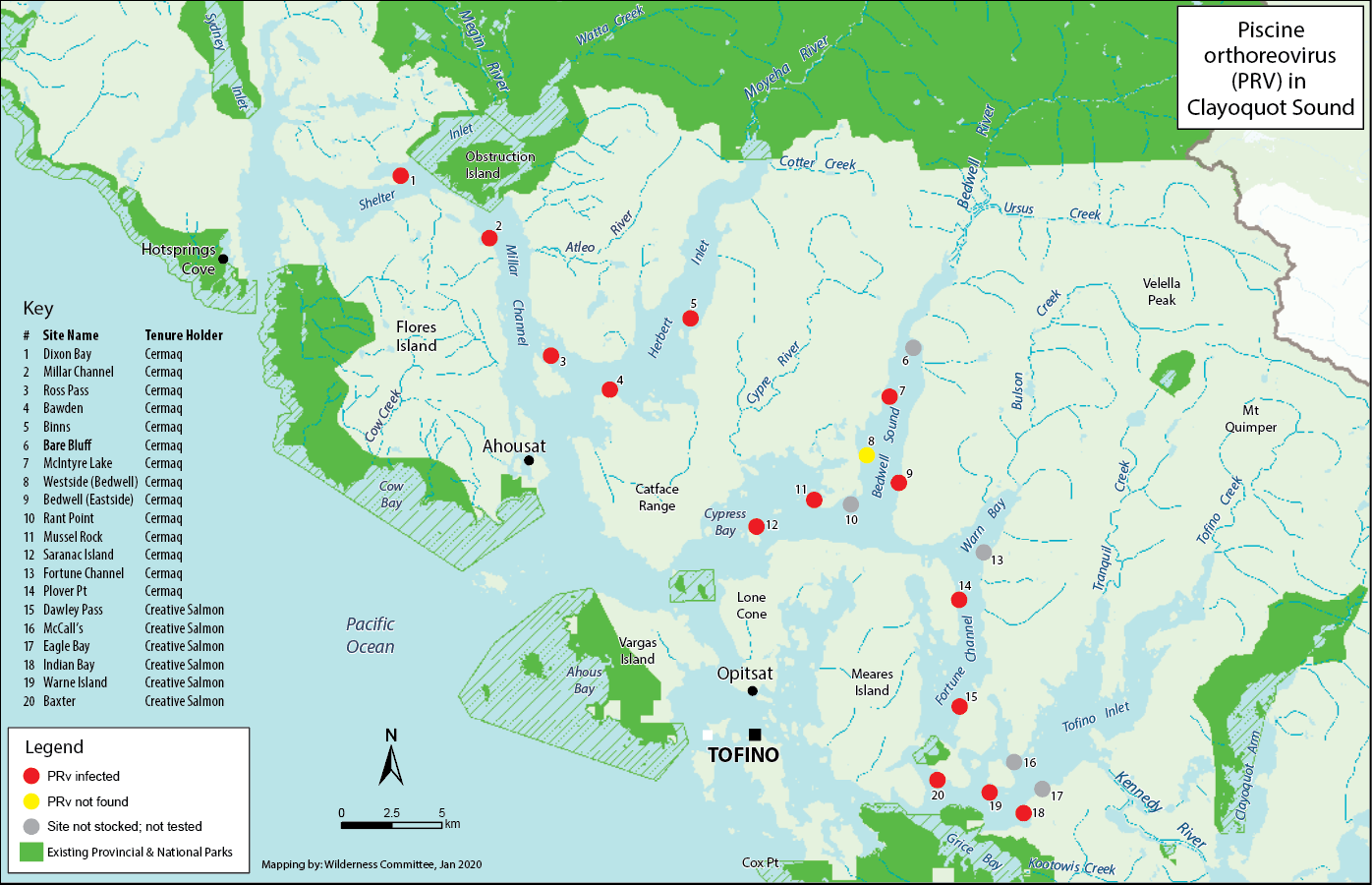 CTVNews.ca reached out to both companies referenced in Clayoquot Action’s report. At time of writing, Creative Salmon had yet to respond to request for comment and Cermaq said in an emailed statement to CTVNews.ca that the B.C. Salmon Farmers Association would be responding on their behalf.

In December, the DFO said that scientists are currently conducting several projects to determine PRV’s connection to fish disease and its impact on fish. The findings will be reported when available, the department told CTV News at the time.

PRV in salmon is “strongly associated with red blood cells rupturing …overwhelming their vital organs and can cause organ failure and death,” Glambeck said.

The crux of the issue, she said, is salmon farm companies allowing PRV-infected juvenile fish to be moved from enclosed farms into open-net salmon pens in B.C. waterways.

“Essentially it is in violation of our Fisheries Act to be putting these infected fish in the ocean because of the risks that it poses to wild salmon,” Glambeck said.

“We’re on the brink of losing our wild salmon populations, not only in our region but in all of British Columbia.”

Shawn Hall, a spokesman for the B.C. Salmon Farmers Association, categorically denied the report’s findings in a telephone interview with CTVNews.ca Wednesday.

Hall said that the virus discussed in Clayoquot Action’s report is a strain of PRV known as PRV-1A, colloquially referred to as the “B.C. strain” of the virus – different from the PRV-1B strain that he said is found solely in Norway and is known to cause health issues in fish.

“What the salmon reports aren’t telling you is that this PRV [1A] is naturally in our waters and is different than the 1B strain that is found in Norway,” Hall said, citing a 2018 report by the B.C. Centre for Aquatic Health Sciences authored by researchers at the University of British Columbia. “1A doesn’t appear to make fish sick. We’ve also known that it’s been here for some years now.”

“We’re not importing anything, we use local brood stock, and local land-based hatcheries,” Hall said, denying that B.C. fish farms could have potentially imported PRV-1B from Norway.

Glambeck said there are no human health concerns linked to consumption of PRV-infected salmon – something echoed by the B.C. bureau of the DFO.

Hall also denied that juvenile fish are being released from hatcheries into open-net pens while carrying PRV, saying the fish “pick it up from the ocean, just like wild fish do.”

“We are committed to responsible salmon farming and to provide this important food in an environmentally and socially sound manner, and by doing that helping to protect wild salmon from over-fishing by providing a sustainably raised alternative,” Hall said.