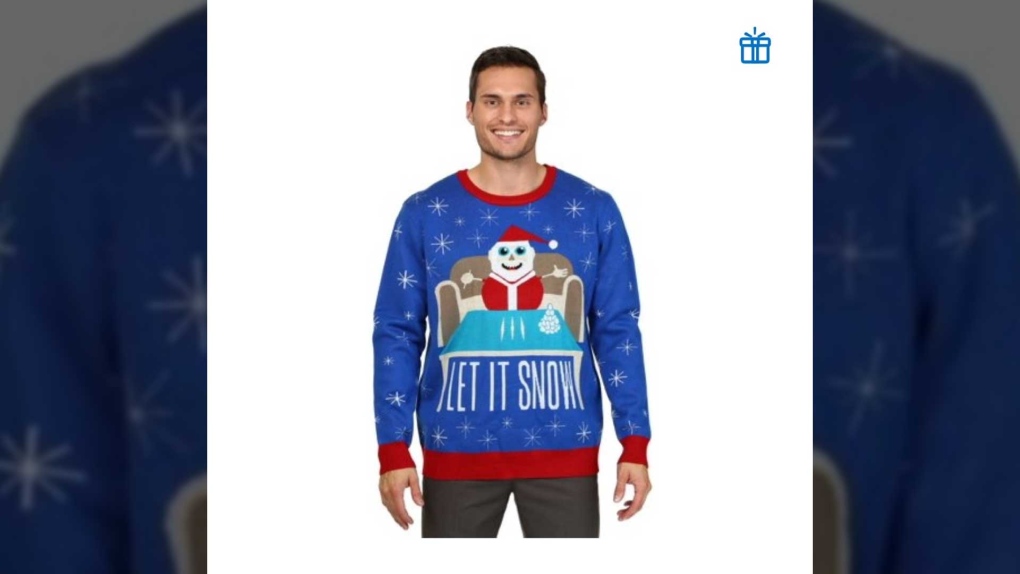 TORONTO -- An ugly Christmas sweater that depicts a snowman Santa sitting in front of what appears to be three lines of cocaine was among several “naughty” holiday sweaters pulled off Walmart.ca over the weekend after social media users noticed the items for sale on the website.

“We all know how snow works. It’s white, powdery and the best snow comes straight from South America,” the original product description said, according to a screengrab posted by a Twitter user.

Yall. Look at this description for this Christmas sweater from Walmart pic.twitter.com/lBdmKQ1JoZ

“That’s why Santa really likes to take [sic] savor the moment when he gets his hands on some quality, grade A, Colombian snow. He packs it in perfect lines …. and then takes a big whiff to smell the high quality aroma.”

The retailer apologized for the items and took them off line after getting an inquiry from Global News, which first reported on the incident.

Other cheeky Christmas sweaters included one that showed a bottomless Santa facing a fireplace with the caption, “Chestnuts roasting on an open fire”.

“These sweaters, sold by a third-party seller on Walmart.ca, do not represent Walmart’s values and have no place on our website. We have removed these products from our marketplace. We apologize for any unintended offence this may have caused,” a spokesman wrote in an email, reiterating its earlier apology over the weekend.

The items were made available through the Walmart Marketplace, which allows third-party vendors to sell their items on the website, giving them access to the millions of customers who shop online at Walmart.

The company did not answer questions on what kind of approval or vetting process Walmart uses for third-party sellers and their products, and whether the company would make any changes to prevent similar incidents in the future.

This is the latest in a number of incidents involving products sold by third-party sellers on Walmart’s websites that have attracted attention and controversy.

Earlier this year, social media users criticized the retailer for some of the pro-gun shirts that were available on Walmart.com including one that showed two check boxes, one for “GUN OWNER”, which had a red checkmark, and one for “VICTIM”, which was left blank. Other shirts, such as one that says, “How do I feel about GUN CONTROL? (Break into my house and find out.)” can still be found on the website.

Last year, the company came under fire for selling anti-trump clothing, including a onesie with “IMPEACH 45” across the front. And two years ago, a t-shirt that said “Rope. Tree. Journalist. SOME ASSEMBLY REQUIRED” was pulled off its website. That same year, Walmart issued an apology and pulled the product after a third-party seller used an offensive slur to describe an item’s colour.

Many of these clothing items that do not meet Walmart’s more “family-friendly” image can still be found on Amazon.com, including some of the "ugly" Christmas sweaters.

Amazon.com stirred outrage last week as well, however, after a number of Christmas ornaments showing images of the Auschwitz concentration camps were listed for sale by third-party sellers. Amazon removed those items after they were flagged by the Auschwitz Memorial.