Derek Parker is about to host what might be the world’s coolest Super Bowl party – inside the fully stocked backyard “man cave” that he built out of ice.

“We live in a climate where we stay in the house four months per year, so something like this makes it a little different,” Parker told CTV Montreal.

The construction of the ice structure in Parker’s Brossard, Que., back yard took more than 100 hours. Parker says he worked on it pretty much every day after work from Dec. 14 to Jan. 8.

“Weekends, I would get up at eight o’clock in the morning, come out, go back in the house at ten at night,” he said. “It's something you have to be dedicated to.”

Parker filled plastic buckets with water to make its 568 ice blocks, waited for them to freeze and used slush as grout to hold them in place.

Parker said he was inspired after seeing someone on television build an igloo.

While the kids are certainly happy, the castle has become a quintessentially Canadian man cave. In addition to the television, there are LED lights built into the walls and lots of Montreal Canadiens paraphernalia.

All drinks, Parker said, are served on the rocks. “No warm beer here,” he joked. 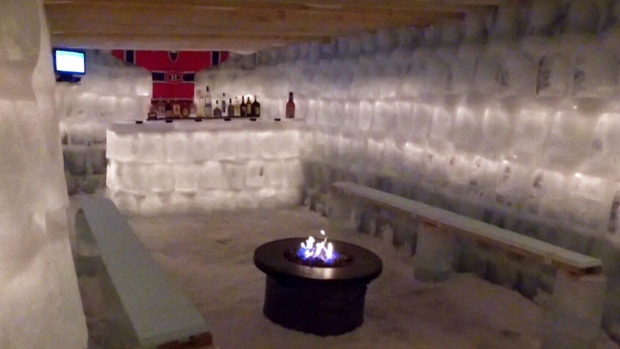 Parker’s been inviting friends over to watch Habs games, and on Sunday he is hosting a Super Bowl party. If guests are worried about getting cold, the palace is even equipped with a fire pit.

Friends and neighbours say that they’re more than a little impressed.

“It was crazy the time that he spends out here,” young neighbour Aiden Cossette told CTV Montreal. “How it all turned out, it's awesome.” 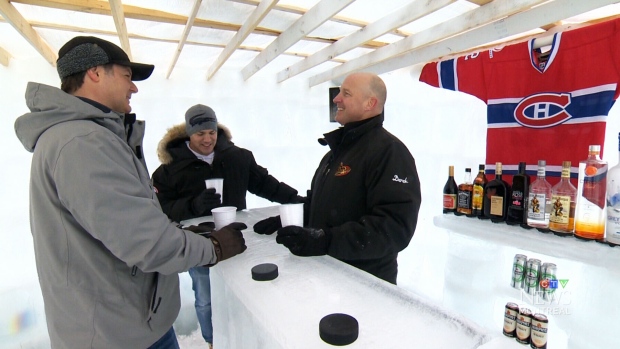 In the spring, Parker hopes all the ice will melt right into his swimming pool.

And he’s already thinking of ways to enhance his castle for next winter.

“I always like to take it to the next step,” he said. “If we’re having fun and it’s bringing people together, we’ll do it again.”

With a report from CTV Montreal’s Kelly Greig