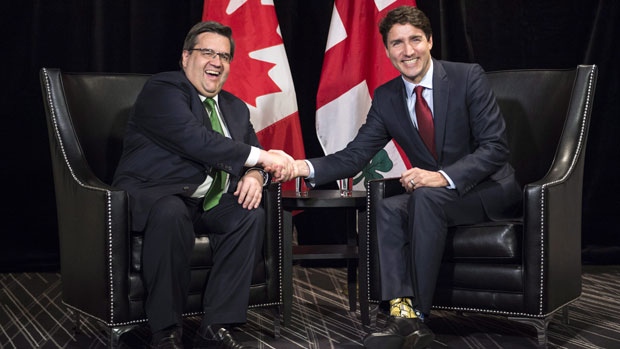 Prime Minister Justin Trudeau shakes hands with Montreal Mayor Denis Coderre prior to their meeting, Thursday, May 4, 2017 in Montreal. THE CANADIAN PRESS/Paul Chiasson

OTTAWA -- Prime Minister Justin Trudeau will announce a $1.28-billion commitment Thursday toward a major Montreal rail project that will connect the city to its suburbs and to its international airport, sources say.

Trudeau will make the transit announcement at the city's central station where he will be joined by Quebec Premier Philippe Couillard, Montreal Mayor Denis Coderre and Michael Sabia, the head of the province's public pension fund manager.

A federal source told The Canadian Press that while the dollar amount behind the commitment will be firm, there are a couple of possibilities when it comes to how it will ultimately roll out.

The $35-billion infrastructure bank is designed to use public funds as a way to leverage billions more from private investors to pay for new, large-scale projects, such as rail lines, bridges and transit systems. Ottawa hopes the bank's funds will lure three or four times that amount from the private sector.

The government source, who was not authorized to speak publicly on the matter, said in many ways the $5.5-billion Montreal transit proposal fits prerequisites the bank will be looking for when it evaluates projects.

But the decision whether to approve any project will be left up to officials at the infrastructure bank officials, the source added.

However, the Liberal government has said that in order to protect the interests of Canadians, the Trudeau cabinet will have the power to refuse projects that receive a green light from the bank.

In January 2015, the Quebec government and the province's public pension fund manager announced the agreement to build the electric light-rail network.

The Quebec government had been calling on the federal government to provide at least $1 billion toward the Montreal rail project, which also received financing from the provincial pension fund.

As a way to lift the economy, the federal government has committed to invest about $186 billion into infrastructure across Canada over the next 11 years.

However, the bank has faced considerable criticism related to concerns over how it would be governed and the level of risk it could put on the backs of taxpayers.

Some opponents have also warned the Crown corporation will likely force Canadians to pay twice for their infrastructure -- first through the public treasury and then through user fees.

The Liberals argue the major projects that will be funded through the bank would otherwise be too expensive for governments and too risky for private companies to handle alone.

"We know that looking at innovative ways to build the kind of infrastructure that Canadians need is really important to the present and the future of our country," Trudeau said Tuesday.

Finance Minister Bill Morneau has said the bank would ensure the government would take on a smaller role while more of the risk would be shifted to private investors, who would absorb the majority of any cost overruns.

Morneau has also argued the bank would create less risk for taxpayers than if the feds shouldered the financial burden for projects on its own.