Emergency crews have had to back off and let a major fire on a CN tanker train derailment 80 km west of Edmonton burn itself out.

Residents of nearby Gainford will have to wait until at least Sunday to return home from an emergency evacuation of their town. They could have to wait as long as 72 hours for the blaze to burn out.

Jim Phelan, Parkland County fire chief, says no further explosions are expected from the 13 cars carrying oil and liquefied petroleum gas on a freight train operated by Canadian National Railway, but the evacuation order for about 100 people must stay in place.

“Until it is safe to approach the immediate area, the hot zone as we call it, we’ll be keeping all emergency personnel and civilians away,” Phelan said.

He said two of the cars remained on fire late Saturday.

Two investigators from the Transportation Safety Board of Canada are on the scene but haven’t been able to get close to the train to determine what happened.

They will be looking at the train’s maintenance and history, checking the tracks and talking to the CN crew.

Thirteen of the 130 cars on the train came off the tracks around 1 a.m. Saturday -- nine of which were carrying liquefied petroleum gas and four were carrying crude oil.

Residents of Parkland County reported seeing a fireball shoot across the sky after one of the cars carrying liquefied petroleum gas exploded.

The derailment prompted the evacuation of the nearby hamlet of Gainford.

Gainford resident Jeanette Hall said she awoke to what sounded like “an airplane landing on Highway 16.”

“I heard the cars tipping over and there was a huge crash that shook the house -- then the fireball,” Hall told CTV News Channel.

She said the derailment happened about 100 metres outside her home.

The heat that followed the explosion was “unbearable.”

“My entire front yard was on fire,” Hall said. “I can’t believe we walked away from that.”

A local state of emergency was declared and a one-mile perimeter from the epicentre of the derailment has been evacuated.

No injuries have been reported, but officials say residents won’t be able to return to their homes for at least 24 hours.

“We saw the incident in Quebec, Lac-Megantic, and the significant loss of life and we’re very fortunate that this incident wasn’t of that magnitude,” he said.

Officials report 49 individuals from Gainford, a community of roughly 100, have registered at an evacuation reception centre.

A portion of Highway 16 has closed due to the fire. Traffic is expected to be rerouted for the next 48 hours.

“There’s a major risk for the area, so we are rerouting traffic, keeping people far, far from that area,” Parkland County spokesperson Carson Mills said Saturday.

Mills noted that it was in Parkland County that more than 40 cars of a CN Rail train derailed in 2005, spilling 800,000 litres of bunker oil and wood preservative into Wabamun Lake. 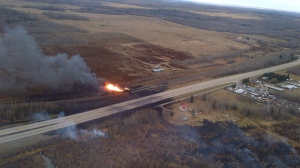 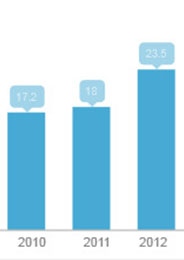 On the rise: Fuel transportation by rail in Canada