'The loudest crash I've ever heard': Impaired driver flips vehicle through the air into home

A 26-year-old man was charged with impaired driving after he flipped his vehicle through the air into a New Hamburg, Ont. home, sending smoke pouring inside.

Police said the driver lost control, struck a fire hydrant and a rock in front of the home around 11 p.m. on Saturday. The vehicle is said to have then launched into the air, before sliding on its roof into the front porch of the house.

“It was the loudest crash I’ve ever heard,” homeowner Heather Wilson told CTV Kitchener. “We opened the door and the smoke was billowing into the house.”

The three people inside were not injured.

Wilson said her neighbours broke the window of the vehicle to free the driver. Police said he was treated for minor injuries.

The driver is set to appear in court in June. 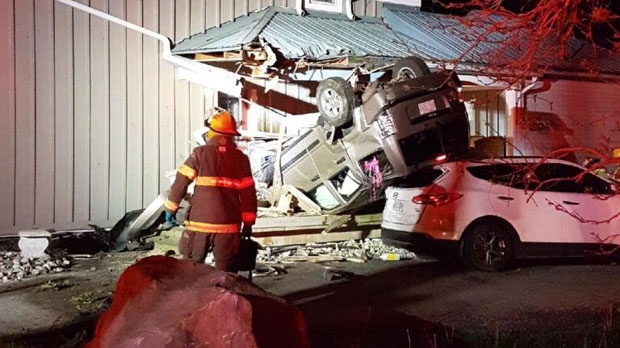