Toronto police are hopeful they have found all the victims allegedly murdered by Bruce McArthur now that an eighth set of human remains has been recovered and identified in the case, a senior detective said Friday.

The recent excavation around a central Toronto home where the 66-year-old McArthur worked as a landscaper yielded the final set of remains investigators had yet to locate in their seven-month-long probe, said Acting Insp. Hank Idsinga.

The remains of seven men were recovered from planters at the same property earlier in the year, but police had struggled to find any connected to Majeed Kayhan, who disappeared in 2012. Idsinga said Friday that Kayhan's dismembered remains were found scattered in several locations in a ravine behind the home.

The current evidence in the case suggests there aren't any more alleged victims, Idsinga said, although investigators are still sifting through tips from Canada and abroad, and analyzing cold cases and missing persons' reports -- including a "rash of murders" from the 1970s and 80s.

"As far as we know the first murder took place in 2010," Idsinga told reporters. "There's eight victims that we've identified, and I hope that it remains at just eight victims."

McArthur was arrested in January in connection with the disappearances of men with ties to Toronto's gay community.

Charges against him have mounted in the ensuing months, and he now stands charged with eight counts of first-degree murder in the deaths of Kayhan, Selim Esen, Skandaraj Navaratnam, Andrew Kinsman, Dean Lisowick, Soroush Mahmudi, Abdulbasir Faizi and Kirushna Kanagaratnam.

The men all went missing between 2010 and 2017, most often from Toronto's gay village.

Police have searched about 100 properties linked to McArthur, but have only found human remains in and around the one central Toronto home. No other searches are anticipated, Idsinga said.

The discovery of the eighth set of remains marks an important moment for the emotional well-being of those impacted by McArthur's alleged crimes, Idsinga said.

"It's important for the families for closure, for the victims themselves, and for the community ... as a whole," he said. "It's been a terrible set of circumstances, and hopefully some healing can go on and some closure can be brought to the families."

Idsinga said he has spoken to Kayhan's family since the identification of the man's remains and said they are going through a "very difficult" time.

"Of course they were eternally hopeful that what has happened ultimately wouldn't happen," he said. "But they are very grateful for the closure."

Finding Kayhan's remains is a positive step, said the executive director of the Alliance for South Asian AIDS Prevention.

"It's actually kind of nice to know that they found Majeed and his family can rest and the community can rest," said Haran Vijayanathan, whose organization has called for a review of the way police handled reports of missing gay men, several of them from South Asian backgrounds, in the years leading up to McArthur's arrest.

"Hopefully these reviews and this entire case and experience will inform how we collect information, how we support individuals, how we work with individuals who are coming in with crises," he said.

McArthur's case is scheduled to return to court on July 23. 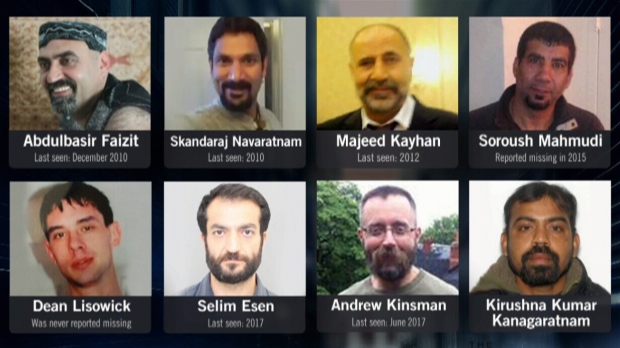