The Queen and Prince Phillip were given a red-carpet greeting by Canada’s outgoing Gov. Gen. David Johnston and his wife Sharon at Canada’s High Commission in London on Wednesday.

The Governor General created a stir in the British media when he momentarily swept aside royal protocol by touching the Queen on her arm as they walked down the stairs of Canada House.

Etiquette suggests that visitors should not touch a member of the royal family unless they’re returning a handshake.

CTV’s Daniele Hamamdjian reported from London that Johnston told reporters that he knew he was breaking royal protocol when he touched the Queen’s arm but that he was concerned she might fall on the stairs. 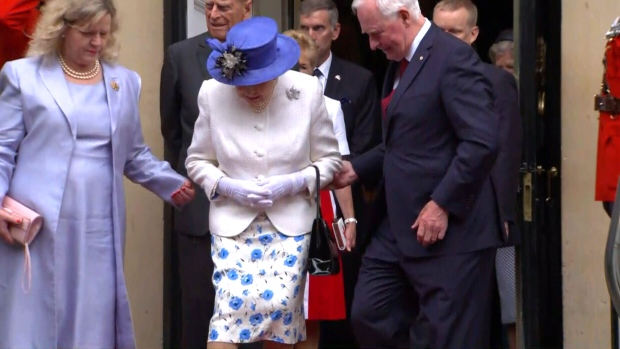 Despite the momentary breach, Johnston and his wife appeared to be in good spirits as they interacted with the royal couple.

The Johnstons were festively dressed for the occasion with the Governor General showing off his red and white socks with maple leaves and his wife clutching a maple leaf purse given to her by former Prime Minister Stephen Harper’s wife Laureen.

.@GGDavidJohnston has been Her Majesty’s representative in Canada for 7 years as Governor General, his term ends this autumn pic.twitter.com/RClCpSVB4G

The Governor General's wife Sharon Johnston all in Canadiana, her purse a gift by Laureen Harper. #canada150 pic.twitter.com/bBuFbGewOb

The royal couple met with prominent Canadians and toured Canada House, where they saw hockey memorabilia, a display from the National Maritime Museum and items from The Royal Archives.

The Queen and Prince Phillip also signed their names in the official guest book.

The Queen and The Duke were met at Canada House by the Governor General of Canada, His Excellency Mr David Johnston. #Canada150 pic.twitter.com/4ArTG6EO2R

Objects have been taken from The Royal Archives and include an original program from the opening of Canada House in 1925 by King George V. pic.twitter.com/aZTnlKJ5Pm

Johnston tweeted that he was pleased to present the Queen with the Sapphire Jubilee Snowflake Brooch in honour of her 65 years on the throne.

I was pleased to present the Sapphire Jubilee Snowflake Brooch to Her Majesty The Queen to mark 65 years of her reign. pic.twitter.com/Mbd6JJ9AYy

Before the royal couple departed, the Queen unveiled a new Jubilee Walkway panel in front of Canada House.

The Queen held an audience with Johnston and his wife on Tuesday, to thank him for his years of service. Johnston officially relinquished his appointment as Governor General and is to be succeeded by Julie Payette, a former astronaut.