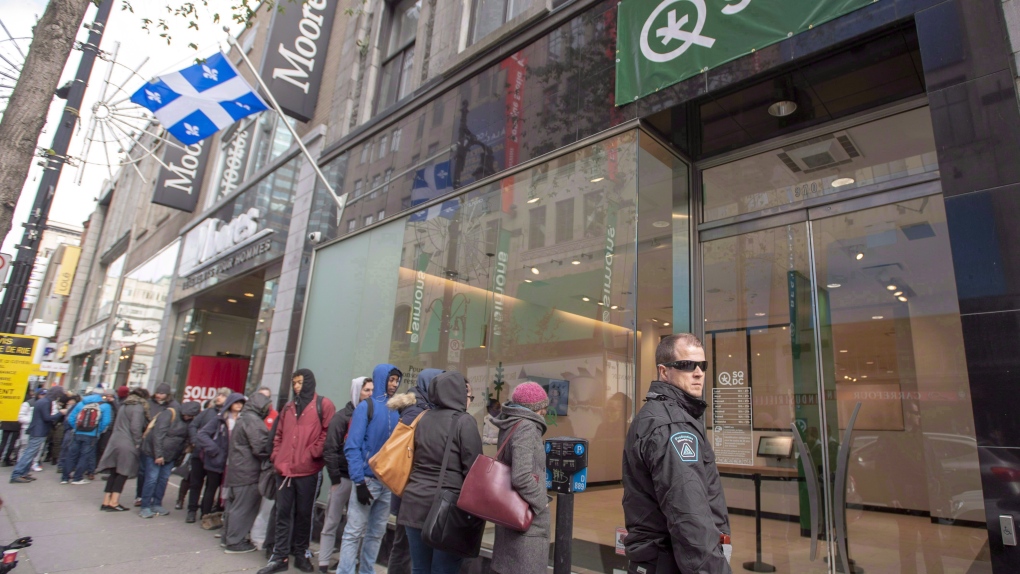 Customers lineup at a government cannabis store in Montreal on October 18, 2018. Quebec's cannabis agency generated about $40 million of sales in its first three months of operation, but supply shortages are forcing the public retailer to reduce its expansion plans. (THE CANADIAN PRESS/Ryan Remiorz)

MONTREAL -- Quebec's cannabis agency generated about $40 million of sales in its first three months of operation, but supply shortages are forcing the public retailer to reduce its expansion plans.

The province expects to have 40 points of sale in March 2020, 20 per cent less than the 50 outlined in the original expansion plan.

Retail store shelves became empty soon after recreational cannabis was legalized on Oct. 17, a situation observed across the country.

The subsidiary of the Societe des alcools du Quebec cut back its hours of operation so that its 12 stores were open four days a week.

Jean-Francois Bergeron, president of the Societe quebecoise du cannabis (SQDC), says it put the network's expansion a bit on ice, which explains the network size being reduced to 40 stores.

He also said more time is needed to adapt to the recommendations of the provincial government, including a prohibition on stores openings near community colleges and universities.

Quebec Premier Francois Legault says the profitability of the cannabis operations is of little concern to him as he prefers to focus on terms governing the sale and consumption of the substance.

Legault told reporters at the World Economic Forum in Davos that his government has been busy raising the legal age to purchase marijuana to 21 years. The legislation tabled last month would also prohibit consumption in all public places, including parks and playgrounds.

While supply shortages continue, Bergeron said there should be an improvement by late spring when new volumes become available.

However, he said it will take patience before the situation is fully resolved, even as it plans three new store openings by summer.

Bergeron is reviewing plans but for now intends to expand the network even if that means stores must continue to close their doors a few days during the week.

"I think it's better for customers to have a larger network at four days a week than a seven-day network," Bergeron told The Canadian Press. "When branches are open, it's easier to gradually add a day of operation."

Bergeron said he expects the cannabis retailer will generate a profit at the end of its first full fiscal year of operations on March 31, 2020 and will report its performance after six months.

He estimates Quebec's 5.7 tonnes of sales have accounted for 35 per cent of the Canadian legal market. The average price per gram was $7.27 including taxes, compared with the Canadian average of $9.70.

The black market remains the lowest at $5.50 per gram, Bergeron added.

Statistics Canada said $54 million worth of cannabis was sold across the country in November, according to preliminary numbers released Wednesday. That's up more than 25 per cent from the $43.1 million recorded in October, which including about two weeks of legal recreational pot sales.

"With supply being below demand, it creates a huge upward pressure on prices," Bergeron said. "Producers know that the market is not balanced. This may create upward pressure in the short term."