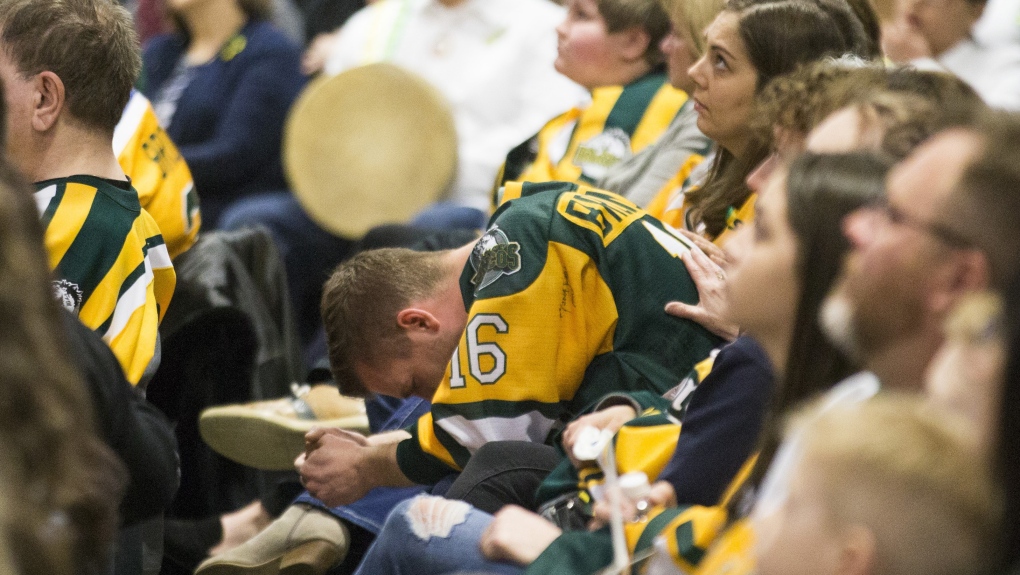 In this file photo, family members and friends look on during the Humboldt Broncos memorial service at Elgar Petersen Arena in Humboldt, Saskatchewan on Saturday, April, 6, 2019. THE CANADIAN PRESS/POOL-Liam Richards

EDMONTON -- Alberta's transportation minister says there will be a two-year probationary period for thousands of bus and truck drivers who passed their exams before new training rules took effect.

Ric McIver announced the move on Twitter following what he called a respectful and constructive conversation with families affected by the Humboldt Broncos bus crash.

Sixteen people were killed and 13 were injured when an inexperienced Calgary truck driver ran a stop sign and barrelled into the path of the junior hockey team's bus in Saskatchewan in April 2018.

Saskatchewan, Alberta and Manitoba implemented mandatory training for truck and bus drivers after the collision.

Families of those on the bus have expressed anger that Alberta's United Conservative government is reviewing the rules for school bus drivers and farmers and has granted exemptions for some truckers.

McIver has said about 6,800 Class 1 and 2 drivers passed their exams after the Mandatory Entry Level Training rules were announced, but before they came into effect.

"Following our conversation with families, we've decided that transition drivers will be placed on 2 yrs probation, in addition to already required clean driving record," McIver wrote in a tweet on Friday.

"If they receive an infraction of any kind within their probation, they'll be required to retest under MELT."