Plaques across Ottawa to honour Fathers of Confederation for Canada's 150th 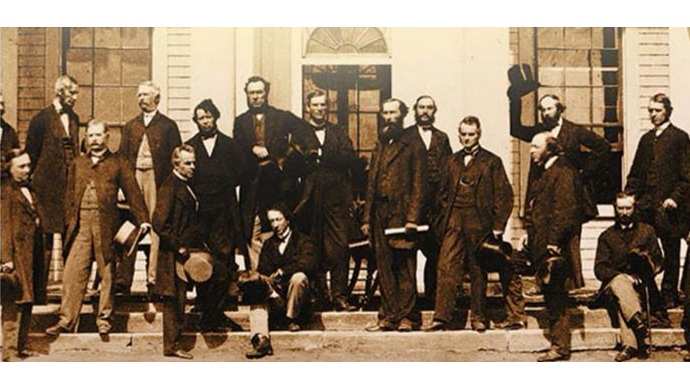 The Fathers of Confederation are seen on the steps of Government House in Charlottetown in 1864.

OTTAWA -- The federal department overseeing Canada 150 celebrations is embarking on a capital-wide project to place commemorative plaques at locations where 15 Fathers of Confederation made a home during their time in Parliament.

In all, there are 32 spots that the department identified as former residences to politically historical figures, including Sir John A. Macdonald, Sir Charles Tupper, Thomas D'Arcy McGee, and Sir Oliver Mowat.

That left 20 former residences for the department to identify and prepare for plaquing.

After Confederation, 11 of the key figures who brought the country together moved to Ottawa after joining the House of Commons, but four more also lived in Ottawa after the country was born.

Many lived in hotels or rooming houses that were affordable and where the food was decent. Many simply paid for a room in whatever housing was available.

In time, some bought homes in what were the upscale neighbourhoods in post-Confederation Ottawa.

The intervening decades have meant that all but six of those homes are still standing as development and construction changed the landscape of the capital. Where once stood homes now stands office towers, government buildings, monuments, new homes to replace older ones that burned to the ground, and, in some cases, parking lots.

For example, one spot where Sir Charles Tupper lived is now the headquarters for the Canadian Red Cross, while the other location is home to another Canadian icon: a Tim Hortons.

In late July, the department announced a plaque would be placed on the former home of Sir George-Etienne Cartier. The plaque will adorn the site of what is now the Hotel Indigo -- one of two addresses where Cartier lived. The other location is around the Confederation Building where MPs have offices.

On July 31, the date the Cartier plaque was announced, then-heritage minister Shelly Glover had approved a plan to place plaques at 19 more sites. The recommendation Glover signed off on lists the cost of the first plaque between $19,000 and $21,500. Every additional plaque would cost between $7,000 and $9,500.

The details are in a briefing note to Glover obtained by The Canadian Press under the Access to Information Act.

Patrice Dutil, a professor in the department of politics and public administration at Ryerson University in Toronto, said heritage plaques give a sense of citizenship and community for anyone who stops to read them.

"I think it helps tourism, I think it instructs citizenship, I think it reminds Canadians that they do have a past and it's not an American past, it's a Canadian past and we don't do enough of it," said Dutil, who openly admits to stopping at and reading any plaque he finds.

Plaques are a relatively cheap way to give visitors to the capital exposure to the basic outline of Canadian history and the most well-known historical figures, said Paul Litt, a history professor from Carleton University. They also give anyone reading them a way to connect with an otherwise distant historical figure or event, he added.

A spokesman for Canadian Heritage wouldn't say when plaques would be in place. Simon Rivet said marking the homes was an "opportunity for Canadians to learn more about their history."

The briefing note to Glover shows the department could have gone in a different direction. Officials raised the idea of an app-based guided tour that would identify the locations of homes and have "rich interpretive content." This could be done relatively easily, the department said, by adding another tour strand to an existing capital tours app and cost about $5,000.

It's not clear why department officials recommended against the app.