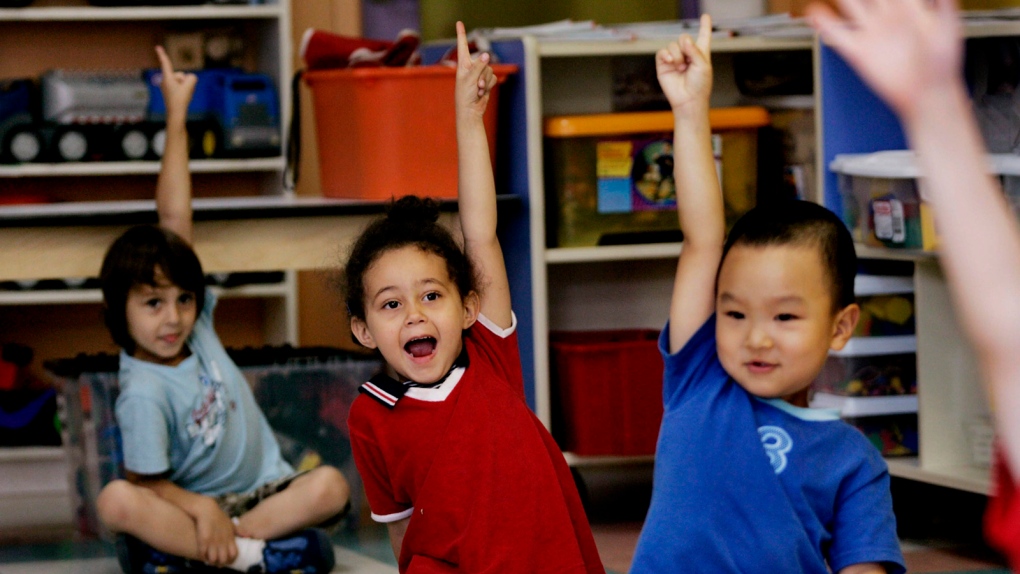 Children put up their hands for ice cream at a daycare centre in Montreal on Friday, August 18, 2006. (Ian Barrett / THE CANADIAN PRESS)

A group of Canadian women has started a petition demanding to know when the federal Liberals are planning to follow through on their election campaign promise to increase parental leave in Canada from 12 months to 18 months.

The petition says many working parents who are struggling to find daycare voted for the Liberals hoping to see parental leave increased. They say that, given the fact some licensed daycares won’t accept toddlers until they are 18 months old, extending parental leave would allow them to care for their children a little longer.

Alisa Fulshtinsky, the founder of the Toronto Mommies online group, says one of its members who has been unable to secure a daycare spot is now facing the prospect of having to resign her position at work.

That member asked her local Liberal MP for a timeline for the parental leave extension and says she was told it wasn’t a priority at the moment. Fulshtinsky says she wrote the petition to let the federal government know the issue should be a priority.

“Our voice has to be heard. This is a really serious problem,” she told CTVNews.ca by phone.

Fulshtinsky said,as prime ministers tackle the business of governing, they tend to push such family-centric issues to the backburner.

“I wanted to make sure that, right now, while he’s still in the honeymoon period, he and our other representatives know we’re going to hold him to the promise,” she said.

In the first three days since the petition’s launch, it has already earned more than 33,000 signatures.

“I honestly didn’t expect it to catch fire so fast,” Fulshtinsky said.

Kathleen Lahey, a tax law professor and the co-director of Feminist Legal Studies at Queen’s University says it’s understandable that young parents are looking for solutions, given the high costs and long waiting lists for licensed day care in most Canadian communities.

“Child care is unbelievably expensive in Canada,” she told CTVNews.ca.

But she’s also not sure that extending parental leave is the best approach.

“Is this extended 18-month period that’s been proposed a real solution to the problem of inaccessible child care? I would say it will only make the problem worse,” Lahey said.

The real issue, she says, is that Canada has the least affordable child care of any of the richest 34 countries in the OECD.

She doesn’t think that keeping parents on Employment Insurance, earning less than half of what they did when they were working, is a solution. In fact, most working parents would not be able to afford to stay away from work that long without a generous top-up form their employers – a benefit not available to many.

But the bigger concern for her, is that extended leave will end up hurting working mothers, since they typically stay home the longest during parental leave.

“Clear-cut research has demonstrated that, once women specifically go on leave for longer than 14 months after their first child, they are less likely to ever return to full-time work,” she said.

A recent study found that working moms who re-enter the workforce after parental leave face wage losses of three per cent for each year of absence, on average, and that wage gap persists for years, worsening with each leave.

Even in European countries with generous parental leaves of 100 weeks or more, the results are similar: the longer women are away from their careers, the higher the likelihood they will return only on a part-time basis or not at all.

Lahey believe the better solution is the Quebec model of universal, subsidized child care, which ensures that both parents can have “secure, durable long-term work” as well as affordable child care.

She says, while the program has costs, it’s also resulted in more women returning to the workforce full-time and contributing to the province’s GDP.

“Women’s labour force participation rates in Quebec is up, the wage gap has shrunk, and the number of dollars produced by the increased level of women’s employment has produced more revenue for both the Canadian and Quebec governments than the cost of the program itself,” Lahey said.

“This is not ideal,” she says of 18-month parental leave. “But right now, we see it as the best Band-Aid solution.”

Given the response to the petition, Fulshtinsky says it’s clear parents are frustrated with the current child care situation in Canada and it’s one that Ottawa needs to take action on.

“We hope we’re taking a step to get the government to listen to us about this issue of early child care,” she said. “So I guess I hope it’s the beginning of a larger dialogue.”