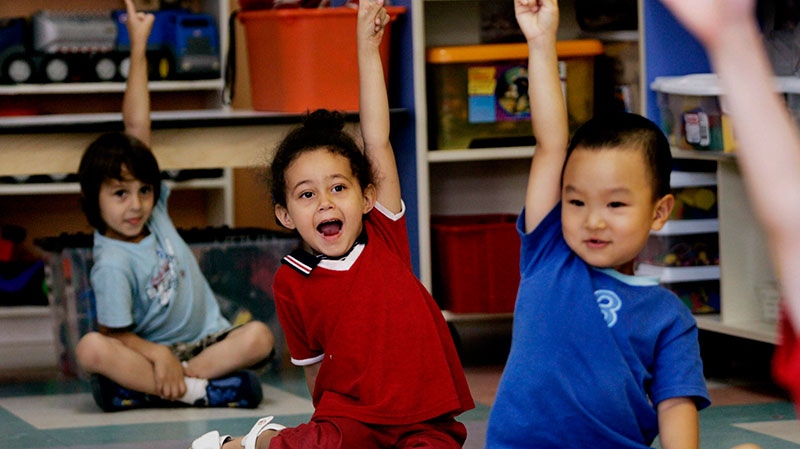 Children put up their hands for ice cream at a daycare centre in Montreal on Friday, Aug. 18, 2006. (Ian Barrett / THE CANADIAN PRESS)

OTTAWA -- A federal promise to spend hundreds of millions of dollars on a national child care system is not a sure thing -- and advocates are wondering happens to the money if the Liberals can't reach agreements on a long-sought day care framework.

The government promised to spend $500 million next year on child care, tying it to ongoing talks with the provinces about a national child care framework that would establish the ground rules for federal involvement in an area of provincial jurisdiction, not unlike health care.

Included in that promise is $100 million for First Nations child care on reserves, an area for which the federal government has direct responsibility.

Federal officials say the money is intended as an incentive to the provinces to entice them into signing onto a child-care framework and to demonstrate that the federal government wants to be a willing partner in the child care system.

But what if there is no agreement by next year -- or only a handful of provinces sign on to a framework?

Employment and Social Development Canada, the federal department overseeing the initiative, would only say that the details of the "disbursement of unused funds are still being determined."

Don Giesbrecht, executive director of the Canadian Child Care Federation, said his group plans to hold the federal government to its promise for spending.

He sees no reason why the provincial, territorial and federal governments wouldn't be able to reach an agreement on child care.

The funding proposal matches what child care advocates quietly asked for behind the scenes in the months before the budget. But that's what they were hoping for in this fiscal year -- not next -- to help lower day care fees, among other issues.

"We sort of thought, to use a phrase, there was some low-hanging fruit there that perhaps could have been addressed immediately, but it wasn't," Giesbrecht said.

"That's OK. We'll build and work towards something that is really robust and progressive in terms of policy."

Social Development Minister Jean-Yves Duclos said in February that he thought the provinces, territories and federal government were on a fast track to a child care framework, building on the work done a decade earlier when the Paul Martin government signed child care agreements with the provinces.

Duclos cautioned at the time that each province had unique needs and programs in place that meant the framework couldn't take a one-size-fits-all approach.

Carolyn Ferns of the Ontario Coalition for Better Child Care said the families in those provinces have much in common. She said there are issues of affordability, accessibility and the quality of child care in every province.

"The provinces are all a lot more the same than they are different," she said.

"This flexibility talk -- while it is important to be flexible, it's also important to have a strong, principle-based framework that builds a program that will last."