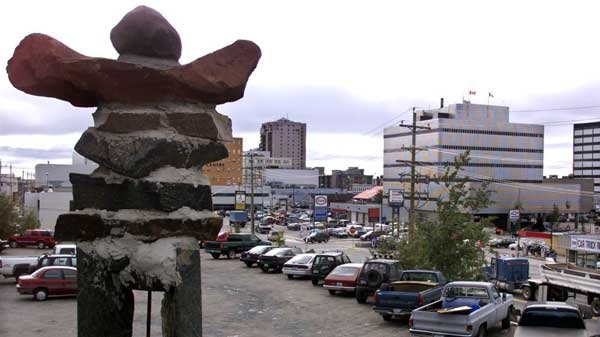 An Inukshuk stands over the skyline of Yellowknife, Tuesday Aug. 21, 2001. (Chuck Stoody / The Canadian Press)

YELLOWKNIFE -- Recently elected politicians in the Northwest Territories have chosen a two-term member of the legislature and former social worker as the new premier.

Caroline Cochrane was picked Thursday after three rounds of balloting by the 19 territorial MLAs, who selected from among four candidates.

"We will make this next four years the most progressive government in the Northwest Territories," she said in her acceptance speech.

Cochrane, who represents a Yellowknife electoral district, becomes the first woman to lead the N.W.T. since Nellie Cournoyea left the job in 1995. Cochrane's new position reflects the makeup of the new assembly, in which nine women were victorious in a territorial election earlier this month.

Under the territory's consensus government, the premier and cabinet are chosen by members of the legislature after each election.

Cabinet was to be selected later Thursday. The premier assigns portfolios after that.

Cochrane, who is Metis, was first elected in 2015 and served in a variety of cabinet posts, most recently in education, culture and employment. She also led the Campaign Schools for Women to promote and support women being elected to all levels of government.

Before entering politics, Cochrane worked for 20 years as a social worker with agencies that supported high-risk families.

Answering questions before the vote, she promised to work with all members of the legislature, both inside and outside cabinet.

"I believe we can do better," she said. "The job of the premier is to bring together the members of the assembly."

She repeated that pledge after the results of the ballot were in.

"For each member that stands here, my commitment is to always have an open door, to put my heart in the people and to hear your words."

Bob McLeod, who was premier for eight years, did not run for re-election.

This report by The Canadian Press was first published Oct. 24, 2019.

Congratulations to the Honourable Caroline Cochrane, on being selected as Premier-elect of the 19th Northwest Territories Legislative Assembly. #nwtpoli pic.twitter.com/vZO50hnZg5