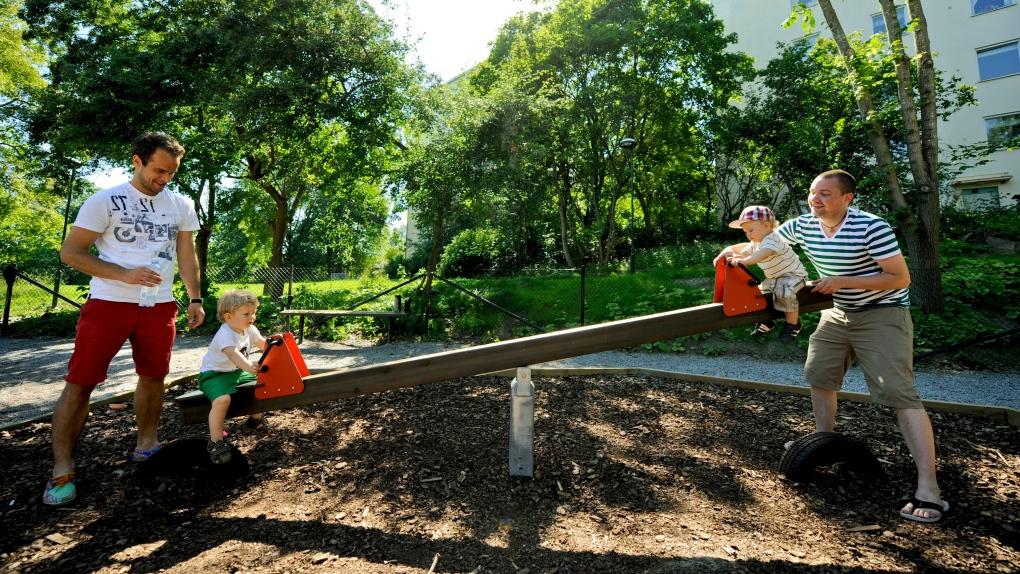 Men and their children play on a seesaw in Stockholm, Sweden in a Wednesday, June 29, 2011 photo. THE CANADIAN PRESS/ AP/Niklas Larsson

OTTAWA -- The federal government says more families than expected are taking advantage of the new ability to extend a year's worth of parental leave benefits over 18 months.

Since the extension was made available in December 2017, more than 32,000 parents have availed themselves of the option -- well above the anticipated 20,000 claims federal officials expected to get each year.

On Sunday, a new use-it-or-lose-it leave for non-birthing parents -- most often targeting fathers -- will come into effect for parents of children born on or after March 17. The leave will also be available to parents of children placed for adoption beginning Sunday.

Parents will get five additional weeks if they opt for the traditional 12-month parental leave, or eight weeks under the new 18-month option, so long as the couple agrees to split the time off to care for a new child.

That option will only be available to parents who qualify for employment insurance benefits, which some experts fear could act as a barrier for parents who don't or can't work enough to meet the minimum requirements for hours worked.

Over the next 12 months, federal officials expect 97,000 families to take advantage of the measures, which are designed to encourage non-birthing parents to take more time to care for a newborn and allow mothers to get return to the workforce sooner.

The vast majority of parental leave claims come from women, who comprise about 85 per cent of the total.

Quebec has had its own program since 2006, and take-up has steadily increased over time. In 2017, about 81 per cent of spouses or partners in Quebec took time off to care for a new child, compared to 12 per cent in the rest of the country.

Quebec's parental leave system provides up to five weeks of paid leave to new fathers, covering up to 70 per cent of their income.

The federal benefit would cover 55 per cent of earnings for those taking 12 months of parental leave, or 33 per cent for those opting for an 18-month leave.