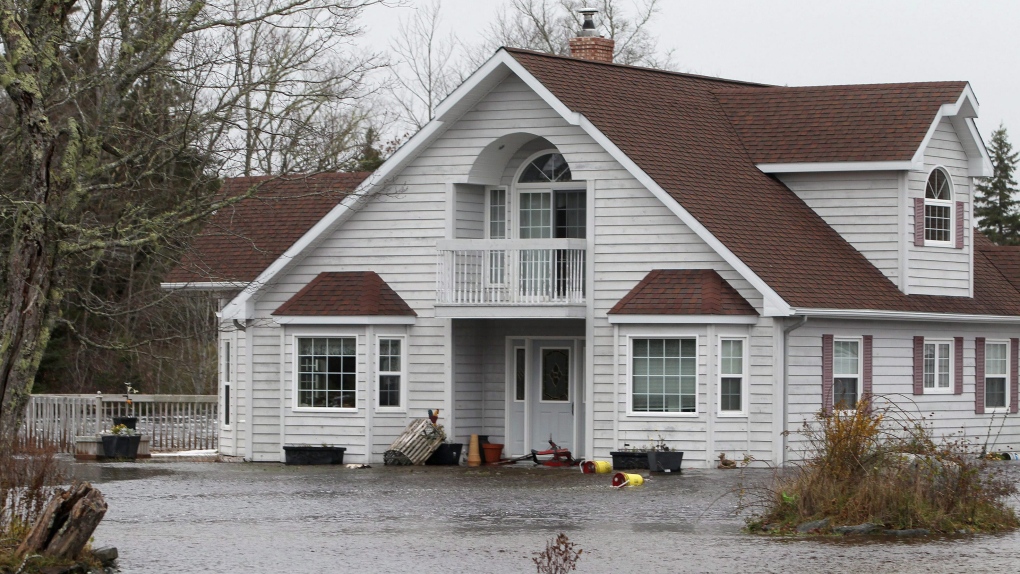 A house along the Clyde River in South Western Nova Scotia on Tuesday, November 9th, 2010, is partly submerged as flood waters continue to surge after several days of heavy rain hit the province. THE CANADIAN PRESS/Mike Dembeck

Canadians aren't keeping up with the need to protect their homes against catastrophic events made more common by climate change, says a coast-to-coast study from the University of Waterloo.

"Homeowners can do a lot themselves to reduce risk of flooding," said Natalia Moudrak, study co-author and researcher at the university's climate adaptation centre.

Climatologists have long warned that extreme weather, including floods, will become more common as temperatures warm.

The Insurance Bureau of Canada reports that insurance payouts from extreme weather have more than doubled every five to 10 years since the 1980s.

The Waterloo study reports that property and casualty payouts averaged about $405 million a year from 1983 to 2008. Since then, payouts have more than quadrupled to $1.8 billion, mostly from flooding.

"All of this data is corrected for inflation and it's corrected for wealth creation," said co-author David Feltmate Thursday. "This is an actual increase in the amount of money being paid out."

At the same time, the study found a large number of Canadians are vulnerable to flooding. It concluded about 1.7 million households representing about 20 per cent of Canada's population are at risk.

Repairs can be expensive. The average cost to homeowners for flood damage in the Greater Toronto Area is estimated at $43,000.

And for some, insurance is out of reach.

"Increasingly," said Feltmate, "people cannot get insurance for their homes because they have experienced one or more floods or they live in an area that's designated high-risk and the premiums that the insurers would have to charge are off the charts."

At the same time, householders aren't doing everything they can to protect themselves and their homes -- even when subsidies are available for measures such as sump pumps.

That's partly because many of the programs are confusing and difficult to apply for, said Feltmate, although he added municipalities are fixing those problems.

The report points out easy and inexpensive ways to make homes more floodproof.

Installing a sump pump with backup power is one of the best moves, it says. Backwater valves can prevent nasty backflows from overloaded sewer systems from surging into basements.

The report recommends walking around a house during a rain to see how and where water is draining, then regrading areas where moisture pools near foundations. And leaves should be prevented from plugging street drains.

"Homeowners need to take a more active role in protecting themselves," Moudrak said.

The report also looks at municipalities. Feltmate said communities are taking steps to adapt to new weather coming with a shifting climate, but the rate of change is outpacing efforts.

"We have an adaptation deficit growing in Canada right now," he said.

Money laid out ahead of time pays off, said Feltmate. The study suggests every dollar spent on preparing for a flood or other weather catastrophe saves between $3 and $12 in cleanup costs.

"It's a lot cheaper not to have the problem," he said.