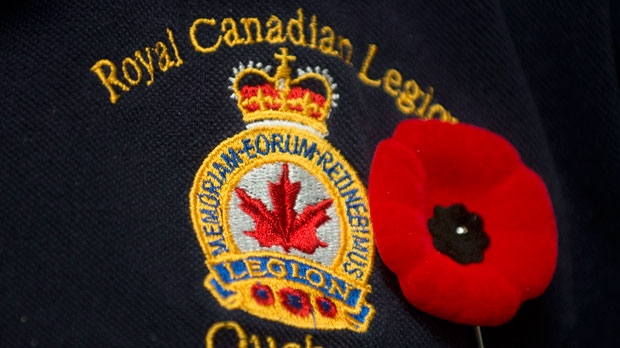 Norman Shelton, 1st vice-president of the Quebec branch of the Royal Canadian Legion wears a poppy on his shirt during an interview in Montreal on Friday, Nov. 2, 2012. (The Canadian Press/Graham Hughes)

Every November, bright red poppies blossom on the left side of coats and shirts of Canadians across the country.

The Royal Canadian Legion’s poppy donation trays are once again making their annual appearance, so Canadians can don the symbol of remembrance this month. Here are four things to know about proper ‘poppy protocol’:

Poppies are an international symbol of remembrance. In Canada, poppies are commonly worn on the left side, or displayed on a wreath, to honour Canadian veterans who lost their lives in service to the country.

2. When should the poppy be worn?

Poppies are traditionally worn during the Remembrance period, between the last Friday in October until the end of the day on Nov. 11. Alternatively, poppies may be worn until the conclusion of a remembrance ceremony on Nov. 11, at which point the poppy may be placed on a cenotaph or wreath as a sign of respect. Poppies can also be worn at commemorative events through the year, such as memorial services commemorating the Battle of the Atlantic and the Battle of Britain for example, or during funeral services for veterans or ordinary members of the Legion.

3. How should I wear my poppy?

The poppy should be worn respectfully on the left breast, near to the heart. It can be fixed on the left lapel of a jacket or directly onto the left side of a shirt or blouse, with the pin placed directly in the centre. The Royal Canadian Legion advises that the poppy should not be defaced in any way, including being worn with a pin other than the one provided.

4. When I place a donation in a poppy box, where does it go?

The Royal Canadian Legion’s Poppy Fund donations are used to support Canadian veterans and their families, as well as members of the Canadian Armed Forces and RCMP. This includes grants for medication, food, care facilities, housing, and emergency shelter.