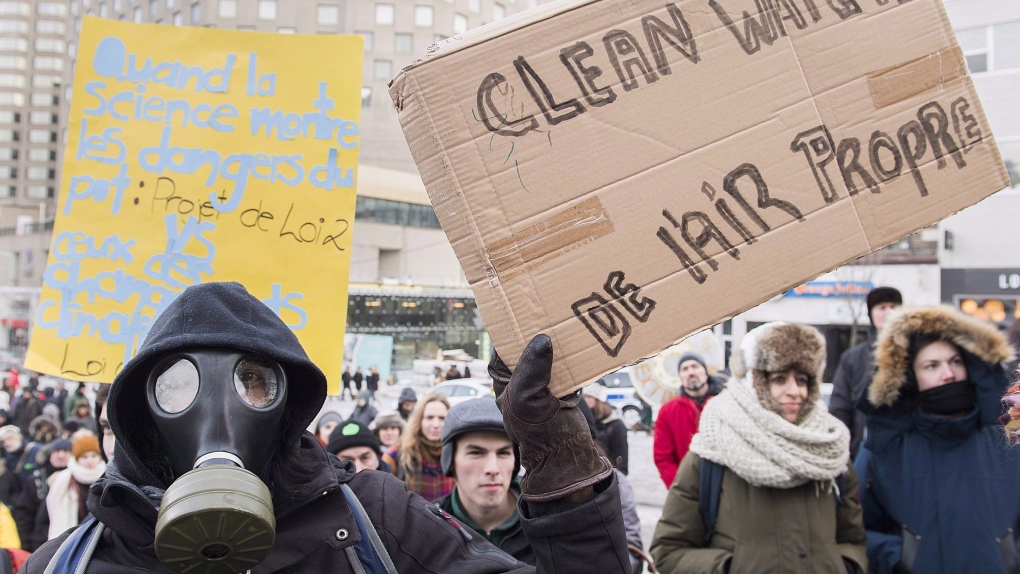 In this file image, people hold up signs demanding action on climate change during a demonstration in Montreal, Saturday, December 8, 2018. THE CANADIAN PRESS/Graham Hughes

MONTREAL -- A Quebec high school French exam question that asked students about adapting to climate change has drawn a torrent of online criticism, as teens used memes and videos to denounce what they see as government inaction on climate issues.

The question on last week's ministry exam for Grade 11 students asked: "Can we adapt to climate change?"

It quickly drew the ire of students like 17-year-old Francis Claude, who feels the way the question was phrased suggests the government has accepted climate change.

"It's like they want to abandon the fight against climate change, and just make do and adapt," said Claude, whose Facebook group dedicated to the exam has exploded to almost 37,000 members in recent days.

Claude said the members of his generation are committed to fighting environmental destruction, not adapting to it.

"What's the point of studying for a future we're not going to have?" said Claude, who attends Mont-Ste-Anne School in Beaupre, 40 kilometres northeast of Quebec City.

Claude said he started the Facebook group so students could exchange study tips and share jokes and memes about the exam process. But it has now morphed into a sort of environmental forum, where students direct their anger at the government and its perceived inaction.

He said many students find it ironic that the Quebec government is testing them on climate change at all.

"I couldn't believe that they'd dare to give us that question when we are the ones who are most concerned with climate change," he said.

Education Minister Jean-Francois Roberge reacted on Twitter last week, saying it would have been better had the exam asked students how to fight climate change, rather than how to adapt to it.

"On the other hand, I'm proud that the youth are so sensitized and mobilized on this issue," he wrote.

Olivia Ralston, another student at Mont-Ste-Anne school, said some students found the question confusing since it didn't really match up to the study materials. She also questioned the use of the word "adapt."

"We are living in this world, and we're not going to live anywhere else, so why shouldn't we try to change it?" she said.

Ralston said some students put a green dot on their exam to signify climate change, and others have since started wearing the symbol as a call for action.

"We're able to raise, I don't know how much money to rebuild the (Notre Dame) Paris cathedral, but for the climate, it's like they do nothing," she said.

The controversy comes as tens of thousands of students across Canada have been staging demonstrations and school strikes as part of a global youth-led movement to demand action on environmental issues.

Claude said many of the students commenting on the exam are planning further action, including another major protest in Montreal and Quebec City on May 17.

Organizers' demands include a government commitment to cap global warming at 1.5 degrees Celsius and to partner with environmentalists to establish an education program to sensitize the public to the climate crisis, he said.