TORONTO -- A Canadian man says he was fired from a job he held for six years because he complained on Twitter about receiving a $6 bottle of barbecue sauce as a holiday gift.

Hussien Mehaidli, 27, worked as a general manager for Fastenal, a U.S.-based wholesaler of construction materials that operates across Canada. When he first joined the company back in 2013, he said he and his coworkers usually received a box of goodies for the holidays.

“You’d get cookies, M&Ms, beef jerky -- a box filled with junk food. We always really appreciated that,” Mehaidli told CTVNews.ca in a phone interview from his home in Burnaby, B.C.

But this year, he was surprised to receive something different: a bottle of hickory-flavoured “Get Sauced” barbecue sauce, which retails on Amazon for $5.99, and a wooden barbecue scraper branded with the company’s logo.

“We don’t live in Australia,” he said.

But besides that, the gift felt like a slap in the face.

“I work really hard. We get pushed really hard to reach our sales goals,” he said. “I felt I gave this company so much and I felt really disrespected when I was given barbecue sauce as a holiday gift.” 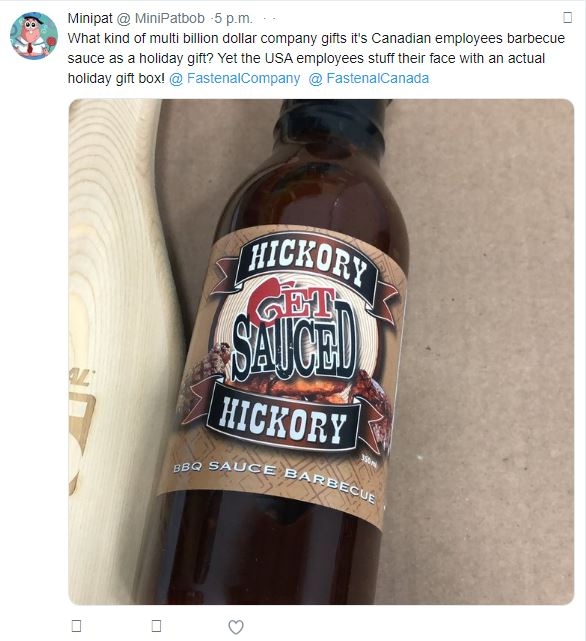 “What kind of multi billion dollar company gifts it's (sic) Canadian employees barbecue sauce as a holiday gift? Yet the USA employees stuff their face with an actual holiday gift box!” he tweeted, tagging the company’s Canadian and American handles.

He also took issue with a letter from the company’s CEO that came with the sauce, which encouraged employees to “share something from the holiday gift box.”

“SHARE WHAT ?? !! MY BARBECUE SAUCE ?? To every Canadian Fastenal employee I am sorry we all had to go through this.”

Mehaidli later followed up with an American colleague, who told him that Fastenal’s American employees received the usual box of goodies.

The day after he sent those tweets, Mehaidli said he got a phone call from his manager. Somehow, he believes the company had figured out who was behind the account.

“He called me by my Twitter name,” Mehaidli said.

He said the manager told him he needed to delete the tweet, but he already had. After sending the tweet, Mehaidli realized that he’d previously tweeted a photo of him buying tickets for a WWE event in Vancouver. The image shows his workplace computer and parts of his workplace in the background.

Ten days later, on the night before New Year’s Eve, Mehaidli said his manager called him in for another meeting. He said he was fired on the spot.

An “exit interview” letter sent to Mehaidli on the day of his termination confirms that he was terminated for “violation of standards of conduct policy – acceptable conduct section.”

Fastenal Canada did not reply to CTVNews.ca's requests for comment by the time of publication.

Getting fired from his job just two days before the new year was a particularly difficult way to start 2020, Mehaidli said.

“Christmas just came by. There are bills to be paid, my visa bill. Money is an issue,” he said. “I’m a very heavy believer in God and everything happens for a reason, but I believe I was done very, very dirty.”

Mehaidli said he was not offered any severance pay. He said his manager told him that he is only being paid for his unused vacation hours, $741 in outstanding commission and his final paycheque.

That could pose a legal problem, according to Richard Johnson, a Vancouver-based employment lawyer.

“It doesn’t sound like they are intending on giving him anything for the post-dismissal period, and I do think he would be entitled to that,” said Johnson, a partner at Kent Employment Law who is not representing Mehaidli.

Severance pay is money paid to employees to cover a period of time after they are fired. The amount is based on a variety of factors, including the employees’ contract with their employer.

In this case, Johnson said, he thinks Mehaidli has the grounds to make a wrongful dismissal claim.

Employees complaining about a problem at work via social media is becoming an increasingly common issue in employment law, Johnson said. But it is risky.

“We are running into this issue really frequently. People are taking to social media, talking about having a bad day, something their managers are doing, internal politics at work. And one of the big issues is if the employer is named in the posts and whether it embarrasses them and whether it diminishes them in the public eye. So employees need to be very careful about this.”

He added that off-duty conduct is being cited as a reason for dismissal in more cases. But in order to be denied severance pay, “it really has to be so bad that it goes to the root of the employment contract,” he said.

Legal issues aside, Johnson said the company should have taken optics into account.

“I think the company will look petty for dismissing him because he aired a view of their gift. It’s placed itself in a precarious position.”

Fastenal has dozens of branches across Canada and more than 21,000 employees worldwide. Last year, the company reported a revenue of US$5.2 billion.

For what it’s worth, Get Sauced & Spiced Inc. is an Edmonton-based company with a five-out-of-five rating on Facebook, where fans have described their barbecue sauces as “awesome,” “flavour-filled” and “so good on wings!”

Mehaidli has not tried the sauce and said he doesn't plan on doing so.