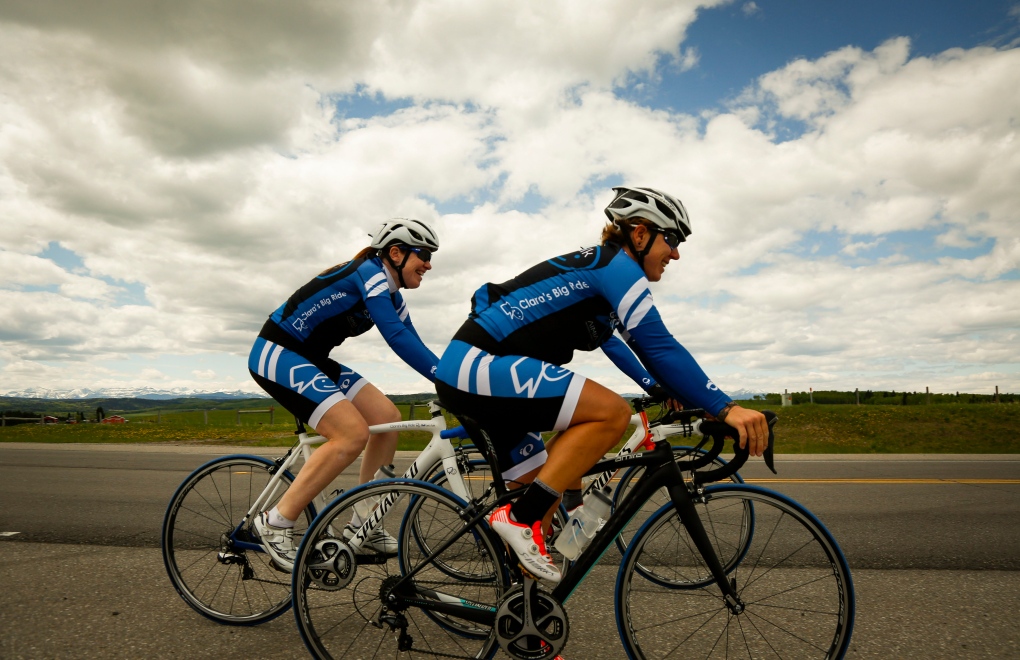 CALGARY -- Clara Hughes rode her bike 11,000 kilometres for 110 days around Canada to get people talking about mental illness. She's pleased the documentary "Clara's Big Ride" isn't just about her.

A one-hour television special chronicling her journey airs Wednesday on CTV and will also be available all day on CTV.ca and CraveTV. It could have been all about cycling through hard crosswinds, driving snow and exhaustion from March 11 to July 1, 2014.

But Hughes instead provides the thread between stories told by Canadians affected by mental illness: a teacher who has depression, anxiety and panic attacks; a university student who attempted suicide; a community worker in northern Canada trying to prevent youth suicide; a soldier with post-traumatic stress disorder.

Hughes, winner of six Olympic medals in cycling and speed skating, will join them in Toronto on Tuesday for a special screening of the documentary.

"Of course it brings back so many emotions of what that ride was," she told The Canadian Press.

"What I like the most about it, and what I think people will be very surprised at, is most of it is not actually about riding a bike. It's not about me. It's about 10 different stories along the way of predominantly younger Canadians and what their struggle was, what their story is."

It's been almost seven months since the 42-year-old from Winnipeg concluded her epic ride on Parliament Hill in Ottawa. She participated in 235 events in 105 communities.

Hughes feels she achieved her goal of starting a conversation about mental illness and removing the fear of talking about it.

But she sees Canada's health system and how it treats mental illness as another mountain to be climbed. A woman struggling with an eating disorder says in the documentary that she was told by her doctor to "just eat something".

Another with depression says she was told by her physician to not talk about it because people would judge her.

"What I'm seeing is we have a big problem in that the system is not there, and if it is there, it is not yet trusted for people to reach to," Hughes said.

"The conversation is stimulated and people are really reaching out more and more and more, but what is there for them to reach out to? This is the reality. This is a big problem to be solved."

Hughes became a spokesperson for the Bell Let's Talk campaign because of her own experience with depression.

The documentary does address the ride's physical and mental toll on Hughes, who internalized inspiring and heartbreaking stories she heard from people along the way.

She sometimes rode 200 kilometres in a day. Hughes relied on husband Peter Guzman, who rode with her, and a support team to help her to the finish line.

"That exhaustion that was briefly shown was an every single day reality probably for the last 85 days of the ride," Hughes said.

So the woman who says "movement is my medicine" has chosen to process and reflect on her ride by embarking on another long-distance journey.

Hughes and Guzman hiked 850 kilometres of the Appalachian Trail from Dec. 3 to Jan. 12 and winter-camped along the way. They intend to return to the trail in February and eventually complete the 3,746-kilometre trek that traverses 14 U.S. states.

"To be in such a public position for 110 days was something that I didn't know and hadn't experienced before, so quite honestly it took an 850-kilometre very quiet hike with Peter to let it all settle in and connect back with myself," Hughes explained.