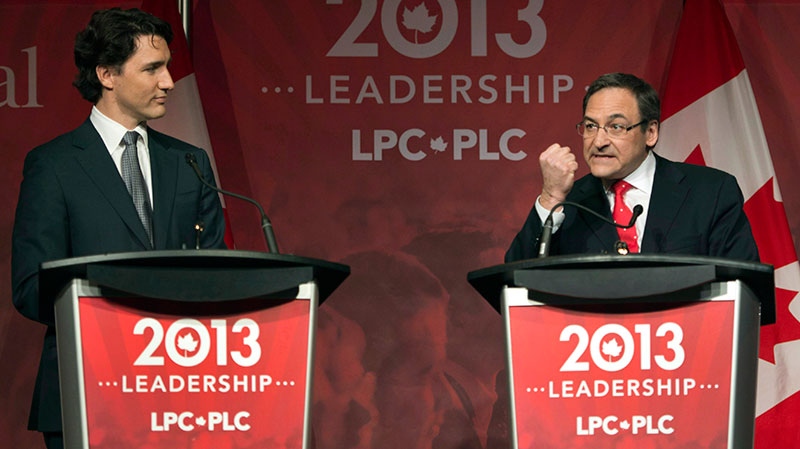 OTTAWA -- Justin Trudeau may be the youngest, hippest Liberal leadership contender but when it comes to Quebec, rival Martin Cauchon says the front runner is a relic of the past.

Trudeau has scoffed at suggestions that attempts must be made to finally secure Quebec's signature on the Constitution -- patriated by his father Pierre Trudeau in 1982 over the objections of the province's separatist government.

But while that was the right answer in the 1980s and 1990s, when Canadians were fed up with interminable constitutional wrangling, Cauchon says it's no longer good enough.

Trudeau's response to the national unity question amounts to "the good old answers that people used to give" in the wake of failed constitutional negotiations, Cauchon told The Canadian Press during a wide-ranging interview.

"Now it's not the time to go back with those, I would say, empty answers that a lot of people have been using in the past," he said.

"I say it's time, actually, to have a closer look at the situation."

Cauchon is not suggesting the constitutional can of worms be reopened any time soon, perhaps in 10 or 15 years.

But in the meantime, the federal government must adopt a more open, flexible, co-operative approach to federalism, he said, allowing provinces to assert more control over various areas of jurisdiction, as suits their needs.

Such an approach would be good for both the country and the Liberal party, he maintained.

"When (Quebecers) look at us, the Liberal Party of Canada, they look at a party that always stands for the Ottawa-knows-best type of approach," he said.

Cauchon and Trudeau, a Montreal MP, locked horns over the national unity question during the final Liberal leadership debate in Montreal last weekend. Trudeau used his closing statement to reject the notion that special gestures are needed to placate Quebec.

"We've been doing that for 30 years and I think that we have to really now admit it doesn't work," he said.

"For far too long we've tried to buy Quebec, to buy them off rather than to get them involved ... This is our real challenge. How are we going to bring everybody together and set aside old squabbles and quarrels?"

But Cauchon argued in the interview that Canada's national unity will never be secure as long as Quebecers feel their aspirations aren't reflected in the Constitution.

"We may decide as a country just to keep saying, as Justin said over the weekend, it's an old question, something from the past," he said.

Moreover, the Liberal party's hoped for revival in the province hinges on its willingness to resolve the unity question, Cauchon added.

"It's not in refusing to look into the national unity file that we're going to go back in the province of Quebec. That's what I believe."

Should he win the leadership, Cauchon reiterated that he'd run in the Quebec riding of Charlevoix, where he was born and where he fought his first election -- unsuccessfully -- against then prime minister Brian Mulroney in 1988.

He refused to say if he'll run for election if he does not win the leadership.

"I'm not there yet," he said, insisting that he still intends to win the party crown, despite indications that Trudeau enjoys a commanding lead.

Cauchon represented the Montreal riding of Outremont for 10 years before retiring in 2004 to practice law. He attempted a comeback in his old riding in the 2011 election but lost to New Democrat Tom Mulcair, now NDP leader.