Meat and dairy are out. Plants and water are in.

Those appear to be the biggest takeaways from the newest version of Canada’s Food Guide, which was released Tuesday by Health Minister Ginette Petitpas Taylor.

“It puts more focus on what, when and how we eat, and less on food groups and servings. It gives clear, concise advice that everyone can easily apply to their everyday lives,” Petitpas Taylor said at the guide’s unveiling event in Montreal.

One of the most notable changes is the elimination of the four traditional food groups, which had been part of the federal government’s nutrition advice, in one form or another, since 1942.

Whole grains, vegetables and fruits are still listed as an integral part of a healthy diet, but the traditional focus on the likes of meat and milk is gone in favour of the broader category of proteins.

There is a specific recommendation that Canadians consume plant-based proteins “more often” and cut down on their intake of processed meats and saturated fats, which can contribute to cancer, diabetes and other diseases.

Recommended proteins in the guide include “lentils, lean meats, fish, unsweetened milk and fortified soy beverages.” Meat and alternatives had previously been a separate food group, as had milk and alternatives.

The new guide also places a heavy emphasis on water, saying it should be the “beverage of choice” for Canadians. Coffee, tea, lower-fat milk and plant-based beverages are listed as other options, though less preferred.

Fruit juices are not recommended because of their sugar content. The previous edition of the food guide had suggested 100 per cent fruit juice as a way of achieving an optimal amount of fruit. Reducing consumption of sugars, saturated fats and processed foods was a key goal for the government in the development of the new guide.

Also gone from the guide is specific governmental advice on how much food to consume. Health Canada officials say most Canadians found the portion size guidance confusing.

“Trying to have exact amounts for each person is difficult,” Jess Haines, an associate professor of applied nutrition at the University of Guelph, told CTVNews.ca.

The previous version of the guide contained separate dietary advice for six different age groups, half of which were further broken down by sex. Even these did not take into account different body types and lifestyles.

A document to be released later this year will include suggestions on healthy eating patterns, but those suggestions will be targeted toward people creating meal plans for hospitals, prisons and similar settings, and not the general public. 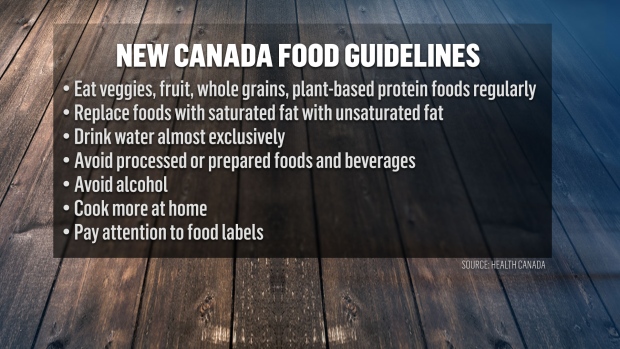 The new guide goes beyond simple nutritional advice, adding information on healthy eating habits such as being aware that food producers may attempt to influence consumer habits through marketing programs, sharing food with other people and cooking at home with raw ingredients.

“Canadians are eating out more often and eating a lot more prepared foods, and those foods are typically higher in saturated fats, salt and sugar,” Haines said.

Although not necessarily top-of-mind for many people, the food guide is considered to play a key role in shaping Canadian nutrition habits. Its recommendations help influence what food is served in public buildings and are promoted by the health-care and education sectors.

Many of the changes announced Tuesday were based on similar concepts already in use in such countries as Belgium, Sweden and Brazil.

The new guide received immediate acclaim from various groups of medical and health professionals, including the Canadian Medical Association, Heart & Stroke and Dietitians of Canada.

Dietitians of Canada CEO Nathalie Savoie said she was happy to see a recommendation that publicly funded institutions align their food offerings with the guide’s advice.

“When it’s easier to purchase vegetables, fruit, whole grains and protein foods than it is to buy highly [processed] foods and beverages, Canadians will make healthier choices,” she said.

Canada Beef spokesperson Joyce Parslow said her organization was pleased with the food guide’s suggested meal approach of 50 per cent fruits and vegetables, 25 per cent whole grains and 25 per cent proteins.

“We’re very supportive of plant-based eating, and we do need to eat more fruits and vegetables,” she told CTV News Channel, adding that she hoped Canadians would continue to consume the “complete protein options” of beef and other meats.

A less positive reaction came from the Dairy Farmers of Canada advocacy group, which said it was “concerned” by the new food guide’s lesser emphasis on milk. The group also took issue with the food guide’s promotion of lower-fat milk only.

“Current and emerging scientific evidence does not support a continued focus on lower fat milk products as it reveals that milk products that contain more fat are not associated with harmful health effects and could even provide benefits,” Isabelle Neiderer, the organization’s director of nutrition and research, said in a statement.

The government doesn’t plan a similar decade-plus wait before its next changes, instead saying the guide will now evolve gradually as new nutritional evidence comes to the government’s attention.