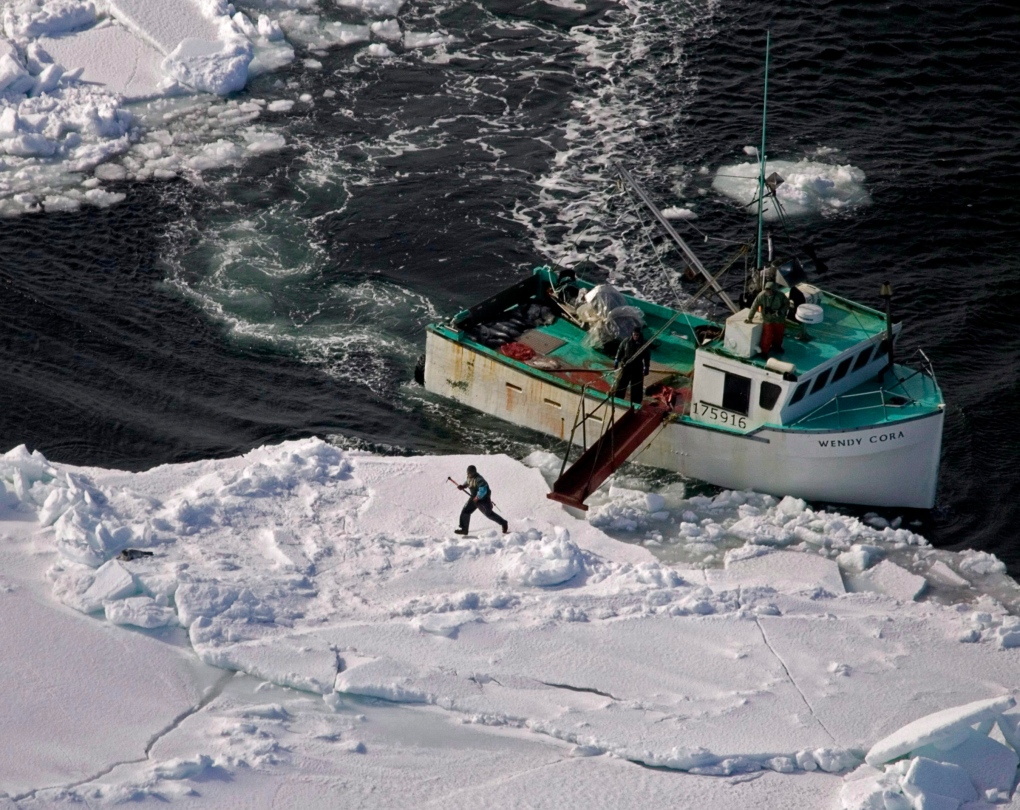 A hunter heads towards a harp seal during the annual East Coast seal hunt in the southern Gulf of St. Lawrence around Quebec's Iles de la Madeleine on March 25, 2009. (Andrew Vaughan / THE CANADIAN PRESS)

A WTO appeal decision released in Geneva upheld a previous ruling that the European Union ban is "necessary to protect public morals" regarding animal welfare.

But the three-member panel agreed with the prior dispute settlement finding that exemptions to the ban have not been fairly applied.

It says the embargo "constitutes a means of arbitrary or unjustifiable discrimination," particularly because of how exemptions for seal products from Inuit or indigenous communities are handled.

It finds the EU has not sufficiently shown how its treatment of indigenous versus commercial hunts "can be reconciled with the objective of addressing EU public moral concerns regarding seal welfare."

It also found "considerable ambiguity" in how terms such as "subsistence" are used for Inuit harvests. And it raises concerns that vague criteria could allow seal products from commercial hunts to enter EU markets under indigenous exemptions.

Canada appealed a November ruling that said while the EU seal ban undermines fair trade, those restrictions can be justified on "public moral concerns" for animal welfare.

At issue was a challenge by Canada and Norway of the 28-member EU's 2010 ban on the import and sale of seal fur, meat and other products.

The WTO appeal panel agreed with the November ruling that exemptions do not give the same market access to Canadian and Norwegian seal products as those from Greenland.

Terry Audla, president of the Inuit Tapiriit Kanatami representing about 55,000 Canadian Inuit, said his people were never consulted and never agreed with the embargo or its uneven exceptions.

"I am morally outraged at the self-righteousness and sanctimoniousness of the EU's claim to protect the morals of its citizens," he said in a statement.

Inuit hunters are trying to feed their families and make a living in the modern economy, he added.

"It is morally reprehensible for anyone to impede those goals, which are the basic rights of any citizen of the world."

The federal government said in a statement the appeal decision confirms the ban is "arbitrarily and unjustifiably applied."

"Canada's position has been that the eastern and northern seal harvests are humane, sustainable and well-regulated activities that provide an important source of food and income for coastal and Inuit communities," it said.

"The ban on seal products adopted in the European Union was a political decision that has no basis in fact or science."

"It found that it violates the EU's international trade obligations so it does require response," she said. "It's something that we will certainly be monitoring closely."

It's the end of the line for appeals at the WTO, but Shea said Ottawa will continue to support the seal hunt through new product research and other measures.

"The ban will need some amendments to make it WTO compliant," said Rebecca Aldworth, executive director of Humane Society International-Canada. "However, those are very small amendments that will happen, I think, very quickly. And ultimately the ban can stay in place pretty much as it is."

Aldworth said it's time for Ottawa to refocus its efforts.

"We hope that with this ruling, the Canadian government will stop trying to fight this futile battle to prop up the outdated and cruel commercial seal hunt and instead invest its energy in branding and labelling Inuit seal products so that they can once again resume access to the EU market."

Sheryl Fink, director of Canadian wildlife campaigns for the International Fund for Animal Welfare, said the decision could ultimately protect other species.

"This is a very exciting development. Hopefully it will have positive repercussions for other animals that are affected by trade as well."

The commercial seal hunt off Newfoundland last spring landed about 91,000 harp seals, up from 69,000 the year before but far short of the federal quota of 400,000.

About 900,000 seals are hunted globally each year, says the European Commission. Countries that commercially hunt seals include Canada, Norway, Greenland and Namibia.

Other countries that ban imported seal products include the U.S., Mexico, Russia and Taiwan.