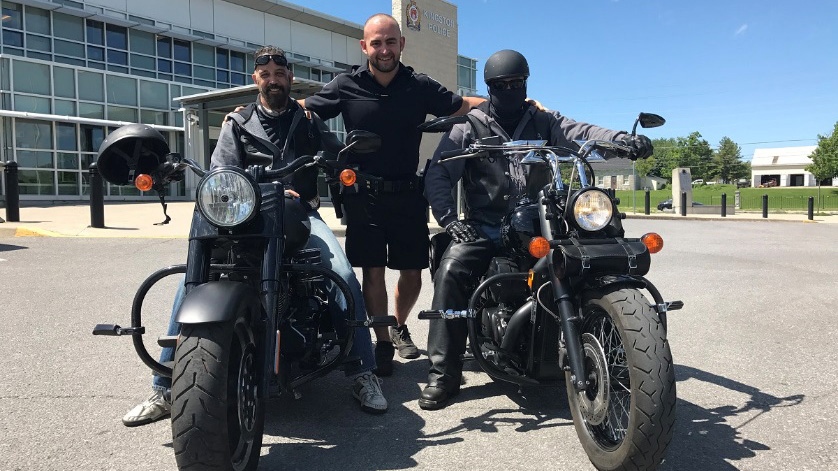 Police in Kingston, Ont. have given a shout-out to two “bad looking bikers” who came to the aid of an officer who was allegedly attacked and injured while on duty earlier this week.

In a news release Thursday, Kingston police said an officer was on bicycle patrol around 2 p.m. on June 7, when he spotted a man wanted by police.

The officer, police said, fell to the ground during the confrontation. According to police, “two heroes” who were riding their Harley motorcycles in the area witnessed the encounter. They jumped off their bikes to pull the accused off the officer.

With the assistance of the bikers, police said the accused was restrained until other officers arrived.

The news release noted that, while bystanders “stood by and filmed the attack on the officer, the two heroes came to the rescue.”

It turns out the bikers were retired military police officers who had both previously served tours of duty in Afghanistan. Both men belong to a motorcycle club called Just Every Riders Known Soldiers, or J.E.R.K.S.

“The military and police share a strong common bond of serving and protecting,” the news release stated. “Kingston Police would like to thank these two heroes for coming to the aid of one of our officers.”

The on-duty officer, identified as Cst. Wisniak, suffered a minor injury in the confrontation, police said.

The accused, meanwhile, has been charged with assault, resisting arrest and breach of probation.