'Adventure athletes' get out of the gym, into the fire 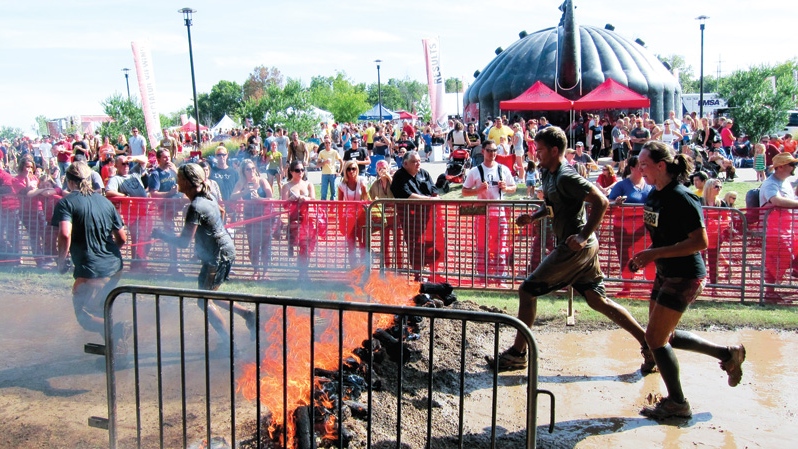 Participants prepare to jump over fire during the 'Warrior Dash,' a grueling 5K race complete with 12 different obstacles, in this undated photo. (www.warriordash.com)

It used to be that a fitness challenge for the average desk jockey was a 5-kilometre charity run followed by brunch or beers with friends.

These days, though, weekend warriors are upping the ante, taking on ever-more-difficult challenges to test their strength and endurance.

Following the popularity of marathons and triathlons, adventure racing has exploded in popularity in recent years, and its 10- to -12-mile obstacle courses of ice-cold waters, mud crawls, balls of fire and electric shocks have given new meaning to bragging rights.

To train for these races, or challenges as some of the events prefer to be called due to the absence of a timing clock, participants have been turning to CrossFit, a high-intensity form of exercise that builds strength, endurance and flexibility all in one go.

“It’s just another way to express your fitness, your physicality, your adventure. That’s what it’s about,” says Dhani Oks, a co-owner of Academy of Lions, a CrossFit studio in Toronto.

“I love this new dawn of the adventure athlete, I call it. We’re very fitness-crazed, but we’re not always getting the results we want (at a commercial gym) because I think we’re doing it in the wrong way. When you start to look at these being outside and working through physical challenges that are very stimulating in many different ways, that’s when you start getting the real results from your fitness.”

While no one can say for sure which is leading the way as CrossFit and adventure racing grow in popularity, Oks said clients come to his facility because they “want to achieve a high level of fitness,” and weren’t getting the results at a commercial gym.

CrossFit is a gruelling workout, and though all gyms are affiliated with a governing body, each facility puts the theory into practice in its own way. A workout typically includes heavy Olympic-style weight-lifting, kettle bells or other strength work followed by conditioning exercises that are geared to specific goals, such as greater cardiovascular endurance or more explosive movement.

After enduring a workout that would leave many Olympians short of breath, Average Joes start looking for the next challenge.

“I think what’s been happening is people who are doing stuff in the gym want to challenge themselves in a different setting. And the possibility of doing a Tough Mudder, which before might have been absolutely crazy, now seems, ‘You know what? I can do that.’”

A Tough Mudder is just one of the many events in the burgeoning obstacle course-event industry. It was created by a former counter-terrorism agent for the British government while he was working on his MBA at Harvard.

The courses are designed by British Special Forces members “to test your all around strength, stamina, mental grit and camaraderie,” says the website.

Competitors register in teams to get each other through “mud, fire, ice-water and 10,000 volts of electricity,” and over 12-foot walls and through underground mud tunnels.

The two-day event has four challenges in Canada, the next being Aug. 18 and 19 at the Mount St. Louis Moonstone Ski resort just north of Toronto.

As with most adventure challenges, the Tough Mudder also serves as a fundraising event, in this case for the Wounded Warrior Project.

Jane Di Leo, the public relations manager for Tough Mudder, says mud runs and adventure races not only allow participants to meet fitness goals, but also conquer fears, many of which may appear as obstacles in the course.

It’s also about having something to brag about on Facebook.

“Our goal is that a guy is going to walk into a bar, tell a girl he’s a Tough Mudder and she’s going to be super-impressed. That’s what it’s all about,” Di Leo says, who completed a Tough Mudder earlier this year, pointing out that they are popular with women, too.

“It’s the weekend warrior, it’s the guy who’s sitting in his desk on Wall Street or wherever and saying, ‘I used to be a stud in high school, I was on the track team, I was on the football team, and now all I do is go to the gym once in a while, lift a few weights, run a little bit, try to maintain my body, but what am I really doing?’”

Other big events in the obstacle-course industry include:

At CrossFit Toronto, which seven years ago was one of only a few CrossFit gyms in all of Canada, John Vivian says the goal isn’t to train clients specifically for an adventure race or obstacle course.

But he says many participants come to his facility when they want to train for such an event, or get the idea to register from their CrossFit workouts.

“Nonetheless, it’s an outside-the-gym experience. So in a CrossFit facility, they’ll do the training and when they go on to these obstacle races or obstacle courses, that’s where they actually get to express their fitness. So they are taking it from the training environment to the actual on-the-field environment.”

Vivian says that as a trainer, he isn’t so worried about his clients getting electrocuted or suffering hypothermia on the course, though he expects the experience to be grueling.

But his biggest concern is that they are adequately prepared for a course that can take hours to complete, which is why he runs clinics at his gym to teach clients how to stay hydrated, nourished and safe during an event.

For Oks, CrossFit and adventure racing may seem gruelling, but are also about having fun.

“It takes you back to a very primitive, almost childlike form of play and adventure,” he says.