For a minimum of $550, guests at “Dinner With A View” enjoy a three-course meal prepared by former “Top Chef Canada” winner Rene Rodriguez, while seated in terrarium-like domes. The event is located in an area under the city’s Gardiner Expressway known as the “Bentway,” close to where city officials removed a large homeless encampment on March 13.

The Ontario Coalition Against Poverty (OCAP) says it’s opposed to the heated, terrarium-like domes placed for diners near the area where homeless people were evicted after struggling to survive all winter. That’s why activists staged a free counter-event Friday called “Dinner With A View Of The Rich.”

“In our city, homeless people living under the Gardiner with no heat are evicted, meanwhile pop-up restaurants serving luxury dinners in heated domes under that same highway are granted permits. The brazenness in our opinion begs a challenge and we’re happy to oblige,” Yogi Acharya, event organizer and activist with OCAP, said in an interview with CTVNews.ca.

The domes are temporary and will be removed once the event ends in May. Protesters brought noisemakers such as drums and speakers and were as loud and lively as possible in an effort to disrupt the diners.

But Acharya wants to make it clear that OCAP’s “beef” is with the City of Toronto, Mayor John Tory and his backers. Activists said they want the city to stop closing down respite sites without adequate replacements and they want officials to build more shelters so that people don’t have to sleep in tents under the Gardiner. OCAP also wants the city to buy land and create more rent-geared-to-income housing.

Dinner With A View responded in a public post stating they were familiar with OCAP’s plans to protest.

“We are very sympathetic to Toronto’s homelessness crisis for sure, but please understand that there were no encampments removed to make room for this event. The encampment removal was approximately 2 kilometres away and we were committed to our location nearly a month before this happened,” a spokesperson with Dinner with a View said in an interview with CTVNews.ca.

The same spokesperson said both the venue and the dining event are independently run.

“Dinner with a View is an independent organized event. Our venue, the Bentway, is run by an independent charity and is also not an agency of the City of Toronto. Events like ours generate funds that allow the Bentway to offer free, low-cost programming for the entire year,” the spokesperson said.

“We for sure respect the right to protest, I just ask that people please respect our patrons and our staff.”

The pop-up was prepared for the protest by having police present and putting a tarp on their fence to hide the domes. Protesters destroyed the fence around the pop-up in an effort to expose the diners. Police patrolled the barrier and stopped anyone from trying to pull down the tarp, climb in or throw things into the event.

Protesters yelled “shame on you” at every guest walking in or out of the pop-up event. They were also chanting, “eat the rich, feed the poor” and holding up signs that said things like “build shelter and social housing.”

A representative from the pop-up declined to comment during the protest. 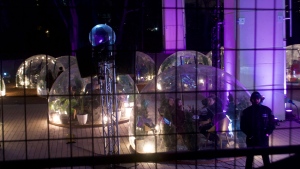