About 12,500 employees from OPG and Hydro One made the list, up nearly 1,000 over 2013, when the auditor general warned those salaries were driving up electricity rates.

Amit Chakma, president and vice-chancellor at the University of Western Ontario, was third at $967,000, which was double his normal salary because he worked through a scheduled one-year leave.

University of Toronto CEO William Moriarty was fourth on the list at $939,000.

More than 100 people on the list work for the Toronto 2015 Pan Am/Parapan Am Games Organizing Committee.

Premier Kathleen Wynne, who was paid $209,000, said the government must pay for the high-quality public services it wants to provide.

The New Democrats said Wynne did little to rein in salaries of public sector CEOs, which they want capped at $418,000 a year -- double the premier's salary.

"Public sector CEOs have hit the jackpot in Ontario," said NDP finance critic Catherine Fife. "In the face of public service cuts, these bloated CEO salaries are a slap in the face to Ontarians." 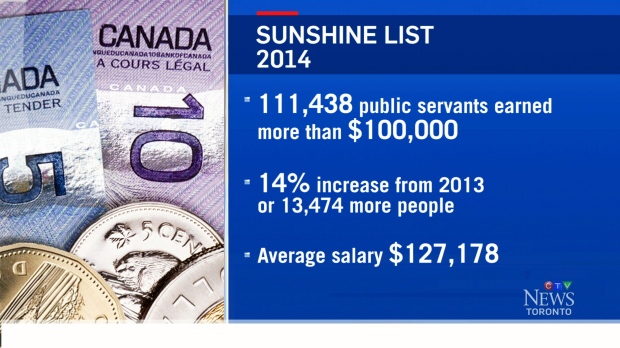 The Progressive Conservatives warned the 14-per-cent jump in the number of people on the list -- to 111,440 -- when the government is refusing to fund pay hikes means there will be fewer teachers and nurses employed.

"When the wage envelope is frozen but salaries go up, it only stands to reason that there will be fewer people on the payroll," said PC critic Lisa MacLeod.

The six-volume report of big public sector earners, which includes nurses, teachers, police and firefighters in addition to civil servants, grew by over 13,600 from 2013.

The government said most of the growth -- 38 per cent, or 5,114 individuals --came from police and firefighters. 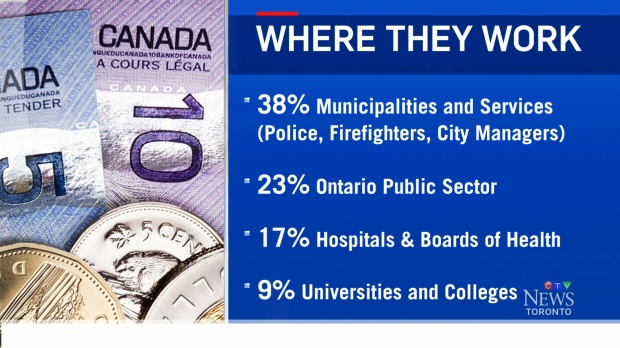 The Conservatives oppose raising the $100,000 threshold, which was first set when the sunshine list was created in 1996, while the NDP said government "should have the courage to have that conversation."

But Wynne said she had "no intention" of raising the threshold, which would rise to $145,000 if it was indexed to inflation, and would reduce the number of names on the list by nearly 83 per cent to just 19,260.

"One hundred thousand dollars is still a lot of money," she said.