Canada's Rush: one of rock's most overlooked bands? 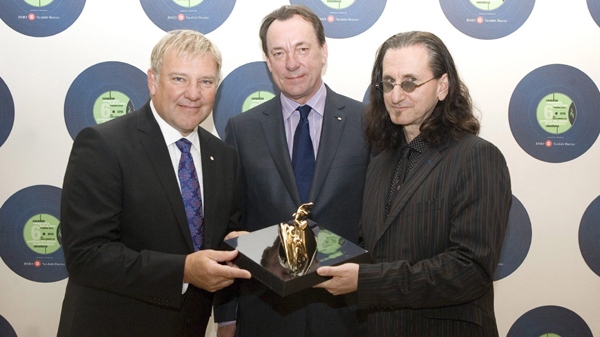 Alex Lifeson, left, Neil Peart, centre, and Geddy Lee of the band Rush pose with a trophy during a photo opportunity ahead of ceremony to induct them into the Canadian Songwriters Hall of Fame in Toronto on Sunday March 28, 2010. THE CANADIAN PRESS/Chris Young

TORONTO - Music documentarians Scot McFadyen and Sam Dunn are making the case that Canadian trio Rush, although beloved by its faithful fans, is one of rock's most-overlooked bands.

"We've been making films around the world and meeting with rock and metal fans and being Canadian, whenever we would meet people they would say, 'Rush! Canada's the home of Rush!"' said McFadyen.

"We came to the realization that globally, Rush is kind of recognized as Canada's rock ambassadors from fans of all ages, I think it made me realize this band has a much bigger impact around the world than a lot of Canadians certainly appreciate, so it seemed like a story that needed to be told."

"Rush: Beyond the Lighted Stage" is one of the first films to screen at Toronto's Hot Docs documentary festival, which kicks off Thursday. The festival opener is "Babies," director Thomas Balmes' look at the early lives of four newborns in Namibia, Mongolia, Japan and the United States.

Other highlights at the festival include John Kastner's "Life With Murder," about a teen who is convicted of killing his sister; "Entourage" star Adrian Grenier's "Teenage Paparazzo," about a young celebrity shutterbug; and "Kings of Pastry" by legendary doc makers Chris Hegedus & D.A. Pennebaker.

"Rush: Beyond the Lighted Stage" traces the three-piece's history from its high school beginnings in Toronto to its world domination -- sort of.

While Rush is ranked third for having the most consecutive gold or platinum studio albums, behind only the Beatles and Rolling Stones, McFadyen said the film is essentially about how underappreciated the perennially uncool band has been outside its rabid fanbase.

"We loved this idea that Rush was not a fashionable band, they were always kind of chasing fashion rather than defining fashion," he said.

It wasn't difficult to get famous musicians to talk on camera about how Rush influenced their lives, said Dunn.

Among the big names who sing Rush's praises are Trent Reznor, Billy Corgan, Gene Simmons and a long list of other famous admirers.

"They were very open to coming to talk to us -- very honoured, in fact -- and it comes across, when we talk to them. It's very personal, very sincere, Rush's influence on them," Dunn said.

McFadyen said the documentary was made to appeal to more than just diehard Rush fans and does so by looking at the personal elements of the band's back story.

"Whether you're a Rush fan or not you can relate to people who have struggled to stick to what they want to do in life, so it's a very human story in that sense," he said.

The tail end of the film turns sombre as it chronicles a tragic string of months for drummer Neil Peart, who lost his 19-year-old daughter in a car crash in 1997, and then his common-law wife to cancer less than a year later.

"When it came to his personal tragedies we wanted to address that part of the Rush story because it was a big moment in the band's career, it was a moment when they thought they might not go on, so it defined a certain chapter in the band's history," he said.

"But it wasn't about dwelling on the details of what Neil had gone through emotionally and personally but more about how it shaped the band."

The film will be screened outside the festival on June 10 in Calgary, Montreal, Toronto, and Vancouver before being released on DVD later in the month.