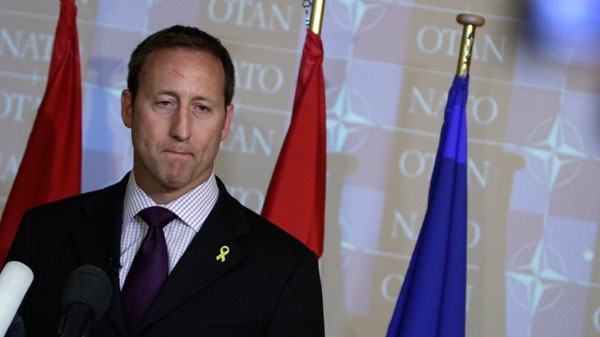 Defense minister Peter MacKay listens to questions during a media conference at a meeting of NATO defense ministers at NATO headquarters in Brussels on Thursday, June 9, 2011. (AP / Virginia Mayo)

Canada's mission to Libya has cost $26 million to date, and the price tag will likely more than double by the fall, said Defence Minister Peter MacKay at a NATO summit.

Canada is a participant in a NATO-led mission to protect Libya's civilian population from fighters loyal to Moammar Gadhafi.

"The cost of this leadership, with respect to Canada's contribution to protect civilian lives, is estimated currently at $26 million until June 2, and we need to continue the momentum we've achieved thus far," MacKay told a news conference Wednesday in Brussels.

On Tuesday, MPs will vote in the House of Commons on a proposal to extend the four-month old Libya mission to September, a move that would be in line with NATO's timeline.

Doing so, MacKay said, would bring the cost of the mission to about $60 million.

The costs are associated with Canada's fighter and patrol planes which have been helping protect civilians since March when the United Nations voted to impose a no-fly zone over Libya.

While Libyan rebels initially made great strides in their uprising to oust Gadhafi, the battle has slipped into stalemate in recent weeks. While rebels control large parts of eastern Libya, Gadhafi's stronghold is in the west.

NATO Secretary-General Anders Fogh Rasmussen said recently NATO has no plans to remain in Libya after the conflict ends.