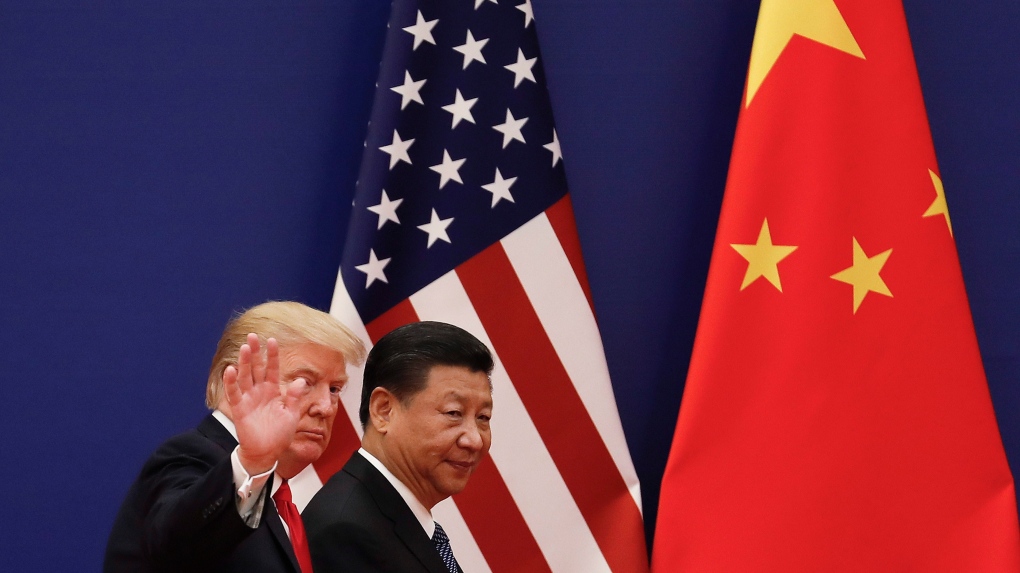 In this Nov. 9, 2017 file photo, U.S. President Donald Trump waves next to Chinese President Xi Jinping after attending a business event at the Great Hall of the People in Beijing. (AP Photo/Andy Wong, File)

BEIJING -- With China and the United States opening the door to a meeting next month between Presidents Xi Jinping and Donald Trump, hopes are rising for a potential easing of tensions in the trade war between the world's two largest economies.

Worries about the increased tariffs the two sides have imposed on each other's goods have contributed to this week's dizzying volatility in financial markets. The higher tariffs have elevated costs for companies in both countries, and economists say that if they remain in place indefinitely, they could depress economic growth.

A Xi-Trump meeting, if it happens, would take place during a summit of leaders of the Group of 20 biggest global economies in Argentina in late November.

In Bali, Indonesia, where he's attending global finance meetings, Treasury Secretary Steven Mnuchin said, "We are having discussions about a potential meeting."

Later Friday, Larry Kudlow, Trump's top economic adviser, said in Washington that preparations for the talks were under way.

Kudlow said that so far, the administration viewed China's negotiating offers as "rather unsatisfactory" but that "maybe talks between the two heads of state will bear fruit."

The trade feud has been fueled by U.S. accusations that China engages in cyber-theft and coerces foreign companies into handing over technology in return for access to the Chinese market, as well as by Trump's anger over China's trade surplus with the U.S. It is far from clear that the U.S. might be preparing to consider lifting penalty tariffs on about $250 billion of Chinese products.

Mnuchin suggested that the two leaders could meet next month if the Trump administration felt trade discussions were moving in a positive direction.

"We need to do work in advance to be sure there are changes and we can have a more balanced trading relationship," the Treasury secretary said. "And that we're going to be make sure we don't have forced joint transfers and forced transfer of technology."

Lu Kang, a spokesman for China's Foreign Ministry, offered no specifics Friday but said, "I have also seen the relevant reports."

The Wall Street Journal and the Washington Post have cited officials as saying Trump has decided to proceed with a meeting with Xi.

Global indexes bounced back sharply Friday after their recent plunges, on word of the possible presidential meeting, along with strong Chinese export data. Japan's Nikkei 225 index gained 0.5 per cent to 22,694.66 after a nearly 4 per cent loss on Thursday.

On Wall Street, the Dow Jones Industrial Average jumped 305 points, or 1.2 per cent, in late-morning trading, and the Nasdaq composite surged 138 points, or 1.9 per cent. Later, both stock indexes gave up much of their gains.

Friday's volatility followed a swoon over the previous two days that erased 1,300 points from the Dow and dragged the S&P 500 down more than 5 per cent.

Reports that Mnuchin has advised against labeling China a currency manipulator -- a status that could trigger penalties -- were also seen as easing tensions. The Chinese currency has been falling in value against the dollar in recent months, raising concerns that Beijing is devaluing its currency to make Chinese goods more competitive against U.S. products.

In his comments in Bali, Mnuchin did not say what the forthcoming Treasury report, set to come out next week, will conclude about China's currency practices. In the past, Treasury has placed China on a watch-list but found that Beijing did not meet the threshold to be labeled a currency manipulator.

"I expressed my concerns about the weakness of the currency." Mnuchin said.

He said that in the discussions he had with the Chinese, they had made clear that they didn't see a further weakening of the Chinese yuan as being in their interests.

Concerns have been raised that China, the largest foreign holder of U.S. Treasurys, might start dumping its holdings as a way to pressure the United States in the trade dispute. But Mnuchin said this possibility didn't concern him because it would be contrary to Beijing's economic interests to start dumping its Treasury holdings.

"That would be very costly for them," Mnuchin said.

Beijing's exports to the United States have at least temporarily defied forecasts they would weaken after being hit by punitive U.S. tariffs of up to 25 per cent.

September marked the second straight record Chinese monthly trade surplus with the United States. Export numbers have been buoyed by producers rushing to fill orders before American tariffs rose. But they also benefit from "robust U.S. demand" and a weaker Chinese currency, which makes their goods cheaper abroad, Louis Kuijs of Oxford Economics said in a report.

The Chinese yuan has lost nearly 10 per cent of its value against the dollar this year. That prompted suggestions Beijing might weaken the exchange rate to help exporters. But that might hurt China's economy by encouraging an outflow of capital. The central bank has tightened controls on currency trading to prevent further declines.

Crutsinger reported from Washington. Associated Press writers Joe McDonald in Beijing and Annabelle Liang in Singapore contributed to this report.