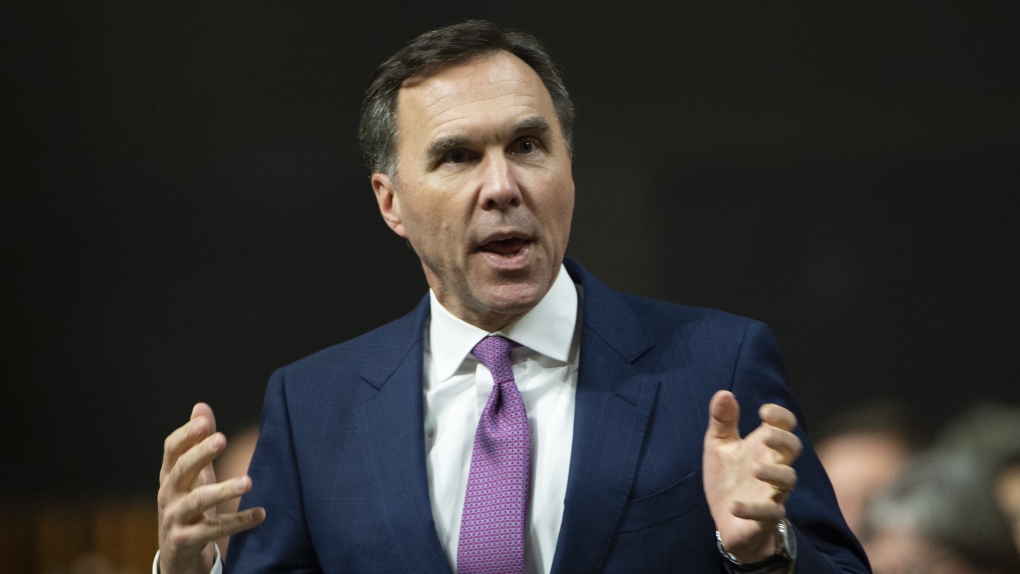 Minister of Finance Bill Morneau responds to a question during Question Period in the House of Commons Monday February 4, 2019 in Ottawa. THE CANADIAN PRESS/Adrian Wyld

Finance Minister Bill Morneau will deliver a report on the state of the economy and federal finances on Monday. Morneau has said he is confident the government's spending plans will keep the economy moving despite global uncertainty. The minister's mandate letter from Prime Minister Justin Trudeau, issued Friday, asked the finance minister to cut taxes but also keep "fiscal firepower" on hand in case the economy goes bad.

Hudson's Bay Co. is set to hold a special shareholder meeting on Tuesday to vote on a going-private proposal from a group of shareholders including HBC executive chairman Richard Baker. The company's stock closed Friday at $8.88, down 25 cents or 2.7 per cent for the week.

Statistics Canada will release its Consumer Price Index for November on Wednesday. The agency last reported that the annual pace of inflation held steady for the third month in a row in October as the consumer price index rose 1.9 per cent compared with a year ago, matching economists' expectations and coming in just shy of the Bank of Canada's target of two per cent.

Canfor Corp. shareholders vote at a special meeting on a takeover offer by Great Pacific Capital Corp. on Wednesday. The forest products company's board recommended in October that shareholders accept the offer of $16 per share, saying it is a significant premium to where the shares were trading before the bid and represented a compelling value proposition for the minority shareholders.

BlackBerry Ltd. holds a conference call to discuss financial results from its fiscal third quarter on Friday. The company's shares suffered their worst one-day loss of the year in September after the company's second-quarter revenue fell short of analyst estimates, blamed on difficulties in a legacy unit that sells software and services to businesses.