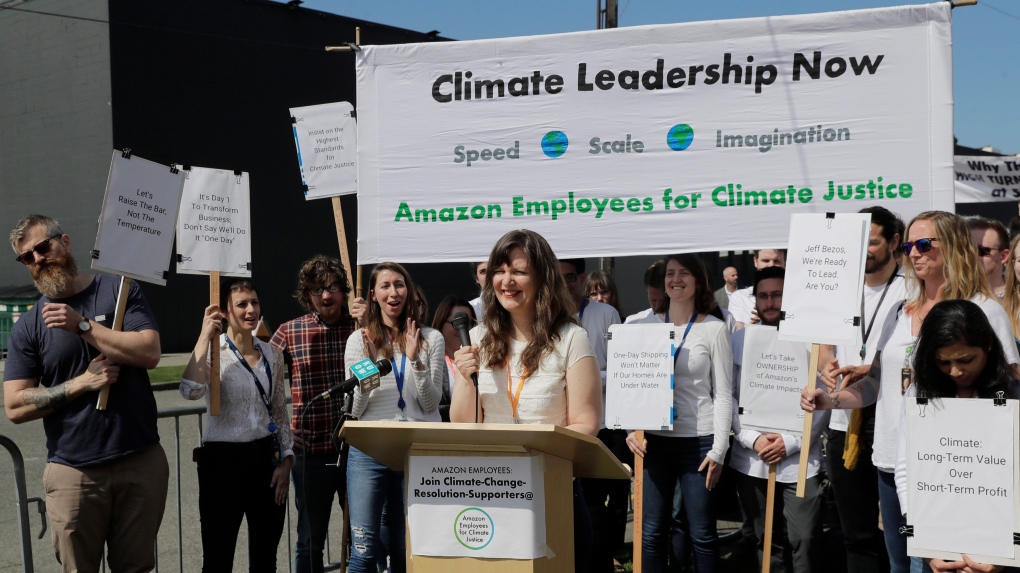 NEW YORK -- Amazon employees say the company is threatening to fire workers for publicly pushing the company to do more to combat climate change.

Amazon Employees For Climate Justice, a climate change advocacy group founded by Amazon workers, said Thursday that the company sent letters to members telling them that they could be fired if they continued to speak to the press.

Amazon, which relies on fossil fuels to power the planes, trucks and vans that ship packages all over the world, has an enormous carbon footprint. And Amazon workers have been vocal in criticizing some of the company's practices.

Last year, more than 8,000 staffers signed an open letter to CEO and founder Jeff Bezos, demanding that Amazon cut its carbon emissions, end its use of fossil fuels and to stop its work with oil companies that use Amazon's technology to locate fossil fuel deposits.

The online shopping giant said Thursday that employees can suggest improvements to how it operates within the company.

"Our policy regarding external communications is not new and we believe is similar to other large companies," Amazon said.

The company in September released details on its carbon footprint for the first time after a campaign by employees. It rivals the emissions of a small country.

Major tech companies have been grappling with how to deal with employees who increasingly are speaking publicly about corporate policies and practices.

Five workers fired from Google late last year have filed federal labour practice complaints against the company, claiming they were let go because they were involved in employee organizing activities. Google disputes that, saying they were let go for violating the company's data security policy. Google employees have protested a wide range of issues at the company, including its handling of sexual misconduct claims.

Amazon has pushed recently to reduce its carbon footprint. It has vowed source all of its energy from solar panels and to achieve carbon neutrality by 2030. An entity can become carbon neutral by balancing carbon emissions with carbon removal.

Carbon dioxide and other greenhouse gases cause global warming, which can lead to rising sea levels and more destructive meteorological events.

Amazon’s success doesn’t need to be built at the expense of people’s health and right to a clean environment. Amazon is capable of thinking big and moving fast — how long must we wait until we apply those strengths to boldly confront the climate crisis? 11/11