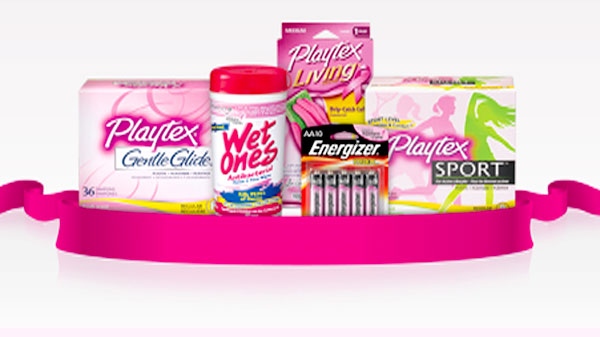 The Breast Cancer Action advocacy group warns shoppers to question what their money is actually funding.

Every October, stores become a sea of pink as shelves fill with products adorned with pink ribbons as part of Breast Cancer Awareness Month. It's all seen as a feel-good win-win: Consumers get the products they want, while helping out a great cause. What could be wrong?

Lots, say groups and breast cancer patients who are sick of companies trying to push shoppers into thinking that pink candies, pink toasters and pink spatulas will make a dent in curing cancer.

It's bad enough, they say, that corporations are profiting off the pink ribbon and the disease that left them feeling anything but pink. It's worse when companies "pinkwash": hitching a ride on the pink ribbon bandwagon to sell products that might actually be linked to cancer.

In 2002, the Breast Cancer Action advocacy group launched the "Think Before You Pink" campaign, warning shoppers to ask questions about what their money is funding.

They successfully went after pink-ribbon sponsor Yoplait, and later Dannon, for using milk from cows treated with bovine growth hormone (rBGH), a hormone that's been linked in some studies to breast cancer. Both companies later bowed to consumer demands and stopped using milk with the hormone.

This year, the Think Before You Pink campaign is targeting alcohol companies that urge people to "pink their drink" because, they say, these drinks are only adding to the breast cancer problem. Alcohol has been linked to breast cancer in a number of studies, and the Canadian Cancer Society advises that even one drink a day on average can increase the risk of breast cancer.

Samantha King, an associate professor of physical and health education and women's studies at Queen's University, in Kingston, Ont., has also raised a stink about pink. In 2006, she wrote "Pink Ribbons Inc.," one of the first critical looks at how breast cancer has been co-opted by corporate ad men and women.

Every October, King says she sees plenty of examples of "pinkwashing," but this year, three questionable campaigns stand out for her.

One is the KFC Buckets for a Cure campaign in the U.S., in which 50 cents from every bucket of fried chicken is going to Susan G. Komen for the Cure.

"KFC sells products that are salt- and fat-laden, and injected with hormones, and they are the subject of a lawsuit in California about a potential carcinogen that they use in the processing of their chicken," King tells CTV.ca.

Another is the annual campaign by Ultramar gas stations in Quebec, in which stations are plastered with big pink ribbons. King notes a number of studies have linked air pollution to breast cancer so encouraging people to buy more gas is not going to help.

But the most mind-boggling pink-ribbon tie-in she's seen is a handgun sold in the U.S. that features a bubblegum pink grip. Its manufacturer promises to donate a portion of proceeds to breast cancer awareness.

"So they're saving lives by taking lives?" asks a bewildered King.

Many have accused the pink ribbon campaign of promoting "slacktivism": the belief that going shopping or "clicking for a cure" will make difference. If people really wanted to contribute to cancer research, they would sit down to write a cheque to a charity or research facility, the argument goes.

But King says she understands why people choose to contribute through pink ribbon merchandising.

"People are really busy and pulled in different directions. And if you have to buy a product anyway and you have to choose between one with a pink ribbon and one without, it's an easy way to feel you are fulfilling your role as a good citizen," she says.

But she also wants to point out what many Canadians may not realize: that the money raised by pink ribbon campaigns and runs for the cure contribute only a fraction of the funds that go into cancer research.

"When you look at Canada as a whole, the federal government still provides the vast majority of funding for research, through the Canadian Institutes of Health Research. The Canadian Breast Cancer Foundation [which claims ownership of the ribbon as an official mark] provides only a small percentage," she says.

King says she believes most people contribute to pink ribbon campaigns with the best of intentions and says she's not seeking to criticize those intentions.

"I'm just trying to draw attention to its limitations. Where is the money really going? How much of it is going there? There are so many questions we need to ask."

Breast Cancer Action, the founder of the Think Before You Pink campaign, offers this list of questions to ask before you buy pink.

1. How much money from your purchase actually goes toward breast cancer?

Breast Cancer Action advises asking yourself: is the amount they're planning to send enough for you? If you can't tell how much money is being donated, or if you don't think it's enough, give directly to the organization instead.

2. What is the maximum amount that will be donated?

BCA notes that many companies place a cap on the amount of money that will be donated. In some cases, that cap be reached fairly quickly. If the cap has already been met, your purchase may not contribute anything to the cause.

3. How are the funds being raised?

Sometimes, a purchase alone is not enough. Some campaigns ask shoppers to visit a website to complete the contribution, or send in a receipt. Since many shoppers won't be willing to take those extra steps, the campaign may not have that much meaning.

4. To what breast cancer organization does the money go, and what types of programs does it support?

Does the product's package tell you where the money goes and what will be done with it? Breast Cancer Action is of the opinion that some branches of research already get plenty of financial support, while other areas like research into the causes of breast cancer go under-funded. Other charities fund breast cancer "awareness" and "promotion," but not research into a cure. Shoppers should let their wallets do the talking about where fundsshould go.

5. What is the company doing to assure that its products are not actually contributing to the breast cancer epidemic?

Among the "pinkwashers" that Breast Cancer Action warns about are car companies, some cosmetics and personal care products companies whose products contain chemicals linked to breast cancer, and a number of chemical companies