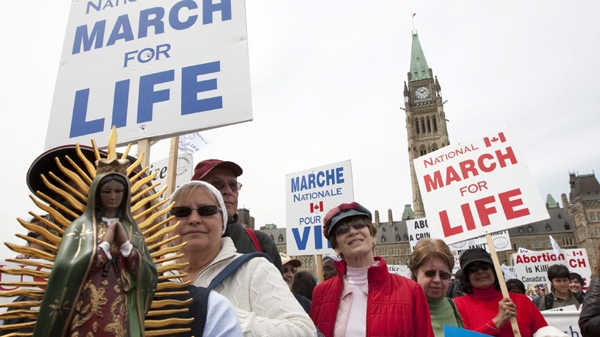 Anti-abortion activists march off of Parliament Hill in Ottawa on Thursday May 13, 2010. (Sean Kilpatrick / THE CANADIAN PRESS)

OTTAWA - Carleton University's student association's decision to join other campuses across the country in banning anti-abortion clubs has stirred legal jousting and prompted a national debate about free speech.

The Ottawa university's student association recently upheld its decision to yank funding from anti-abortion club Carleton Lifeline and revoke its club status at a constitutional board hearing.

That decision followed a public display by club members using graphic posters of bloodied fetuses that compared abortion to the Holocaust. The club's president and several of its members were arrested on trespassing charges during that demonstration in October.

The University of Calgary, Victoria and Guelph have all taken similar steps to cut off anti-abortion clubs.

But effectively banning these groups is stifling political debate in a way that would ultimately be defeated in court, legal experts say.

"I think a freedom-of-expression issue would be raised," said Nathalie Des Rosiers, general counsel for the Canadian Civil Liberties Association.

"In my view, probably denying the right to a pro-life group to express themselves would not be acceptable."

The Carleton anti-abortion club was told their constitution conflicts with the association's discrimination on campus policy. That policy reads: "any campaign, distribution, solicitation, lobbying effort, display, event etc. that seeks to limit or remove a woman's right to choose her options in the case of pregnancy will not be supported."

Those bylaws outline one of the association's aims as "maintaining an academic and social environment free from prejudice, exploitation, abuse or violence on the basis of, but not limited to, sex, race, language, religion, age, national or social status, political affiliation or belief, sexual orientation or marital status."

"CUSA labels themselves as a pro-choice organization," Polizogopoulos said. "They're discriminating against pro-life clubs based on those pro-life clubs political beliefs."

He said his clients plan on fighting their trespassing charges when they go to court.

Those opposed to the anti-abortion campaigns say it's not the groups themselves that are being targeted, but the provocative literature and tactics they use to spread their message.

And it's the prerogative of the student association to not fund those activities, said Tara Paterson, the student and youth representative for the Abortion Rights Coalition of Canada.

"I don't believe it's discriminatory because these groups are more than welcome to carry out their actions. It's simply a matter of students not funding them to do so," Paterson said.

But groups have been punished by university administrations for failing to adhere to the rules that govern campus space.

Carleton Lifeline was offered space indoors to display their posters this fall, university spokesman Jason MacDonald said. The group decided to take the display outside, where they were stopped by campus security officials and later arrested.

But MacDonald said governance of the clubs funding and status is still up to the independent student association.

The University of Calgary threatened several members of the Campus Pro-Life club with expulsion in May after they refused to turn posters away from passersby.

Students must get permission from administration for displays, said university spokesman Grady Semmens.

"Everything like that is certainly dealt with on a case by case basis," he said.

Yet Calgary may also be a rare example of compromise.

Since the scuffle in May, the student government and Campus Pro-Life have agreed to hold anti-abortion events inside classrooms, said Students' Union president Lauren Webber.

"They respect the process on our side," Webber said. "We're lucky that they've complied."

However the issue of controversial materials remains the sticking point in the anti-abortion club debate elsewhere.

The University of Victoria's Students' Society has been at odds with anti-abortion group Youth Protecting Youth since 2008.

The club's status and funds have been revoked multiple times, but were most recently reinstated after the group filed a B.C. Supreme Court petition in May.

They claimed the society had discriminatory policies targeting anti-abortion advocacy.

As a result, the terms "pregnancy," "medical operations" and comparing abortion to genocide were struck from the harassment policy wording, Coccola said.

The debate in Victoria continues next week, thanks to complaints about an event the group hosted in October called "Echoes of the Holocaust."

Des Rosiers warned that denying anti-abortion groups a voice in upholding policies is dangerous, because it sets an alarming precedent for future legitimate debates.

"When they're approaching this issue, they should not diminish their responsibility toward ensuring that university campuses are places where ideas can circulate freely," she said.