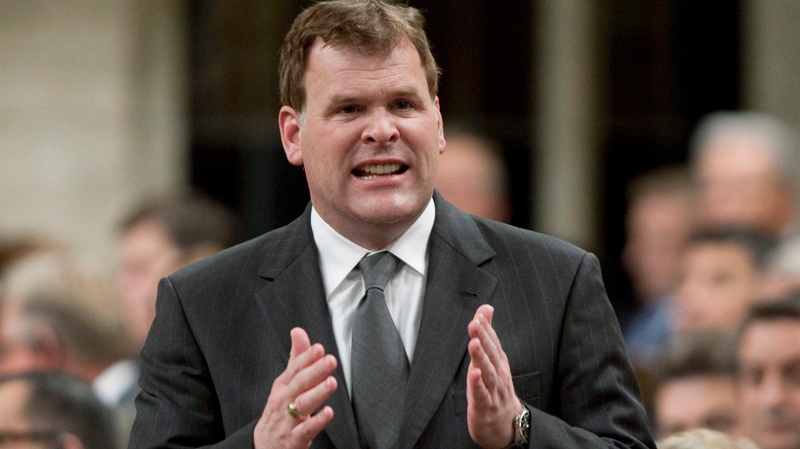 John Baird had to fend off jabs and jokes in the House of Commons Friday after reports surfaced of his new gold-embossed business cards that also left out the word "Canada," against government rules.

The Canadian Press reported that the foreign affairs minister ordered the cards after taking over the post in May.

Despite the fact bureaucrats expressed their concerns over the request, Baird received cards that were not only embossed in gold, but were missing a common "Canada" wordmark that contains a Canadian flag over the last "a." The words "Lester B. Pearson Building" were also removed from the address for the Foreign Affairs Department.

Opposition MPs hammered Baird over the cards in the House of Commons. Liberal MP Scott Brison told the House Friday that Treasury Board rules prohibit gold on business cards because of the cost.

"Why is the minister breaking government rules?" Brison asked. "Why is he giving taxpayers the gold finger?"

Baird got MPs laughing when he replied that he wished that Treasury Board President Tony Clement was present for question period, so he could answer the query. Baird has been criticized in recent days for taking questions directed at Clement about the $50 million G8 legacy fund, as Clement sits quietly in his seat.

"I remember a time when the Liberal Party of Canada used to think big on foreign affairs, they would think about big issues around the world when it came to Canada and domestic issues," Baird went on. "And now they have been returned to the time when they are dealing with $400 worth of business cards."

Brison then accused Baird and Clement of conspiring to siphon G8 legacy funds to Clement's riding and allowing Baird to circumvent government guidelines to design his own cards.

"When Canadian are struggling just to get by, why are Conservative ministers showering each other with gold?" Brison asked. "Why the golden showers, Mr. Speaker?"

Baird struggled to maintain his composure as he replied: "Yes, Mr. Speaker, I sat down with the president of the Treasury Board and said: ‘Have I got a deal for you. I'll give you $50-million worth of infrastructure funds if you will give me $400 worth of business cards.'"

The unilingual cards contain a gold-embossed coat of arms, and the largest type is Baird's name.

The Canadian Press acquired emails, memos and other documents pertaining to the ordering of Baird's cards. While Foreign Affairs bureaucrats were less concerned about the removal of the building name from the address, one bureaucrat expressed concern about losing the Canada wordmark.

"We are ... concerned about the removal of the Canada wordmark," said one official in an email. "As mentioned before, this is a Treasury Board requirement."

Another email said: "The (gold) coloured coat of arms and the removal of the Canada wordmark is not a good practice."

Yet another email read: "None of these additional requests follow the TBS (Treasury Board Secretariat) rules. ... Although we can certainly continue to advise and express our concerns, we will not be able to hold off on these for long."

Bureaucrats were so concerned about what they were being asked to do they wrote a "disclaimer" for Baird's chief of staff to sign to make clear that the minister had been advised against his requests.

The disclaimer noted that the Treasury Board over the years has changed some practices: "Among the casualties were the costly and difficult practices of using gold foil or full colour reproductions of the Arms of Canada on ministerial stationery."

It added: "The wordmark (Canada) is a requirement for ministers, parliamentary secretaries and their offices. ... It is worth noting that the prime minister and his office follow these standards."

Despite the concerns, Baird was granted exemptions for the card design. But the department printed a second, bilingual card without the gold embossing and wordmark. That card cost $197.75.