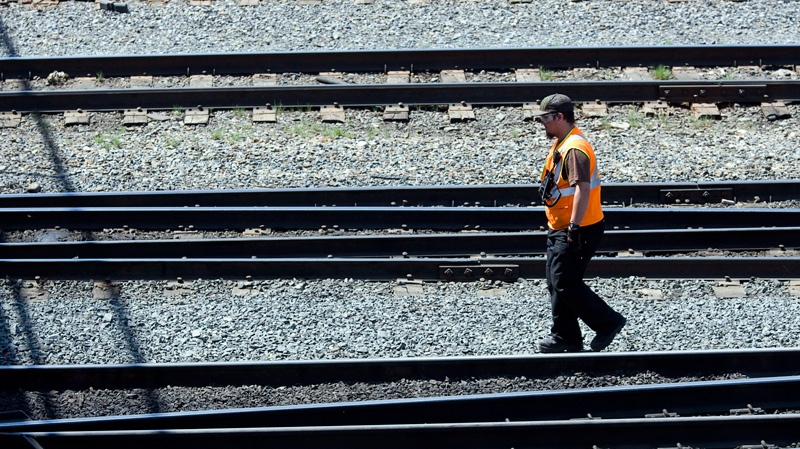 A Canadian Pacific Railway employee walks along the track at a marshalling yard in Calgary, Wednesday, May 16, 2012. (Jeff McIntosh / THE CANADIAN PRESS)

Some 4,800 locomotive engineers, conductors, yardmen and others walked off the job nine days ago, crippling the country's biggest freight rail carrier.

CP Rail said the company's plan was to have cars rolling 12 hours after the bill received royal assent. The union representing the workers issued a news release late Thursday saying it disagreed with the law, but was advising its members to obey it and report for work Friday morning.

Even before the final Senate vote, VIA Rail, which uses some CP track, was informing customers that service would return to normal Friday, with the exception of a northern Ontario route that will be back on line Saturday.

"We have lost nine days of loading," Raitt told an emergency debate in the upper chamber Thursday afternoon, where she was making a last pitch to speed through the legislation.

By way of illustration, Raitt said there are six ships currently in the port of Vancouver awaiting overseas grain shipments, and another eight ships are on their way to Vancouver. Each ship requires half a day to load.

"Even when the trains do start rolling it will take weeks for the backlog to clear, and customers don't forget this," said Raitt. "This is a setback from which it could take years to recover lost business and lost investments."

The bill sends the labour dispute to a government-appointed arbitrator, who has 90 days to impose a deal on the two sides -- unless they can negotiate one themselves in the interim.

The Harper government has been both lauded and criticized for swiftly ending the labour disruption, which Raitt claims cost the economy half a billion dollars a week.

But Thursday's emergency committee-of-the-whole in the Senate -- the only parliamentary body to actually hear witnesses on the contentious back-to-work bill -- offered several surprises.

"This bill is fair. It is a fair bill. It gives us an option or a chance to perhaps get a good deal," Phil Benson, a lobbyist representing the Teamsters Canada union, told the Senate.

"I firmly believe if that elephant hadn't been in the room -- the previous back-to-work laws -- we wouldn't be here. I really believe we would have had a deal," said Benson.

Conservative Senator Hugh Segal agreed, although he framed the issue more broadly as a long-standing pattern of back-to-work bills by successive governments, Liberal and Conservative.

Segal asked Raitt whether her legislation would "further feed the pattern that there is no real need for either side to give or bend or reach or stretch to achieve a negotiated settlement" because they know the government will ultimately step in.

Raitt, to her credit, called the repeated precedents "troubling."

"Being in government, you have to make tough decisions," she added.

Raitt said that companies and unions should agree to arbitration of their own making, rather than "essentially roll the dice and let a body in Ottawa determine how an important issue like pensions are going to be decided for the future or your company."

Pensions appear to be at the heart of the CP Rail dispute.

Peter Edwards, the company's vice-president of human resources and industrial relations, testified the company has poured $1.9 billion over the past three years into solvency deficits in the pension fund, with no end in sight.

And he noted the pension plan tops out at $93,000 a year for a locomotive engineer, compared to $60,000 for an engineer at competitor CN.

Benson, speaking for the Teamsters, later noted that no CP engineer had actually ever reached the pension cap -- although management employees do and their pension is not on the table.

Liberal Senator Larry Campbell forced Edwards to acknowledge it was CP management that included the escalator cap in the pension some years ago.

In the testiest exchange of the day, Campbell said the back-to-work bill is saving the company from itself.

"What we're being asked to do basically is help you out of a huge bind that's of your own making," said the senator.

The Liberals in the Senate voted against the legislation but were easily out-voted by the Conservative-appointed majority.