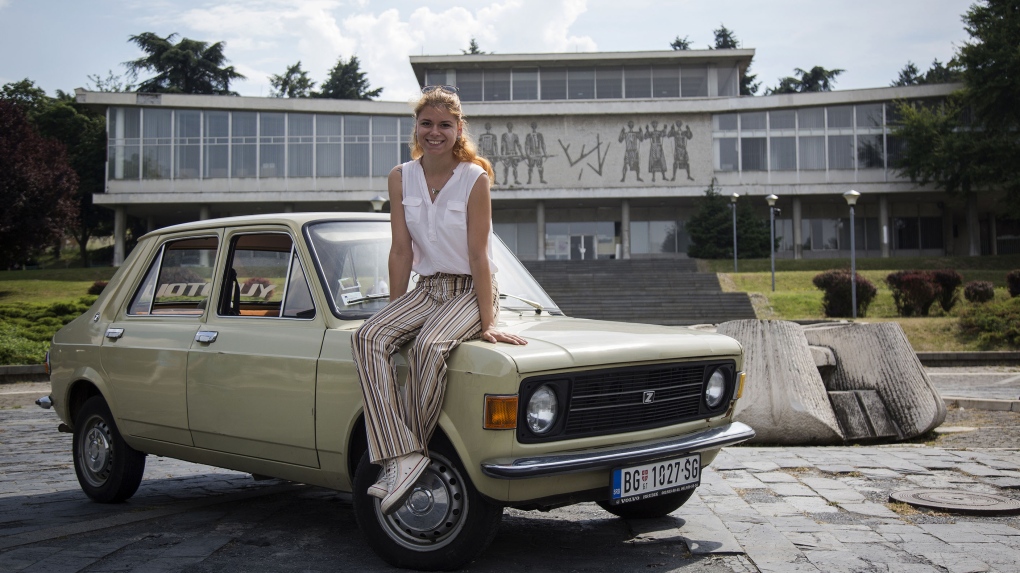 "Join us comrade!" tourists are warmly greeted, as they climb into a vintage car that is no longer produced for a visit back in time to a country that no longer exists.

As a symbol of the former Yugoslavia, the Yugo car is back in vogue on Belgrade's streets.

Like in other places once stranded behind the detested Iron Curtain, the Serbian capital has found a unique way to cater for a surge in interest and even nostalgia for life under communism.

On a three-hour tour, visitors see some of Yugoslavia's most significant sites, seated in one of the once ubiquitous Yugos, ending up at the Museum of History of Yugoslavia which holds dictator Josip Broz Tito's mausoleum.

"People come to experience rides in an iconic car and it is something they cannot experience anywhere else in the world actually," Jovana Stojiljkovic, who manages the Yugotour travel agency, told AFP.

The last Yugo cars were produced a decade ago, but, says Stojiljkovic, they are still a hit among tourists for the "Rise and Fall of a Nation" tour, on which most clients are foreigners.

"It's something similar to a Trabant (East German car) tour in Berlin," she says.

For vintage car aficionados, Belgrade has a lot to offer, with sightings of American Chryslers or Ford limousines not uncommon.

And for the handful of "Made in Yugoslavia" makes of car, thousands still rumble around on Balkans roads more than 25 years after Yugoslavia's collapse.

As well as the Yugo, the small Fica and Zastava 101, all produced at the Zastava plant in the central town of Kragujevac, were the pride of communist Yugoslavia.

They were highly popular due to their low price.

But the Yugo car was also often the butt of jokes over its design and unreliability.

It even appeared in the 1995 Hollywood blockbuster "Die Hard With a Vengeance" with Bruce Willis and Samuel L. Jackson.

Now it is tourists from all over the world climbing into the Yugos, which in their heyday were exported from Yugoslavia to 74 countries, including Egypt, India and even the United States.

Described by the communist authorities as the "deal of the century" for the US market, the Yugo had only limited success there, however.

When Stojiljkovic was born in 1992, Yugoslavia had already fallen apart in a series of bloody wars and most of its republics were already independent states.

But by the age of 25, she had launched a career in preserving the memory of the Socialist Federal Republic of Yugoslavia (SFRJ) and telling its story, coinciding with a wave of "Yugonostalgia" among some for a period viewed as having enjoyed peace and relative prosperity before the onset of the conflicts.

Dennis Bertelsen, a 38-year-old Dane on a weekend visit to the city, was among the hundreds of thousands of tourists descending on Belgrade -- it hosted one million last year, 835,000 of whom were from abroad, according to official figures.

With his three friends, he said he took the tour "to get a view of the history and what actually had been the development and downfall of Yugoslavia".

The itinerary includes passing by the famous Hotel Jugoslavija on the Danube river bank, one of the country's most luxurious at the time.

The hotel has been out of service since it was hit in a 1999 NATO bombing campaign to force the then Serbian strongman Slobodan Milosevic to withdraw his troops from Kosovo but the building still has a mythical status.

Polish student Dominik Wojciechowski came across the tour while researching the Fica car for his photo-art project on so-called Yugonostalgia, a feeling still present in all the countries that emerged after Yugoslavia's collapse, although much less in Croatia where a national sense of being Croat is ultra dominant.

"I am interested in this process of commercialization of Yugonostalgia and how people today are trying to preserve knowledge of Yugoslavia, while the older generation even (attempts) to return to these times," the 25-year-old said.

For him, the most impressive part of the tour was a 30-floor twin tower called Genex, or Western Gates of Belgrade, still among the tallest in the city.

"You stand below it and look up how big it is and feel this grandiosity of Yugoslavia and how powerful it was," he said.

Most tourists know very little about Yugoslavia, its 22 million people and dictator Tito who led it from the end of the Second World War until his death in 1980.

A decade later, the federation comprising six republics -- Bosnia, Croatia, Macedonia, Montenegro, Serbia and Slovenia -- collapsed in a series of wars that claimed more than 130,000 lives.

Although Stojiljkovic never lived in Yugoslavia she said she nevertheless knows a lot about it.

"I have heard all the stories from my parents, their friends and the rest of my family, so based on their experience it was a really nice time, they had a good time," she said.

And she herself is now the proud owner of two Fica cars, which, she said, was "to show to the rest of the world what they meant to us".