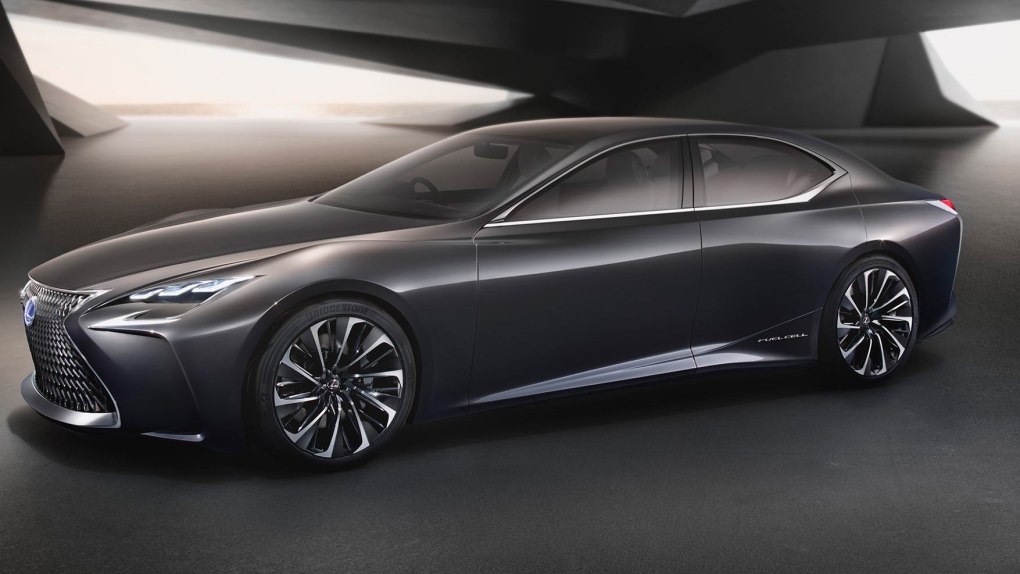 The Lexus LF-FC concept is the clearest idea yet of what to expect from the next generation LS luxury sedan. (Lexus)

It was an open secret that Lexus would be showing off a new concept pointing to the future direction of its LS executive sedan. However, no one was expecting the LF-CF, unveiled to the world's motoring press in Tokyo on Wednesday, to feature a hybrid hydrogen fuel cell rather than a big V8.

"Lexus wants to surprise and evoke emotion with its distinctive design and forward-looking technology," said Tokuo Fukuichi, Lexus International President. "The LF-FC expresses our progressive luxury and high-tech vision of a not so distant future."

From the outside, the concept car is much more striking and flowing than any current Lexus and much more in keeping with the current design trend for bringing coupe-like lines and proportions to the large sedan market -- think Mercedes CLS, BMW 6 Series Gran Coupe and of course, the Audi A7.

But Lexus claims that the shape should evoke more than just GT thoughts, but GT performance too. This concept is meant to be as agile in the bends as it is comfortable on the straight.

And this is down to the hydrogen fuel cell drivetrain powering electric motors that in turn drive each of the four wheels individually. This sort of set-up in itself isn't revolutionary: the Porsche 918 Spyder and upcoming Honda Acura NSX have clever torque and power juggling electric motor systems for boosting acceleration, improving grip and keeping the body stable and less prone to rock and roll.

What makes the Lexus stand out is that the motors are powered via a hydrogen fuel stack rather than electricity from plugging in and charging up a battery and filling up a traditional internal combustion engine with fuel.

In cruise mode, the chemical reaction of oxidizing hydrogen generates electricity that drives the rear wheels and charges the batteries that power the front wheel motors. However, floor the pedal and the car jumps into acceleration mode, bringing both the fuel cell plus the power stored in the batteries online together for rapid progress and all-wheel grip.

Inside, the car is packed with next-generation gesture recognition technology and semi-autonomous driver aids and there are the obligatory touchscreen interfaces, for both front and rear passengers. But, thankfully none of it is overpowering or so blatant in its presentation that it detracts from the quality and feel of the leather adorning the seats or the use of book-matched wooden veneers on door panels and facia.