Hyundai's recall of 82,000 electric cars is one of the most expensive in history 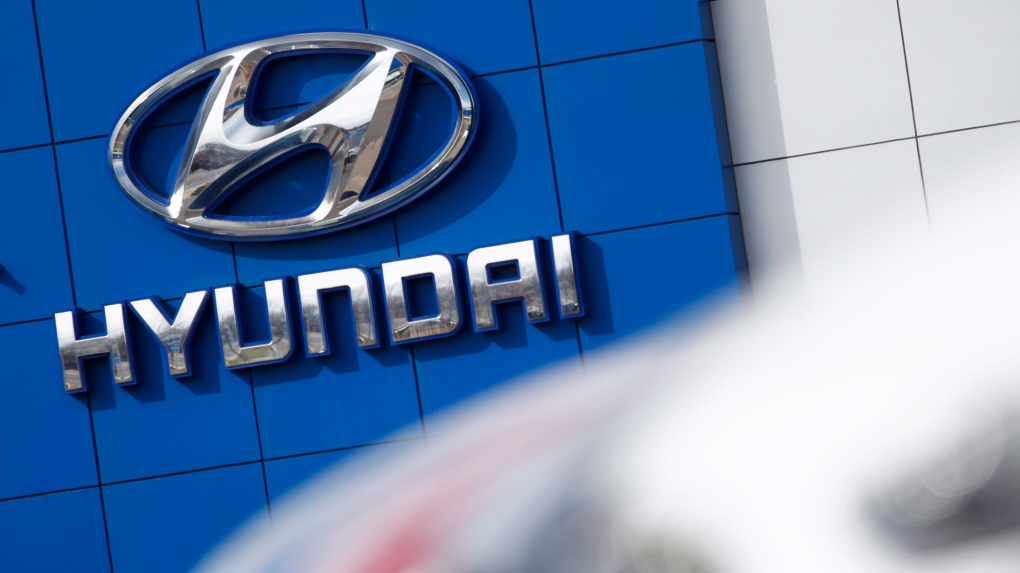 In this April 15, 2018, file photo the company logo hangs on the side of a showroom as a long row of unsold 2018 Sonatas sits on a Hyundai dealer's lot in the south Denver suburb of Littleton, Colo. (AP Photo/David Zalubowski)

Hyundai will recall 82,000 electric cars globally to replace their batteries after 15 reports of fires involving the vehicles. Despite the relatively small number of cars involved, Hyundai's recall is one of the most expensive in history, signaling how electric car defects could create hefty costs for automakers -- at least in the near future.

The recall will cost Hyundai 1 trillion Korean won, or US$900 million. On a per-vehicle basis, the average cost is $11,000 per car -- an astronomically high number for a recall.

Replacing an entire battery is an extreme measure, requiring a similar amount of work and expense as replacing an entire engine of a traditional internal combustion-powered car. Very few recalls of gasoline powered cars require an entire engine to be replaced. One of the few examples was a 2014 recall of 785 of the Porsche 911 GT3 sports cars. Porsche did not release the cost of that recall, but it is certainly more expensive on a per-vehicle basis than this Hyundai recall.

Still, a recall costing more than $11,000 per vehicle is extremely rare. Precise figures are not available because most automakers do not disclose the cost of their recalls.

Because there are so many more gasoline-powered cars on the road than EVs, the total cost of their recalls can easily exceed the $900 million cost of this Hyundai recall. For example General Motors recently took a $1.2 billion charge for the cost of replacing Takata airbags, but that covered 7 million vehicles, meaning the recall cost less than $200 per vehicle. The average cost of an auto recall over the last 10 years was about $500 per vehicle, according to Mike Held, a director in the automotive and industrial practice at AlixPartners, a global consulting firm.

"Overall, battery safety and durability will be increasingly important if auto companies want to avoid some of the large battery-recall costs that have befallen the consumer-electronics industry," he said.

The cost of Hyundai's recall is another indication of just how expensive EV batteries are relative to the the cost of the entire car. Until the cost of the batteries come down, through greater production worldwide and economies of scale, the cost of making electric vehicles will remain higher than comparable gasoline cars.

Once the batteries do become cheaper, as predicted for the coming years, EVs could become much cheaper to assemble because they have fewer moving parts and as much as 30% fewer hours of labor needed for assembly.

The fewer parts on the EVs could also mean that recalls should be less common than for traditional internal combustion-powered cars. But in the near term, there could be significant costs if battery fire problems cause battery replacements.

No one was injured in any of the fires, many of which took place after the cars were shut off and the cars were empty. None of the fires took place in the United States. The US National Highway Traffic Safety Administration estimated last October there are 6,700 electric Hyundai Konas, the US version of the affected vehicles, on American roads.

The recall also covers the Ioniq EV, and Elec City vehicles in South Korea. The recall includes 27,000 Korean vehicles and 55,000 elsewhere in the world.

Fires involving EV batteries are not unique to these vehicles. GM is also recalling an earlier version its electric Chevrolet Bolt because of fire problems caused by its own LG battery, although a different model that the one in the Hyundai recall.

GM is not replacing the batteries in 68,000 Bolts being recalled globally. Of that total, nearly 51,000 are in the United States. While the automaker isn't saying how its problem will be addressed, it is likely to be handled with a software update.

Tesla also had a problem with battery fires early in its history, but that was tied to damage to the batteries from debris on the road kicking up. The batteries of most EVs are across the bottom of the car. Tesla dealt with the problem by installing more shielding for the batteries.

Gasoline or diesel cars also present fire risks, typically after accidents when drivers and passengers are still in the car, which poses a greater safety threat.

Hyundai said it is still in talks with battery supplier LG Energy Solutions, as to which company will be responsible for how much of the cost. The Korean Transport ministry seemed to blame LG for the fire problem in its statement on the recall, attributing them to a misaligned battery cell.

But LG's statement, which said it will cooperate with the Korean Transport Ministry's ongoing investigation, denied it was the reason for the fires.

"The fire was not recreated in the lab test, and the issue was an early mass production problem in Hyundai Motors dedicated line," said LG's statement. It said it "will further strengthen safety in all processes from product plan to manufacture and inspection."