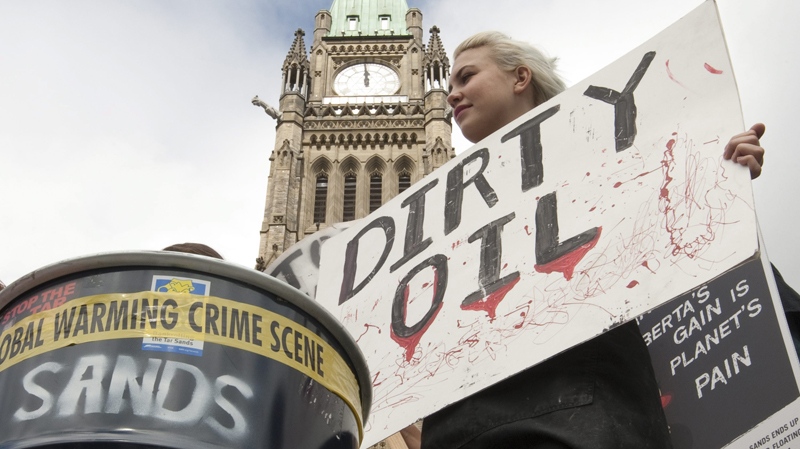 Approximately a dozen protesters gather on Parliament Hill to demonstrate against the Alberta oil sands in Ottawa, Wednesday, Sept. 8, 2010. Meanwhile, Nancy Pelosi, one of the most powerful lawmakers in the United States, has come to Canada's capital to chat about the oilsands with premiers and federal officials. (Adrian Wyld / THE CANADIAN PRESS)

CALGARY - Alberta is suffering an "image deficit" over criticism of the province's oilsands and provincial Conservatives called for a new campaign to minimize the damage to business and tourism.

A resolution introduced at the Alberta Progressive Conservative Convention on Saturday argued that sophisticated and well-financed environmental organizations and special interest groups are having success in attempts to redefine Alberta's image in "extremely negative" terms.

It says Alberta's efforts to counter "nefarious public relation campaigns" have been ineffective and both industry and government must work together to come up with a new strategy to turn the tide of public opinion.

"Unless you've been living on another planet you've probably heard all sorts of comments about Alberta's oilsands industry which is really part of the backbone of our economy. We think it's very important to engage industry and government," said Stephen Hope, a delegate from the riding of Calgary Shaw who introduced the resolution.

"The purpose of the collaboration is to create and develop a new and effective image of the province that will be the basis of countering these smear campaigns."

The vote in favour of the resolution was unanimous.

But Alberta Premier Ed Stelmach told delegates he is satisfied with the strategy currently in place and that he has no intention of replying in kind to the negative campaigns.

"We cannot use the dirty tactics of those with extreme and unreasonable positions," said Stelmach.

"Nor will we give them what they want, which is attention. So we're going to continue to tell it like it is."

Environment groups such as Greenpeace and the Sierra Club have made a concerted push in recent months to have the impact of the oilsands displayed on the international stage.

The state of the downstream watershed in the oilsands is now being reviewed by a panel of scientists set up by federal Environment Minister Jim Prentice. The panel is to report back before the end of the year.

Hollywood film director James Cameron renewed interest in the issue earlier this year when he toured the oilsands region as part of his growing concern with environmental issues.

Cameron, maker of blockbuster hits such as "Titanic" and "Avatar," said the long-term effects of the oilsands still must be studied. He also said the health concerns of the people in Fort Chipewyan, downstream of the oilsands, need to be addressed immediately.

Stelmach said Alberta has been having success getting its message out by meeting with visiting government and business leaders. He added he's sent ministers, caucus members and senior officials across Canada, the U.S. and Europe to tell Alberta's story.

"Most Americans don't know where Alberta is but they do know that every time the price of energy goes up it effects them personally. That's the number one issue," he said.

"The number one issue for any elected official in the United States is how do you grow jobs and have affordable energy so we can continue at least some modest growth in the economy."

Stelmach intends to continue to spread the message when he embarks on a trade mission to India next week.

The weekend convention is focusing almost entirely on the next provincial election. Stelmach wants all candidate nominations completed by the end of June, 2011. But he said he has no intention of calling a snap election.

"It will be in spring of 2012. Generally it's every four years and as I said I'm not the sort of individual that governs according to polls."

Stelmach said he is keeping a close eye on efforts by the Harper government to balance its budget and the impact it could have on the provinces.