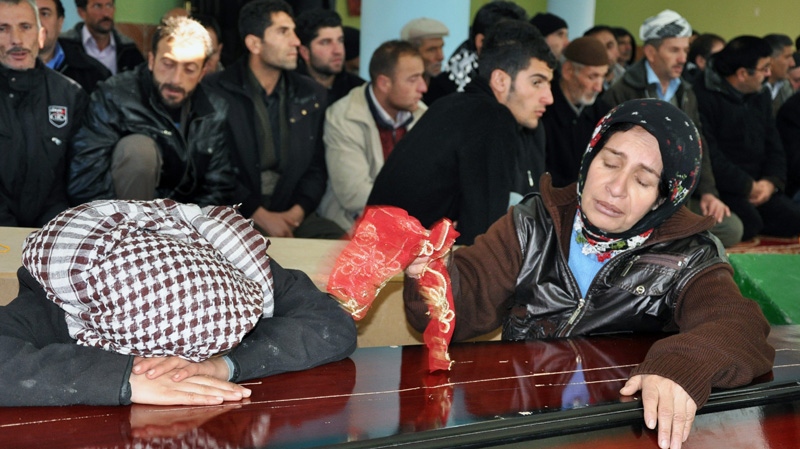 In this Friday, Dec. 30, 2011 photo, women cry over the coffins of victims in a mosque as thousands of mourners gathered in Gulyazi village at the border with Iraq, southeast Turkey, for the funerals of 35 Kurdish civilians who were killed in a botched raid by Turkish military jets that mistook the group for Kurdish rebels based in Iraq.

ISTANBUL, Turkey - Angry Kurds on Saturday assaulted a local official who sought to offer condolences in a village in Turkey where 35 civilians were mistakenly killed in a military airstrike meant to target Kurdish rebels.

The televised spectacle of men throwing punches and stones at Naif Yavuz, a district governor, was the latest eruption of fury over Wednesday's airstrikes, and it highlighted the deep gulf of trust between the Turkish state and large segments of its ethnic Kurd minority.

Clashes also broke out for a third day between police and protesters in several cities in the mainly Kurdish southeast, the state-run Anadolu agency reported. Thirty-six people were detained in the city of Sanliurfa. There were peaceful protests in several other cities.

The strikes by F-16 jets, guided by intelligence from drones, hit a group of Kurdish smugglers and resulted in one of the highest single-day civilian death tolls in Turkey's decades-old war with Kurdish rebels, setting off several days of violent demonstrations in mostly Kurdish cities.

The rebel Kurdistan Workers' Party, labeled a terrorist group by Turkey and the West, threatened retaliation and urged protesters to mobilize. The group, however, is considerably weakened since the peak of its military powers in the 1990s and its influence is largely confined to the poor southeast, where calls for autonomy and an end to discrimination resonate most strongly.

"No one should have any doubt that their blood will be avenged. The Kurdistan freedom movement will make sure that this massacre is accounted for," Firat, a pro-Kurdish news agency, quoted rebel commander Murat Karayilan as saying.

"If the Kurdish people do not want their children to die, they must now say 'enough' and they must rise up everywhere and go out in the streets," said Karayilan, who is based in the mountains of northern Iraq.

Kurdish rebels have routinely used the border region to launch attacks on Turkish targets, slipping into Turkey on some of the same rugged paths used by fuel and cigarette smugglers for years.

Turkish officials have promised a full investigation into the botched airstrike, and said those responsible will be held to account. Prime Minister Recep Tayyip Erdogan telephoned the families of the victims in the village of Gulyazi in Sirnak province to express condolences, and his voice was broadcast through a loudspeaker.

"We share your grief, your pain is our pain," the Anadolu agency quoted Erdogan as saying. "Everyone must rest assured that all kind of work is under way in relation to the issue."

The Show TV channel showed one man telling Erdogan on the telephone: "They didn't deserve to die in this way."

Erdogan replies: "The issue is not that they were smugglers. You know the area, it is a very sensitive area, it is not possible for them (the military) to recognize each and every person."

Footage from the Dogan news agency of the visit of Yavuz, the district governor, revealed the bitter feeling toward figures representing the state in a province where the conflict has long disrupted life.

The images show men booing, lunging forward and pummeling Yavuz as his aides try to hustle him down a road lined with parked cars and bleak, snow-covered slopes. At one point, dazed and disheveled, he runs down an embankment to get away from the crowd. Yavuz was taken to a hospital for a checkup, according to reports.

Deputy Prime Minister Besir Atalay visited bereaved families in a house and told Anadolu that members of a "party," an apparent reference to political activists, provoked the attack on Yavuz and that the families were disturbed by the incident and apologized for it.

Opposition leader Kemal Kilicdaroglu, who plans to visit the region on Sunday, said the government has yet to explain how the intelligence that led to the airstrike was compiled, and who exactly was involved.

"It seems that the incident was caused by incorrect intelligence," he said. "Who provided this intelligence to the military headquarters? They say no country would bomb its own people, but it has. Who will account for this?"

Turkey's National Intelligence Organization, known by its Turkish acronym MIT, has denied reports it provided the information that led to the airstrike.

The United States recently deployed four Predator drones to Turkey from Iraq to aid Ankara in its fight against the rebels.

Also Saturday, Turkish media reported that two suspected Kurdish rebels were killed in a police raid in Diyarbakir, the main city in southeastern Turkey. The Anadolu agency said the rebels ignored calls to surrender and threw hand grenades at police surrounding their hideout. A firefight ensued, and the suspects died after jumping out of the building.

The Turkish government has sought to reconcile with disaffected Kurds, allowing Kurdish-language institutes and private Kurdish courses as well as Kurdish television broadcasts. But Kurdish activists cite police roundups of Kurdish politicians, journalists and others suspected of rebel links as a sign of intolerance toward the minority.