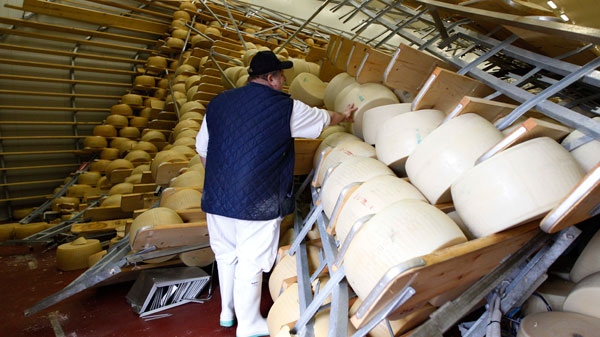 Oriano Caretti looks at the overturned shelves with Parmesan wheels in his Parmesan cheese factory in San Giovanni in Persiceto , Italy, Monday, May 21, 2012. (AP / Luca Bruno)

SANT'AGOSTINO DI FERRARA, Italy - Cheese producer Oriano Caretti woke up to the shaking earth, and then to the roar of some 30,000 39-kilogram wheels of Parmesan cheese crashing to the ground in the warehouse next to his home.

The 6.0-magnitude quake north of Bologna that killed seven people and toppled centuries old buildings also caused enormous damage to the region's world-renown cheese production. The Coldiretti Italian farm lobby said 400,000 wheels of Parmesan and Grana Padano cheese were damaged when the racks where they are aged collapsed.

"Considering that what you see here represents the work of seven companies for two years, this means that the repercussions on the rural economy of these farms and this territory will feel it pretty badly," Caretti said Monday inside the cheese factory, where wooden shelves were still collapsed from the quake. Only one rack of 16 remained standing.

Many of the wheels looked unscathed, but workers were still trying to determine what could be salvaged before mould sets in.

The quake struck 4:04 a.m. Sunday, when most residents in the quake zone north of Bologna were asleep -- and residential buildings in an area unaccustomed to quakes largely withstood the temblor.

But factories in the region were at work despite the economic crisis that has sent Italy into recession and despite the hour, and many collapsed. Four of the seven dead were workers on the overnight shift who were buried in rubble, including two at the Ceramica Sant'Agostino tile company. The other three victims -- including a German tourist and an Italian centenarian -- died of heart attacks or other health conditions brought on by fear.

Family-run Ceramica Sant'Agostino, which employs 350 workers to produce 23,000 square meters of tiles a day for global distribution, has been idled while inspectors determine if the structures on the sprawling site are safe.

"Despite the enormous blow, Ceramica Sant'Agostino is determined to restart production as soon as possible, above all to honour the memories of those who are no longer here," the company said in a statement.

The fatal collapse of at least three factories has raised concerns about the safety of even recently built industrial structures in the region. Ceramica Sant'Agostino said its buildings adhered to "maximum safety" and that it was fully co-operating with inspectors.

Many of the region's landmarks also suffered considerable damage, including the city hall of Sant'Agostino and the 13th century clock tower, which was split vertically in half, of Finale Emilia.

"The historic centre has completely collapsed. I would have never imagined that such a thing could happen in Finale. We never thought such an earthquake could hit the city," said Stefano Pignatti, a resident of the small town, surveying the damage.

The last big quake to hit the region was in the 1300s.

In terms of economic impact, the artisanal cheese sector appears to be the hardest hit. At least 10 per cent of Parmesan production has been impacted, according to early estimates by the Parmigiano-Reggiano Cheese Consortium, which annually generates C1.2 million in production revenues and C1.9 billion in consumer sales.

In all, some 10 collective Parmesan aging warehouse and cheese production sites have sustained damage in the quake, affecting 300,000 wheels, half of which are estimated to be at least a partial loss.

"The fallen forms in some cases can certainly be recovered and moved to another warehouse to finish aging," consortium spokesman Igino Morini said. Partially damaged wheels may be salvaged for mixed cheese products or prepackaged foods -- at a fraction of their value as fully aged Parmigiano-Reggiano.

Despite the considerable work of sorting damaged wheels, the Carettis already were producing new cheese on Monday.

"Cows produce milk and it needs to be transformed," Caretti said.

Meanwhile, civil protection crews were checking government buildings, schools, businesses, homes, churches and other cultural heritage sites to evaluate the exact scale of damage and rebuilding costs. Some 4,500 people have been displaced by the quake.