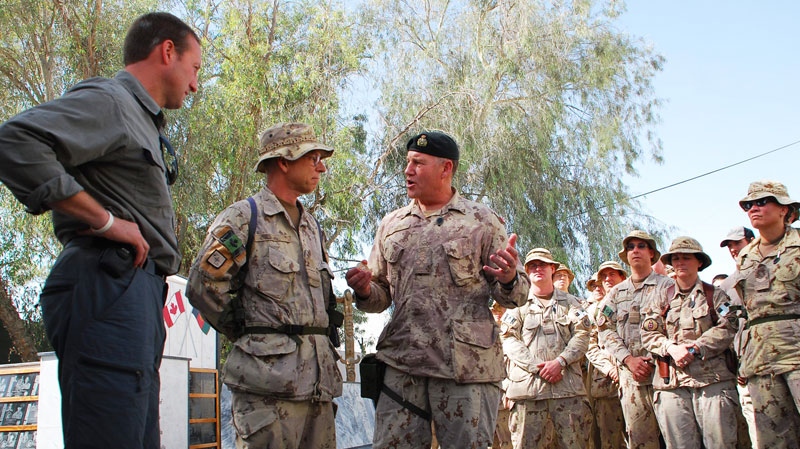 OTTAWA - The country's top military commander says the Canadian Forces has a plan to withdraw from Afghanistan and he's confident it will work -- despite the loss of a key transit base.

Gen. Walt Natynczyk, chief of the Defence staff, told a Commons committee it will be challenging to return all equipment from Kandahar, but it will be done on time.

Parliament has mandated that combat operations end next July and that the army withdraw from the embattled province by the end of next year.

Before meeting with the committee, Natynczyk said the military is working to deal with the impending closure of a base it has been using in the United Arab Emirates since the beginning of the war.

The U.A.E. ordered Camp Mirage closed in a dispute with the Harper government over airline landing rights.

Defence Minister Peter MacKay said there will be a seamless transition between Camp Mirage and alternate base, which he didn't identify.

Defence sources say two bases -- one in Cyprus, the other in Germany -- can be used as staging points for the withdrawal.

Natynczyk also wouldn't confirm the locations, but said negotiations are underway to finalize arrangements. He said it's unclear how much the withdrawal will cost, or what kind of impact the closure of Camp Mirage will have on the numbers.

Liberal foreign affairs critic Bob Rae accused the government of bungling relations with the U.A.E. and pointed to the fact that Foreign Affairs Minister Lawrence Cannon hasn't met with that country's ambassador.

Cannon dismissed the criticism, telling the committee that he met with the U.A.E. foreign affairs minister on a number of occasions.

"I'm telling you I met with his boss, the minister. Is that clear?" he responded in a testy exchange. "I prefer to meet with the foreign minister who is the authority."

The issue of the military base, which the U.A.E. has allowed Canada to use without charge for almost a decade, did come up, Cannon said.

"We had a robust discussion and we intend to maintain excellent relations."