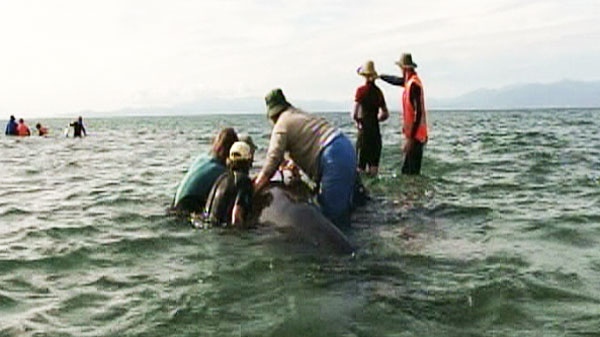 WELLINGTON, New Zealand - Seven long-finned pilot whales died after being beached in New Zealand, but rescuers were confident Saturday they had saved the other 18 marine mammals that stranded.

Seven of the 25-strong pod died after they stranded late Friday on Farewell Spit at the northwest corner of South Island, conservation officials said.

The surviving whales were floated off the beach at high tide. They were well offshore by late Saturday afternoon and heading toward deeper waters after earlier swimming north toward more shallow waters on the ebbing tide, said John Mason, area manager for the Department of Conservation.

"They were quite lethargic at the start and ... we thought they could well strand on the outgoing tide," he said.

Boats were used to try to point the whales to deeper waters, and people got into the water to encourage the animals to head toward the deep sea, Mason said.

"Then, just in the nick of time, they started moving eastward out of danger, and they're now well off Farewell Spit tracking southward into deeper water," he told National Radio.

Mason said the pod's movements will be tracked during the night because there was still a risk the whales could come back into the shallow waters of the long, sloping headland spit area.

But he said he was "confident" the 18 pilot whales wouldn't restrand.

Project Jonah whale rescue group chief executive Kimberly Muncaster said volunteers would be checking beaches to "help locate further strandings before it is too late to save the animals."

New Zealand has several whale strandings along its coastline each summer, with mass strandings of as many as 450 whales occurring. Since 1840, more than 5,000 strandings of whales and dolphins have been recorded on New Zealand's coast.

In November, 47 pilot whales died and 18 were euthanized after they stranded on tidal flats at the tip of Farewell Spit.

Whale experts have been unable to explain why the mammals swim into dangerously shallow waters.